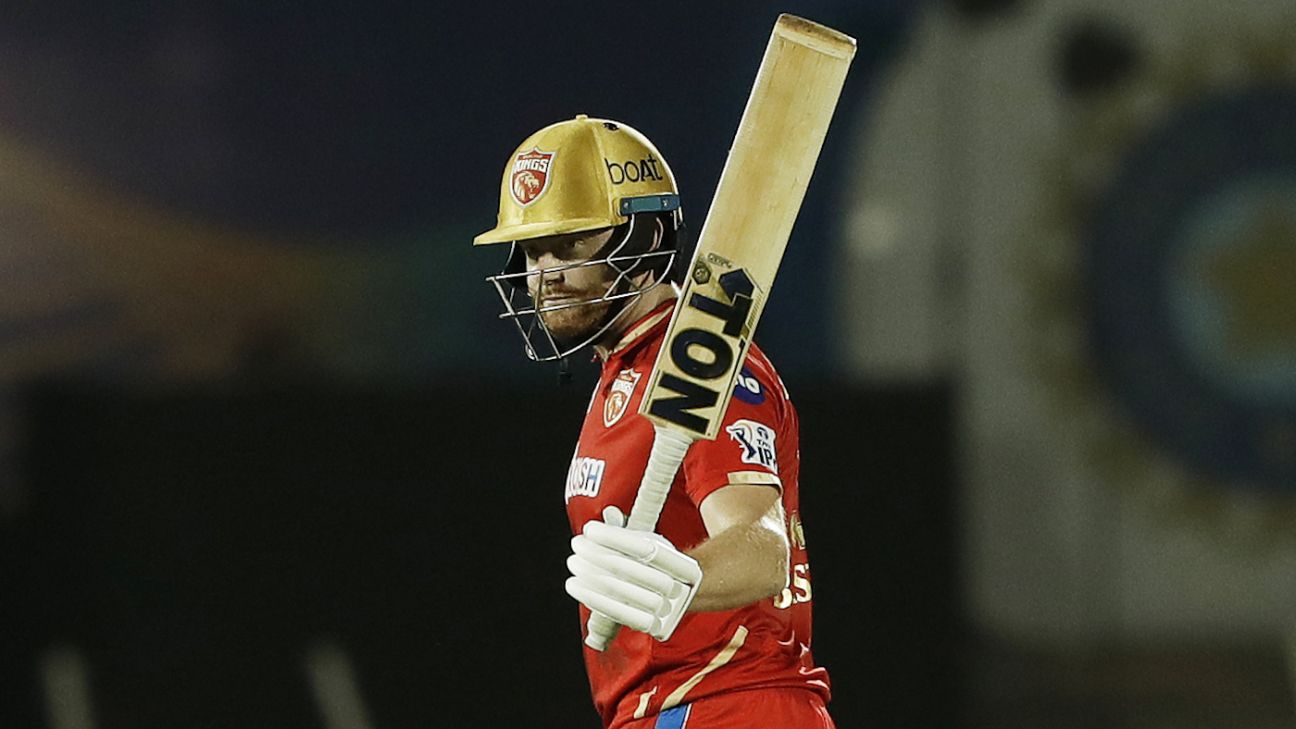 If you looked at Jonny Bairstow’s numbers coming into this match – 136 runs in eight innings at a strike rate of 117.24 – you’d be justified in thinking he has had a tough tournament. These batters, though, can’t get so attached to numbers if they are to play proper T20 cricket.
“It depends on what you class as a tough tournament really,” Bairstow said, when asked about his “tough tournament” leading up to his 29-ball 66 that set Punjab Kings up for a big win. “Because obviously I have been caught at fine leg twice, third man once, and run out on 19.5 overs so there is a difference in being unselfish and it being a difficult competition. I am happy with the way I have transitioned to opening the batting. It has been very enjoyable being back at the top.”
Related
This is a welcome change, that batters are looking at their numbers with the added lens of intent and luck. Getting caught on the boundary is better than getting out looking for a single, and knowing that when you do actively look for boundaries you need a bit of luck to go with your skill. If it doesn’t come off, don’t get too down on yourself. To get batters to recalibrate success and failure along those lines has been one of the bigger challenges for T20 coaches.
What Bairstow did on Friday was sensational. He scored 59 runs in the powerplay, taking down Royal Challengers Bangalore’s banker bowler Josh Hazlewood. To Bairstow, not a lot was different.
“Just think that sometimes there is balls in your area, and you have to try to take advantage of that,” Bairstow said. “Sometimes it is fine lines where you might get caught on the boundary, just inside the rope, or you might get a thin edge on another one. Today was a good day. Was happy to take advantage of the powerplay.”
It was especially important because Kings as a side have been given reason to doubt their cavalier approach this year. It is tough to remain philosophical about your method if the results are not going your way. Kings have often found themselves unable to maximise the death overs because they have gone too hard looking for a point of difference early on. To keep believing in that process is important but also difficult.
“That has been generally been the ethos of how we have tried to go about all of the tournament,” Bairstow said. “That has been the way in which the guys want to go about the process of the game. You may have noticed sometimes we have lost wickets in clusters in the middle, which has stifled our progress on from there, but I think on the whole that was the way we wanted to try and go about I for a majority of the tournament. It doesn’t happen all the time but if we can do it more often than not, then hopefully when a couple of people stand up we can get that job done.”
Liam Livingstone, who followed up Bairstow’s effort with 70 off 42, agreed. “It’s how we want to play our cricket,” Livingstone said. “Jonny was outstanding and really set the tone. From then on we were ahead of the game. It gave us a chance to probably – especially myself – get in and assess the conditions for a little bit longer than usual. So it was nice to be able to knock it around for a little bit before setting the platform to go at the end. Jonny set it up perfectly for the rest of the batters.
“If we get our chance of putting the opposition under pressure then [we want to] make sure we do that. I think Jonny did that perfectly today. To one of their best bowlers [Hazlewood]. I think the intent that he showed in his first over put us way ahead of the game. Not just within the game but mentally as well.”
Tags: Indian Premier League, Jonny Bairstow, Liam Livingstone, Punjab Kings, Punjab Kings vs RCB