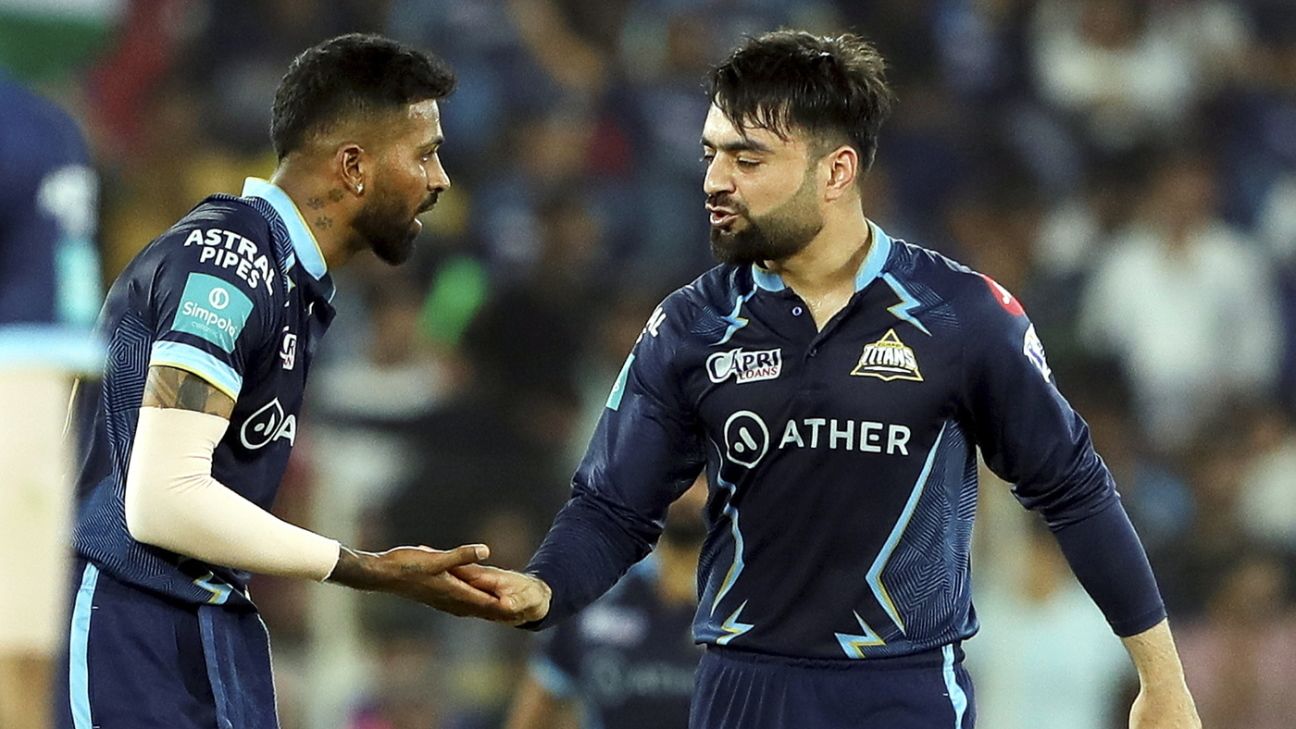 Gujarat Titans, playing their maiden IPL, topped the league stage, won the first qualifier, and then cruised to victory in the IPL 2022 final against Rajasthan Royals in Ahmedabad. Here’s how some of their key personnel reacted to their glory run.
David Miller (481 runs at 68.71): “It’s been a phenomenal journey. Finishing at the back-end was pretty special and being there in the moment [of victory]. It has been a collective effort, everyone’s stuck their hand up in key moments. One of the best rides I’ve ever had. It has been a relaxed environment led by [head coach] Ashish Nehra and [captain] Hardik [Pandya]. Hardik has gotten better and better as the season has gone on. He’s tactically been really good, led with both bat and ball.”
Related
Gary Kirsten, batting coach and mentor: “[Hardik has been] fantastic. He’s a high-profile guy in India, but he’s been incredibly humble. Wants to learn as a leader. Especially in IPL and in India, he wants to help youngsters. He’s come in with real responsibility, very different to seeing him in other IPLs. Great for Ashish and [team director] Vikram [Solanki] as well. Brand new franchise, to put a team together and get guys performing – amazing.”
Hardik Pandya (487 at 44.27 and eight wickets at 27.75): “I wanted to show what I have worked hard for, and today was the day from my bowling point of view, I saved the best for the best [stage]. I think [that] the second ball of my spell that I bowled, after getting Sanju [Samson] out, I saw that if you hit the wicket hard and if you bowl in on the seam, something is going to happen. So, for me, it was all about sticking to the right lengths and asking the batters to play a good shot rather than me trying something and giving a boundary.
“Any given day I’d take the trophy than me batting at 160 or 170 [strike rate], team is the most important, whichever team I play for. I have always been that kind of individual. Outside noise does not bother me, and if I have to sacrifice and have a worse season and my team still wins, I’ll take that.

“Me and Ashu pa [Ashish Nehra] are similar in terms of wanting to play five proper bowlers, who can win you matches all day… Most of the time, I have seen in T20 cricket, it’s a batters’ game but bowlers win you games.”
Hardik Pandya

“[On batting at No. 4:] I’ve always fancied myself as a batter. Batting comes first to me, it’s always going to be close to my heart, so, obviously when we got the auction done, it was clear that I had to bat up the order to guide… I have been in this kind of situation before, so for my team, I thought that it’s the best position [No. 4] for me to bat, so that all the other batsmen can come and express themselves.
“[On team combination:] Me and Ashu pa [Nehra] are similar in terms of wanting to play five proper bowlers, who can win you matches all day. Batters can obviously chip in and make sure that whatever or whenever we require batsmen can raise their hand and say ‘we are there’. But, most of the time, I have seen in T20 cricket, it’s a batters’ game but bowlers win you games.
“[Titans behind the scenes:] A lot of the time, we won the game, but we always spoke about what are the things we missed out on and how we can do better. A lot of the credit goes to all the support staff, from Ashish to [spin-bowling coach and scout] Ashish Kapoor, Gary, the physios to the masseurs, the logistics team; everyone chipped in, they were there to make sure all the players were comfortable, feel at home.
“[On how this win is different from his previous title wins with Mumbai Indians:] Obviously, I count myself lucky. I’ve been in five finals and won five times. It’s been exciting. This is going to be a special one because we spoke about creating legacy and making sure – this is for the generation to come, everyone will remember that this was the team who started this journey and… first year [for us in the IPL] to win the championship is very special.”

“People said we were batters short, short on experience. The franchise showed faith in David, me and Hardik. Now we’ve won, so nothing left to say.”
Rahul Tewatia

Rashid Khan (19 wickets at 22.15): “It’s the biggest achievement of your career as a player, being part of a winning IPL team. It’s one of the most big achievements for me in my cricket career.
“[On the final:] We adjusted ourselves very quickly with the wicket. We knew it was the kind of wicket [where] if they scored 150-plus it would be hard, but we have to bowl in the right area and that’s what happened. Everyone took the responsibility, the middle overs was really important and we bowled really well.”
Rahul Tewatia (217 runs at 31.00): “We were relaxed in Qualifier 1 and we depended on staying relaxed and taking the game deep and finishing it off.
“[On his feelings in the moment:] Don’t know about the party, but when the season started, someone asked me ‘what are your goals for IPL 2022’ and I said my only goal was to win a trophy with my new team. Don’t know about party, but I definitely won’t sleep tonight.
“[On the team:] People said we were batters short, short on experience. The franchise showed faith in David, me and Hardik. Now we’ve won, so nothing left to say.”

“I think winning an IPL is as big as winning a World Cup and this is my fifth year and I’m fortunate enough to win it this time.”
Shubman Gill

Wriddhiman Saha (317 runs at 31.70): “This season, some people said we didn’t make a good team, so we have proved everyone wrong. Feels good to win. Mohammed Shami got a wicket off the first ball of the season for us. We got momentum from there. So he has been outstanding through the season. Everyone has performed.”
Shubman Gill (483 runs at 34.50): “It means a lot, you know, after winning the Under-19 World Cup [in 2018]. I think winning an IPL is as big as winning a World Cup and this is my fifth year and I’m fortunate enough to win it this time. I wanted to be there [batting] till the end this time and that was the talk with coaches and we came over the line.”
Matthew Wade (157 runs at 15.70): “We’ve had a relaxed environment. Haven’t relied on one person too much even though Davey [Miller], Rashid and Hardik have had terrific seasons. It’s been a real family atmosphere, Ashish has created that. Everyone gets plenty of training time, he takes care of that. Everyone feels welcome and you can see the performances.”
Tags: Gujarat Titans, India, Indian Premier League, Royals vs Titans