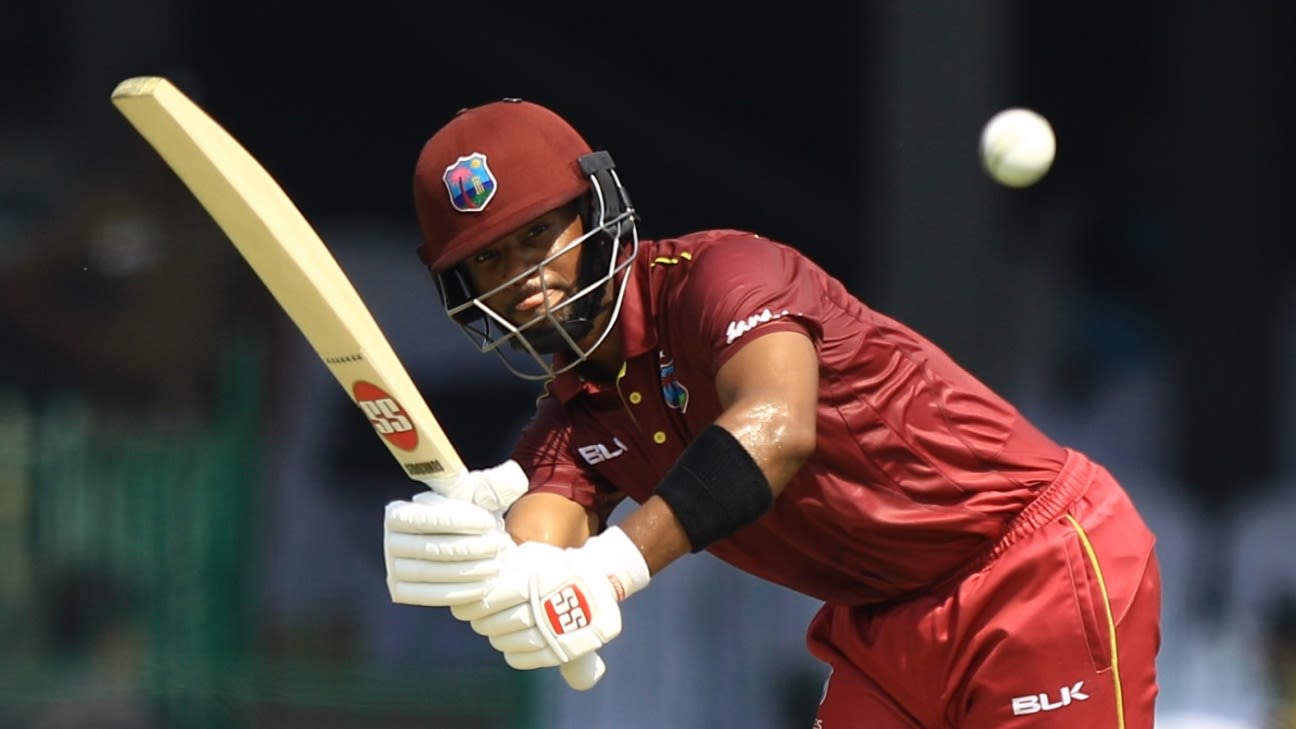 West Indies 249 for 3 (Hope 119, Brooks 60, King 59*) beat Netherlands 240 for 7 (Nidamanuru 58, Vikramjit 47, Hosein 2-29, Mayers 2-50) by seven wickets
Shai Hope’s 11th ODI century studded West Indies’ domination in the first of three ODIs against Netherlands in Amstelveen. On a blustery Tuesday with sheets of rain that reduced the game to 45 overs per side, West Indies made light work of a 247 chase, as they got home with 11 balls to spare and seven wickets in hand. There were also bruising half-centuries from Shamarh Brooks and Brandon King to help West Indies along.
The tone of the chase was set early as Hope and Brooks added 120 for the first wicket. While their approach wasn’t explosive, they reeled off enough runsto always stay ahead of the asking rate.
Then there was a stutter when seam-bowling allrounder Logan van Beek picked up two wickets off successive deliveries. First, he sent back Brooks by taking an excellent return catch, and then had Nkrumah Bonner lbw with an inducker. When Nicholas Pooran, the captain, fell cheaply three overs later, Netherlands may have sniffed an outside chance of winning. But Hope and King extinguished any such hopes with an unbroken 116-run stand to seal the deal.
Despite the loss, it wasn’t all doom and gloom for Netherlands as they fought hard to construct an innings that centred on rookie opener Vikramjit Singh and the experienced Max O’Dowd. They added 63 in 12 overs to set a solid base. Then they had small contributions from every member of the top order, but without any substantial score. It wasn’t until Teja Nidamanuru, the 27-year-old allrounder, top-scored with 58 on debut that they managed to get to a respectable position.
Nidamanuru faced just 51 balls and struck three fours and two sixes in his knock. This helped Netherlands post 240 for 7, which was then readjusted to 246 through the DLS method. As the chase went on, it became increasingly evident that they were well short.
“I think we need to adapt a bit faster,” Hope said after the match. “Obviously, we have seen what they have got with both bat and ball. Hopefully, we can score a bit faster, just need to make sure we acclimatise ourselves to the conditions as quickly as we can and hopefully, get on early wickets to bowl and top them with the bat.”
Despite the win, West Indies stay tenth, and outside the direct qualifying zone in the ODI Super League that serves to identify seven direct qualifiers – plus the hosts – for next year’s 50-overs World Cup in India. Netherlands are last, with just two wins in 11 matches so far.
The second and third ODIs will take place on June 2 and June 4 respectively.
Tags: Brandon King, Netherlands, Netherlands vs West Indies, Shai Hope, Shamarh Brooks, Teja Nidamanuru, West Indies, West Indies in Netherlands