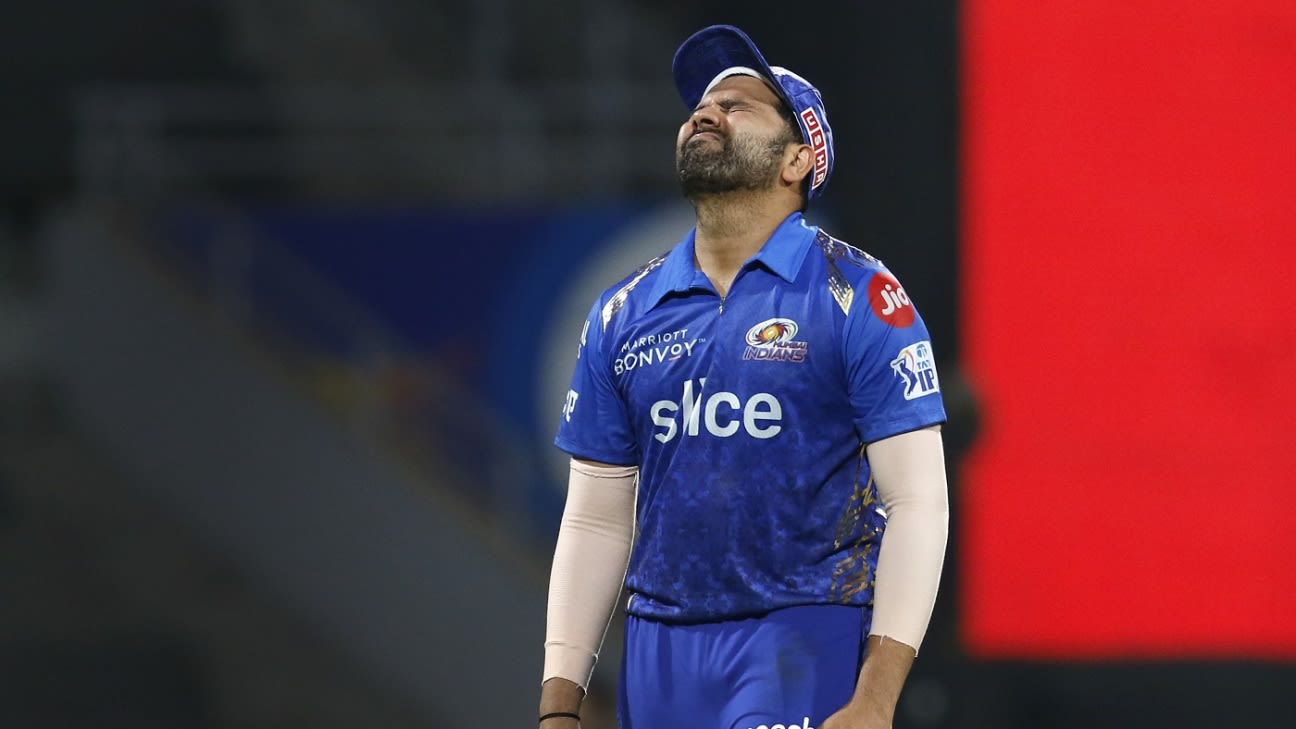 Mumbai Indians captain Rohit Sharma is “pretty disappointed” with his batting performance in IPL 2022 but he is confident of turning it around in the coming days. In 14 games, Rohit managed just 268 runs at an average of 19.14 and a strike rate of 120.17. It is also the first time that he failed to score a single half-century in an IPL season.
“A lot of things that I wanted to do didn’t happen,” he said after Mumbai’s last league game. “But this has happened with me earlier as well, so it’s not something I am going through for the first time.
“I know cricket doesn’t end here; there is a lot of cricket ahead. So I need to take care of the mental aspect and think about how I can return to form and perform. It’s only a minor adjustment and I will try to work on that whenever there is some time off.”
Rohit’s performance had an impact on the team’s fortunes as well. Mumbai suffered eight successive losses at the start of the season, and while they won four of their last six games, it wasn’t enough to avoid the wooden spoon.
“It was a bit disappointing season for us as we couldn’t execute our plans at the start of the tournament,” Rohit said. “And we know that in tournaments like the IPL, you have to build that momentum.
“Initially, when we kept losing games one after another, that was a difficult time. For us, what was important was to make sure that whatever we had planned, we came out and tried those things. It didn’t happen exactly the way we wanted to.
“But it happens sometimes when you have a new team as some players take some time to understand their roles. Certain guys were playing for the first time for this franchise. And they play different roles when they play for their country, for their state, or in different leagues. And when they come here, they get different roles. So it takes a little time to get adjusted.”
In the second half of the campaign, Rohit said, the whole team did well, in both batting and bowling departments, which was a big positive. “When you have to win matches or tournaments, you have to perform like that,” he said.
1:23

Ponting – ‘It’s been one of those up and down seasons’

Our bowling group outperformed our batting group – Capitals coach Ponting
Performing with both bat and ball was something Delhi Capitals failed to do, according to their head coach Ricky Ponting. Ponting was all praise for his bowlers but felt his batters let the team down, and as a result, they couldn’t make it to the playoffs.
“If I look at our entire season, it’s pretty fair to say that our bowling group have probably done a better job on a whole than our batting group,” he said. “Our batting group has been really inconsistent and probably haven’t scored the amount of runs that we should have scored.
“I’m not making excuses, but we’ve had quite an interrupted season with Covid, injuries and other illnesses that we’ve had through our camp. So it’s been one of those up-and-down and inconsistent seasons.
“We’ve all been delighted with Khaleel Ahmed, [Chetan] Sakariya in the games he played. Kuldeep Yadav has been one of the finds of the tournament. You always know what you’re going to get with Axar Patel. Shardul [Thakur] had some really good games at the back end of the tournament as well. So I think it’s fair to say that on a whole, our bowling group probably did outperform our batting group.
“But right through the tournament we just haven’t been able to put very good games of cricket together. In the first half, we played some good cricket without being very good. I pretty much demanded of the guys to find a way to turn that good into very good in the back half of the tournament and we were probably a little bit better in the back half. But you know we’ve come up a game short and that’s disappointing for everybody.”
Tags: Capitals vs Mumbai, Delhi Capitals, Indian Premier League, Mumbai Indians, Ricky Ponting, Rohit Sharma