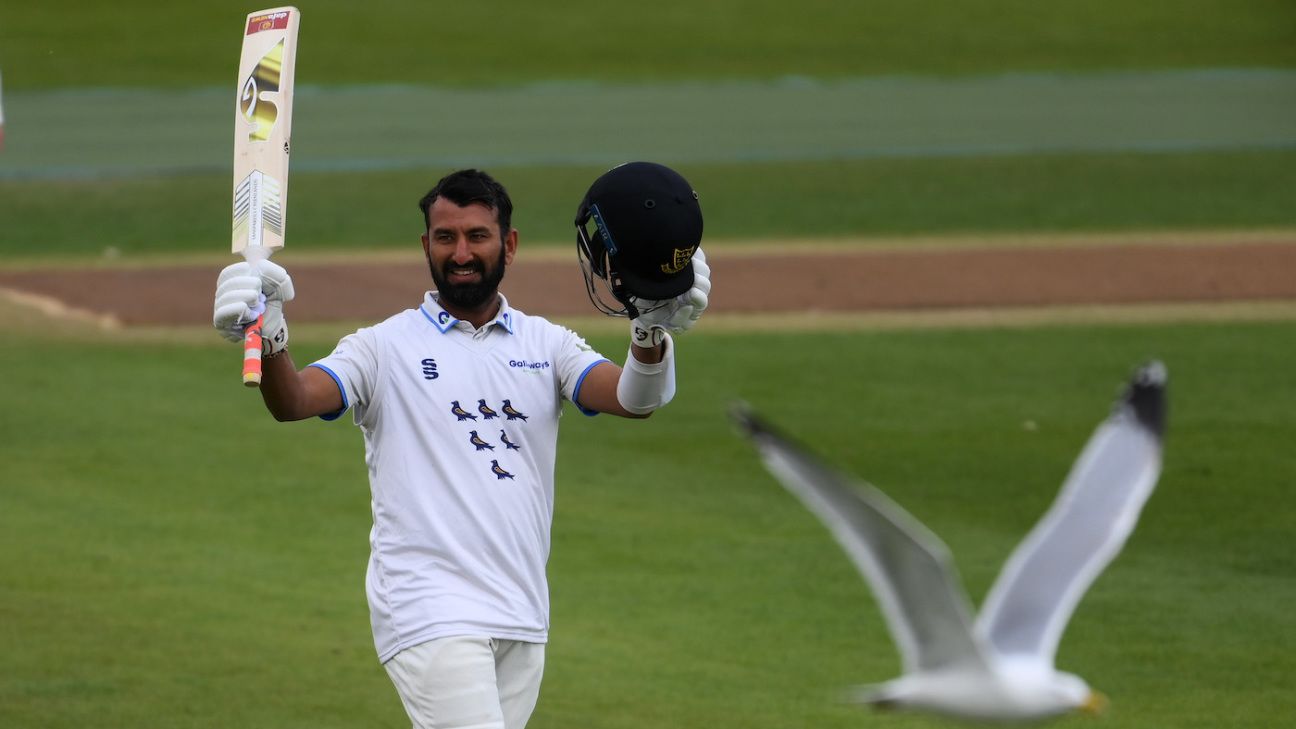 Cheteshwar Pujara, who had been recently dropped for the home Test series against Sri Lanka, has returned to the squad for the rescheduled fifth Test against England, which will be played in Edgbaston from July 1-5.
Ravindra Jadeja, whose IPL season ended abruptly with a rib injury, is also part of the 17-man touring party.
Rohit Sharma, Virat Kohli and Jasprit Bumrah, who were all rested for the home T20I series against South Africa next month, will be in Test action in Birmingham.
Related
However, Ajinkya Rahane will be out of action after sustaining a hamstring injury during his spell with Kolkata Knight Riders in the IPL. Along with Pujara, Rahane was also previously dropped for the two-match Test series against Sri Lanka.
From the squad that took on Sri Lanka in the Test series, openers Mayank Agarwal and Priyank Panchal were left out. Agarwal could instead turn out for his state Karnataka in the Ranji Trophy knockouts, which start from June 6 in Bengaluru.
ESPNcricinfo Ltd
Pujara has worked his way back into the side after piling up 720 runs in eight innings for Sussex – including four centuries – at a stunning average of 120. Only Durham’s Sean Dickson and Derbyshire’s Shan Masood have scored more runs than Pujara in the County Championship Division Two, with both batters having played an extra game.
Pujara’s 203 at Hove in April came against a Durham attack that included seamer Matthew Potts who was recently called up to England’s Test squad for their home series against New Zealand.
Pujara was also among the runs in the Ranji Trophy, scoring two half-centuries in five innings for Saurashtra.
Mohammed Siraj, Umesh Yadav, Shardul Thakur and Prasidh Krishna, who is uncapped in Test cricket, are part of the seam attack that will be led by Bumrah and Mohammed Shami. At 6′ 2″, Krishna was originally picked as a reserve bowler for the England Test series last year. He has since made rapid strides across formats.
Krishna was the highest wicket-taker for Karnataka in the league phase of the Ranji Trophy, collecting 15 wickets in two games at an excellent average of 11.60, and then impressed with his hit-the-deck bustle for Rajasthan Royals in the ongoing IPL.
Jadeja aside, R Ashwin was the only frontline spin option in the squad. Andhra’s KS Bharat was picked as the second wicketkeeper behind Rishabh Pant.
India’s Test specialists are likely to leave for England on June 15. The Birmingham Test was pushed back following a Covid-19 outbreak in the Indian camp last year. India, who currently lead the series 2-1, will look to seal their first Test series win in the country since 2007.
Head coach Rahul Dravid is set to join the tour party after the conclusion of India’s five-match T20I series against South Africa on June 19 in Bengaluru. There will be a clash of dates between India’s T20 warm-up games in England – against Northamptonshire and Derbyshire – and the Edgbaston Test, so there is a possibility of VVS Laxman filling in for Dravid during those T20s.
Tags: Cheteshwar Pujara, ICC World Test Championship, India, India tour of England, Mayank Agarwal, Prasidh Krishna, Ravindra Jadeja