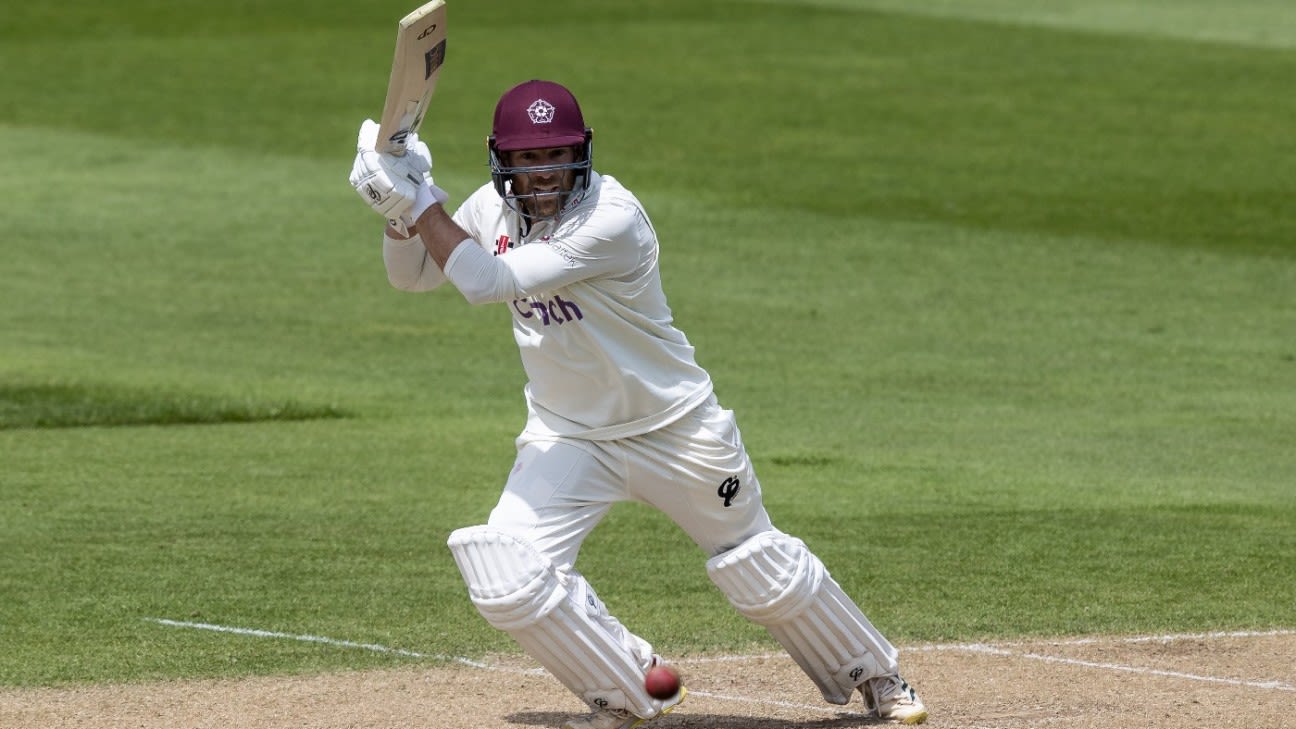 Northamptonshire 347 for 7 (Procter 76, Vasconcelos 71) trail Kent 519 for 9 declared by 172 runs
Northamptonshire are still fighting to save the follow-on despite seventies for skipper Ricardo Vasconcelos and Luke Procter on day three of this LV= Insurance County Championship match at Wantage Road.
Kent began the day hopeful of capitalising on a huge first innings 519 with the hosts on a precarious 21 for 2, but Northants rallied, losing only one wicket in each of the first two sessions.
The new ball brought two key scalps after tea with Matt Quinn’s pace accounting for Rob Keogh who had made an attacking 45 and put on 96 with Procter. Hopes of capitalising on those breakthroughs faded though when T20 skipper Josh Cobb hit some lusty blows and keeper Lewis McManus was dropped on one by Jas Singh.
Despite Cobb falling shortly before stumps, Northamptonshire are within 23 runs of saving the follow-on. It leaves Kent with a limited window tomorrow morning to press home their advantage and secure a first win of the season.
Northamptonshire negotiated an extended morning session for the loss of only nightwatchman Matt Kelly who was resolute in defence but aggressive in attack. He had extended his partnership with Vasconcelos to 61 when he was trapped in front by Quinn.
Related
Vasconcelos, who rediscovered his touch with 156 against Warwickshire last weekend after an indifferent start to the season, continued where he left off at Edgbaston. An expansive waft outside off stump on 26 was a rare early loss of concentration. Otherwise, he played a controlled innings, scoring all around the wicket, sweeping, driving and cutting fluently.
He began the afternoon session in confident mood, hitting two fours off each of the first two overs. It was against the run of play therefore when he turned one from Darren Stevens straight to square leg.
Procter had been initially content to let Vasconcelos take the lead but after the captain’s wicket he too started to find the boundary. George Linde had got the ball to turn and bounce causing some problems initially, but Procter though started to use his feet to the spinners. He came down the track to Linde to dispatch him nonchalantly through midwicket for four before hitting the same bowler down the ground for six more to move to his half-century.
Keogh was equally harsh on the slow bowlers, hitting Linde straight for four under the bowler’s outstretched hands and a six.
Kent took the new ball after tea and at first Keogh seemed to enjoy the extra pace on the ball, taking seven runs off two balls from Stevens. However, a quicker delivery from Quinn took him by surprise and kept low, before hitting top of middle and off.
Procter, who looked set to add to his two centuries so far this summer, then met his downfall in a moment of indecision when he failed to withdraw his bat after deciding against playing a cut shot to Grant Stewart and was caught behind.
Cobb started aggressively in white ball mode, smashing Quinn through extra cover for a boundary to open his account and then taking two more off the same bowler’s next over. He put on a quickfire stand of 52 with McManus to bring up the third batting point before playing one big stroke too many, caught off the leading edge when he took on Singh. Tom Taylor then joined McManus in an unbroken stand worth 30 to see out the day.
Tags: County Championship Division One, Kent, Kent vs Northants, Luke Procter, Northamptonshire, Ricardo Vasconcelos