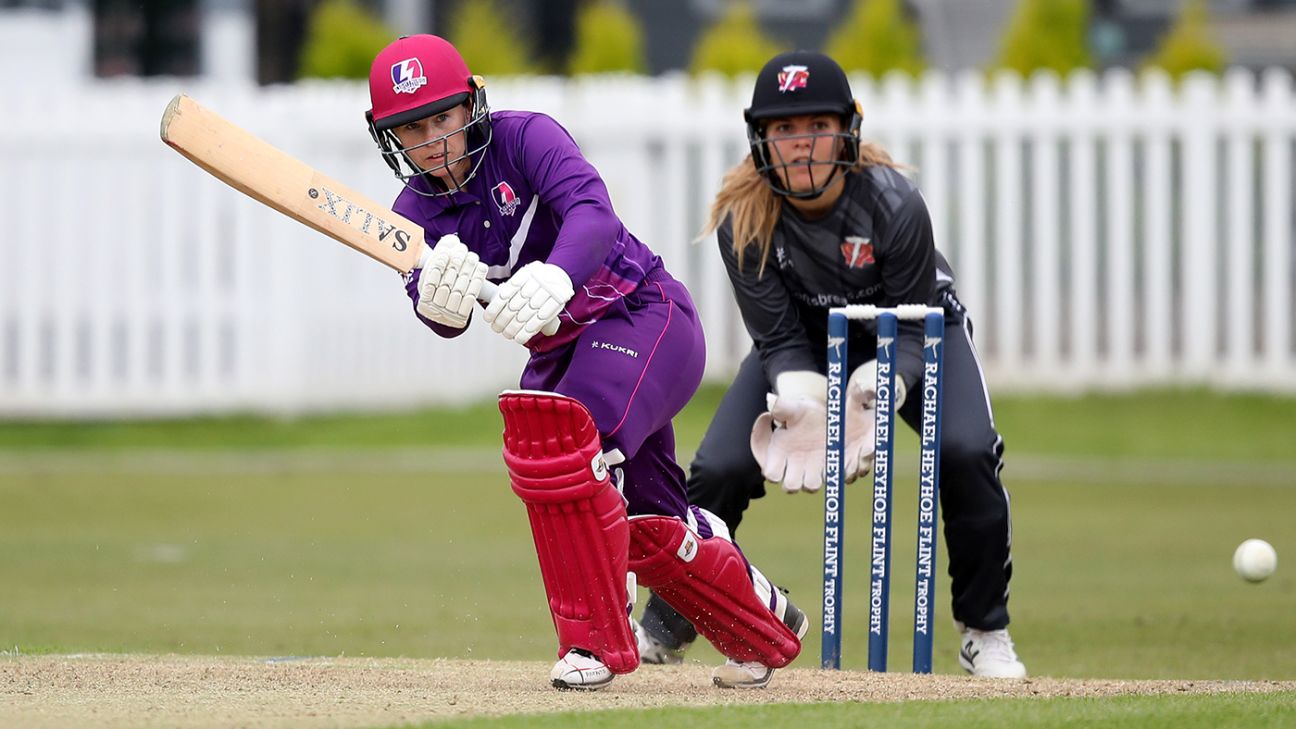 Lightning 155 for 5 (Beaumont 59) beat Thunder 152 for 5 (Boyce 71, Lamb 56, Cleary 3-34) by five wickets
Tammy Beaumont’s second half-century of the season and Piepa Cleary’s three-for underpinned Lightning’s first-ever Charlotte Edwards Cup victory.
England international Beaumont made 59 for the second time in three innings with a classy knock after Australian fast bowler Cleary had restricted Thunder to 152 despite Georgie Boyce and Emma Lamb’s 130-run opening stand.
Lightning had lost all six of their fixtures in the competition last year and had already gone down to Southern Vipers and Diamonds this term, but secured a five-wicket victory at the eighth time of asking. Thunder were without Kate Cross and Sophie Ecclestone, both of whom are in India for the Women’s T20 Challenge.
Lamb and Boyce had put on 95 in the victory over Diamonds on Wednesday and were at it again through low-risk accumulation having chosen to bat first.
A rapid outfield paired with a short-sided boundary saw the Milligan Road side of the Uptonsteel County Ground peppered as 40 runs came off the powerplay.
Related
The duo kept pace with each other, scoring their half-centuries within three minutes of each other with the same exact stats: 44 balls and five boundaries each. They both got lucky, and Cleary unlucky, as catches were shelled at mid-off and deep midwicket.
Just as a score north of 160 looked probable, Lightning fought back to stifle the visitors with four wickets coming in 10 balls. Lamb scooped to cover and Boyce was well-caught at long-on for 56 and 71 respectively to end the second-highest stand in Charlotte Edwards Cup history.
Cleary’s luck returned to have Ellie Threlkeld caught behind and Danielle Collins stumped with back-to-back balls before Shachi Pai was run out in the final over.
The ever-effervescent Alex Hartley made the early breakthrough of Marie Kelly, lbw while sweeping, but Ella Claridge and Beaumont copied much of what Boyce and Lamb had done earlier.
Beaumont needs no introductions, with intelligent manoeuvrability mixed with power, while Claridge showed off brutal power to hit four boundaries in the ‘V’.
She was undone by Phoebe Graham’s slower ball to end a 61-run stand with her experienced partner, who moved to a 34-ball fifty with a glorious cover drive.
Beaumont, who had been dropped on 20, dragged a cross-bat shot to mid-on and Sarah Bryce was stumped. Kathryn Bryce took her side to the brink of victory with 29 before Bethan Ellis’ back-to-back boundaries took them to the win with seven balls to spare.
Tags: Charlotte Edwards Cup, Emma Lamb, Georgie Boyce, Lightning, Piepa Cleary, Tammy Beaumont, Thunder, Thunder vs Lightning