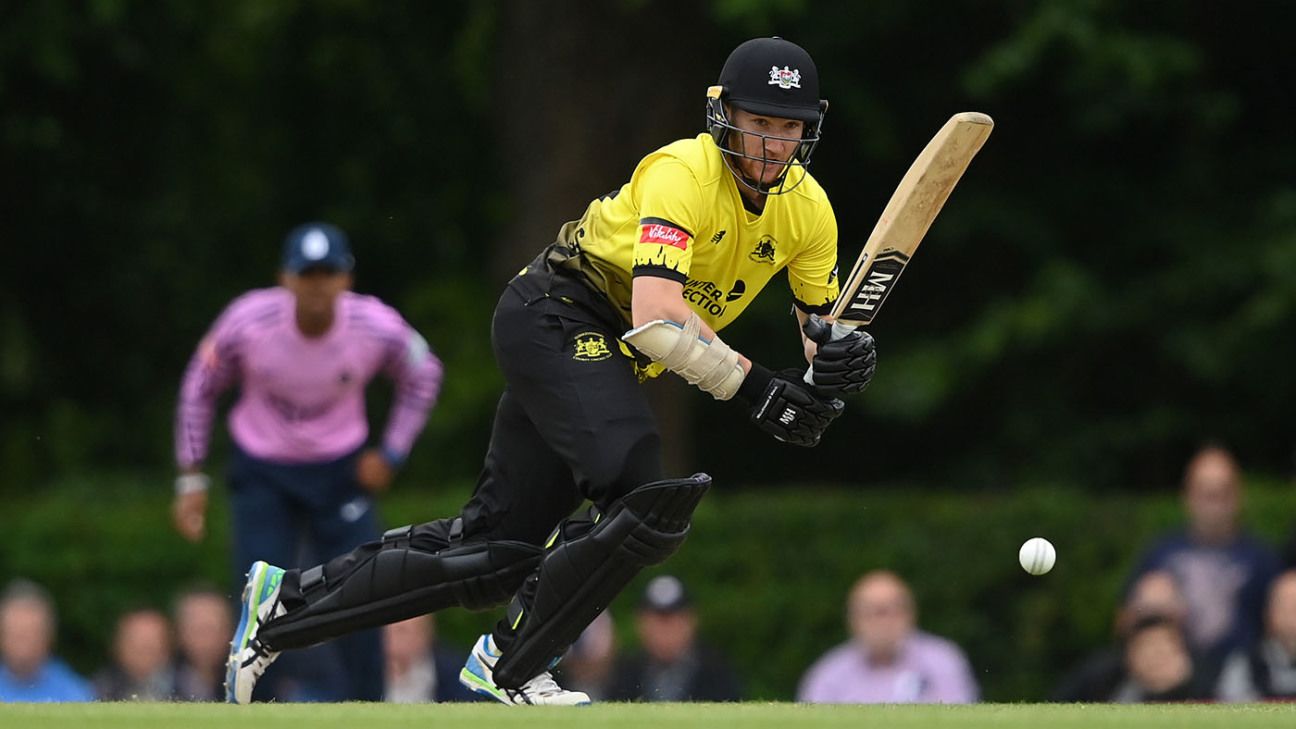 Gloucestershire 193 for 7 (Bracey 70, Finn 2-15) beat Sussex 152 for 8 (Rizwan 58, Payne 3-22) by 41 runs
James Bracey registered a career-best score as Gloucestershire beat Sussex by 41 runs beneath the Seat Unique Stadium floodlights to give their Vitality Blast campaign lift-off in Bristol.
Without a win in any of their previous seven matches in all formats this season, Gloucestershire were indebted to Bracey, who raised 70 from 45 balls to help the home side reach 193 for 7 after being put in.
Steve Finn was outstanding with the ball for Sharks, returning figures of 2 for 15 from four overs, but Ryan Higgins made 39 not out from 22 balls and Glenn Phillips contributed a useful 27 as Gloucestershire found acceleration following a sluggish start to their innings.
Mohammad Rizwan top-scored for Sussex with 58, while Luke Wright and Josh Philippe contributed 25 and 35 respectively to keep their side in the hunt. But the chase was derailed after Rizwan fell in the 16th over, seven wickets then tumbling for the addition of 24 runs in 4.4 overs as the visitors lost their way.
David Payne took 3 for 22 from four overs to put the skids under Sussex, with Paul van Meekeren and Naseem Shah weighing in with a brace of wickets apiece as Gloucestershire ultimately won with something to spare.
England Test hopeful Bracey defied any attempt to typecast him as pre-eminently a red-ball cricketer, eclipsing the 64 he made in a winning cause against Hampshire on this ground three years earlier, his highest previous T20 score. Charged with the task of repairing the damage following the early demise of Miles Hammond and Ian Cockbain, the Bristolian adopted the anchor role to perfection, staging a restorative stand of 74 with overseas hired hand Phillips for the third wicket as Gloucestershire recovered from 21 for 2.
If the hosts failed to live up to expectations during a powerplay that yielded just 39 runs, they made up for lost time as Bracey went to 50 from 34 balls and New Zealand international Phillips, following a tentative start, helped himself to a brace of fours and sixes in a forthright knock of 27 from 22 deliveries.
Phillips fell to wily Sharks captain Ravi Bopara, held by Finn at long-on in the 12th over, after which Bracey went on the attack, staging a whirlwind alliance of 32 in 17 balls with Higgins for the fourth wicket. Bracey had garnered nine fours and a six when he departed in the 15th over, carting Delray Rawlins to long-on with the score on 127.
That Gloucestershire were able to add a further 66 runs from the final five overs was due, in large part, to Higgins, who combined clever improvisation with brutish power to plunder a quartet of sixes and stage a stand of 32 for the fifth wicket in 2.5 overs with Jack Taylor, who matched him blow for blow before hoisting the returning Finn to deep mid-wicket and departing for 21. Of the 10 balls he faced, Gloucestershire’s captain dispatched three of them for six.
Benny Howell provided late impetus, smashing a Henry Crocombe no ball for six and then smiting the resultant free hit over long-off in the penultimate over. Higgins ensured a final flourish, raising a further two maximums at the expense of George Garton, who was unable to keep a lid on things in the last over.
Former England paceman Finn was by far the most effective of the Sharks’ bowlers, sending down three parsimonious overs with the new ball and then returning at the death to remove the dangerous Taylor.
Wright and Rizwan afforded the Sussex reply solid foundations in an opening stand of 52 in 5.5 overs as the visitors looked to atone for the seven-wicket defeat meted out by Glamorgan in Hove just 24 hours earlier. Gloucestershire’s bowlers held their nerve and David Payne effected a breakthrough when bowling Wright for 25 shortly before the end of the powerplay.
Thereafter, Rizwan found a willing ally in Philippe, the second-wicket pair finding the gaps and running hard to advance the score to 88 for 1 at the halfway point. If Rizwan was prepared to force the issue, Philippe proved a perfect foil, working the ball both sides of the wicket and demonstrating a variety of shots to keep the scoreboard moving.
After posting 81 not out against Glamorgan, Rizwan moved effortlessly to 50 from 34 balls as the duo went from strength to strength, Gloucestershire deploying seven different bowlers in a fruitless attempt to prise them apart.
Yet Gloucestershire were able to exert pressure, tight overs in the middle of the innings from Naseem Shah and Howell precluding the departure of Rizwan, caught at the wicket cutting van Meekeren. Although Sharks’ overseas stars had added 76 in 9.2 overs, they still required a further 66 from 4.9 overs, and the odds probably favoured Gloucestershire for the first time when Philippe hit Payne to Higgins on the deep square leg boundary in the 17th over.
Sussex’s task was now a stiff one and Gloucestershire’s bowlers did the rest with five batsmen coming and going without achieving double figures.
Tags: Gloucestershire, Gloucs vs Sussex, James Bracey, Mohammad Rizwan, Ryan Higgins, Steven Finn, Sussex, Vitality Blast