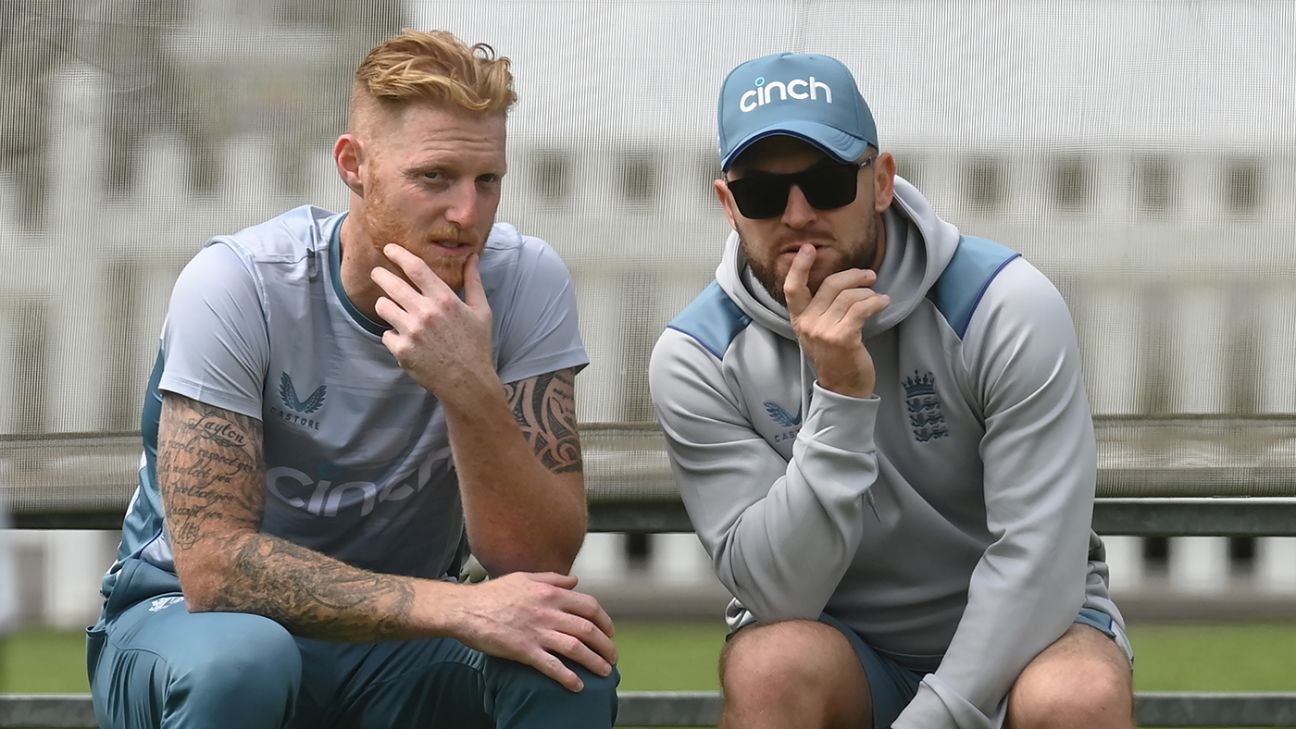 The champions are back. One year ago to the day, New Zealand arrived at Lord’s for the first of three seismic Tests: the first two – a draw in London followed by a convincing win in Edgbaston – gave them only their third-ever series win in England and their first since 1999; the third was their crowning moment, beating India at the Ageas Bowl to become the inaugural World Test Champions.
For England, that Lord’s Test represented a sliding-doors moment, the first step on the Joe Root-Chris Silverwood era’s gradual, then sudden descent towards self-destruction. With fans back in the stands for the first time since the pandemic, England declined the opportunity to chase 273 in 75 overs, instead grinding their way to 170 for 3; Root defended the move but lost the goodwill of his team’s supporters and never won it back.
When selecting the squad for the series – which saw several multi-format players rested after their IPL excursions – Silverwood had created a rod which was used to beat him for the next seven months. “Playing the top two teams in the world […] is perfect preparation for us as we continue to improve and progress towards an Ashes series,” he said, fatefully; one win in six home Tests and a 4-0 drubbing in Australia sealed his fate.
Related
And so 12 months on, England have a new look about them; a snarling, bearded, tattooed one with a distinctly Kiwi flavour, personified by the new captain-coach combination of Ben Stokes and Brendon McCullum. The pair have spoken at length about positivity, mindsets and brands of cricket since their respective appointments but this week will be the first chance for their side to walk the walk.
Unsurprisingly, there have been changes in personnel. Only five members of the side that played the equivalent Test last year are retained in the playing XI which England named on Wednesday and even the survivors have a sense of freshness: Root has been released from the burden of captaincy, Zak Crawley and Ollie Pope have been shuffled into new positions and James Anderson and Stuart Broad are recalled after they were jettisoned in the Caribbean.
One of their most pressing tasks is to win back their fan base, a challenge highlighted by the public’s reluctance to shell out extortionate sums for tickets at Lord’s. Of course, there is a fine line between attacking, attractive cricket and recklessness, but McCullum’s track record as a captain suggests he will strike the balance.
New Zealand, meanwhile, are entering a new era of their own, with this series representing a benchmark for their succession planning. “We’re quite a different team to even a year ago at the World Test Championship,” Gary Stead, their understated coach, said on Monday while pointing to the retirements of Ross Taylor and BJ Watling. “Those changes are felt within the team but that’s an opportunity for someone else to come up and play the game.”
The transition has not been seamless so far: New Zealand have played three two-match series since the WTC final and won none of them, losing 1-0 in India before back-to-back 1-1 draws at home to Bangladesh and South Africa. On the back of a warm-up defeat to a County Select XI at Chelmsford last week, there is just a hint of vulnerability.
It is their batting line-up which will come under particular scrutiny. Will Young is yet to nail down his spot at the top of the order while the engine room of Kane Williamson, Devon Conway and Daryl Mitchell have had limited preparation time after their involvement in the IPL. Even still, they will prove tough first opponents for England’s new regime, especially given their main strength – fast bowling – remains unaffected.

Only seven weeks ago, Joe Root was still England’s Test captain and for a fleeting moment it seemed as though he was determined to cling onto that position despite a run of one win in 17. Instead, he handed the reins to Stokes and has kept a low profile since, warming up for this series with six appearances – three in the Championship, three in the T20 Blast – for Yorkshire. Most ex-captains return to the ranks in the twilight of their career and with a limited shelf-life but at 31 and in the form of his life, Root could press on for many years to come.
Kane Williamson‘s persistent elbow injury means he has played a solitary Test since the WTC final and missed New Zealand’s entire home summer. When he has played, he has struggled for form: at the IPL, he finished the season with a glacial strike rate of 93.50 after Sunrisers Hyderabad opted to retain him on a INR 14 crore (USD 1.86 million approx) contract. Following a purple patch, the last 12 months have served a reminder of Williamson’s mortality.

England named their playing XI on Wednesday, with Matthew Potts due to make his Test debut after he was preferred to Craig Overton as the third seamer. The reshuffle in the batting line-up sees Pope promoted to No. 3, a position he has never batted in first-class cricket, while Root, Jonny Bairstow and Stokes form the middle-order engine room. Jack Leach plays his first home Test since 2019.
England: 1 Alex Lees, 2 Zak Crawley, 3 Ollie Pope, 4 Joe Root, 5 Jonny Bairstow, 6 Ben Stokes (capt), 7 Ben Foakes (wk), 8 Matthew Potts, 9 Jack Leach, 10 Stuart Broad, 11 James Anderson.
Trent Boult, who arrived late from the IPL, was under consideration before New Zealand trained on Wednesday but appears to be a major doubt. Henry Nicholls, whose rehabiliation from a calf injury was delayed by a positive Covid test, has been ruled out and Williamson confirmed Daryl Mitchell will bat at No. 5 in his place. The main selection call is whether Ajaz Patel – who has not played a Test since taking 10 wickets in an innings against India in Mumbai – should be included, with Stead hinting that he might earlier this week. If he plays, one of Kyle Jamieson, Neil Wagner or Matt Henry will miss out.
New Zealand (possible): 1 Tom Latham, 2 Will Young, 3 Kane Williamson (capt), 4 Devon Conway, 5 Daryl Mitchell, 6 Tom Blundell (wk), 7 Colin de Grandhomme, 8 Kyle Jamieson, 9 Tim Southee, 10 Neil Wagner, 11 Matt Henry/Ajaz Patel.
Stuart Broad and James Anderson pose in the Long Room•Gareth Copley/Getty Images

After an unseasonably dry spring, the rain has returned in London this week and may cause some delays over the weekend, though the first two days are expected to be clear. Pitches at Lord’s have been significantly better for batters this season with an average of 34.24 runs per wicket in the Championship, compared to 20.76 on the green seamers of 2021. There was still some live grass on the surface 24 hours before the toss, but cut much shorter than New Zealand are used to from their home pitches. Supporters have been encouraged to wear red, white and blue to mark the Queen’s Platinum Jubillee but some empty seats are expected after slow ticket sales.

“There’s been talk around the word reset, which is something that I don’t particularly like. I just see this as a complete and utter blank canvas for this Test team going forward.”
Ben Stokes hopes his England side can paint a positive picture this week.
“I’ve seen him a couple of times around the hotel and it is strange to see him in it, but good on him. He’s done exceptionally well in his transition from cricket and to get a job like this shows you the type of person he is, and the coach he is as well.”
Tim Southee is still adjusting to seeing Brendon McCullum in England training kit.
Tags: Ben Stokes, Brendon McCullum, England, England vs New Zealand, ICC World Test Championship, Joe Root, Kane Williamson, Matthew Potts, New Zealand, New Zealand in England