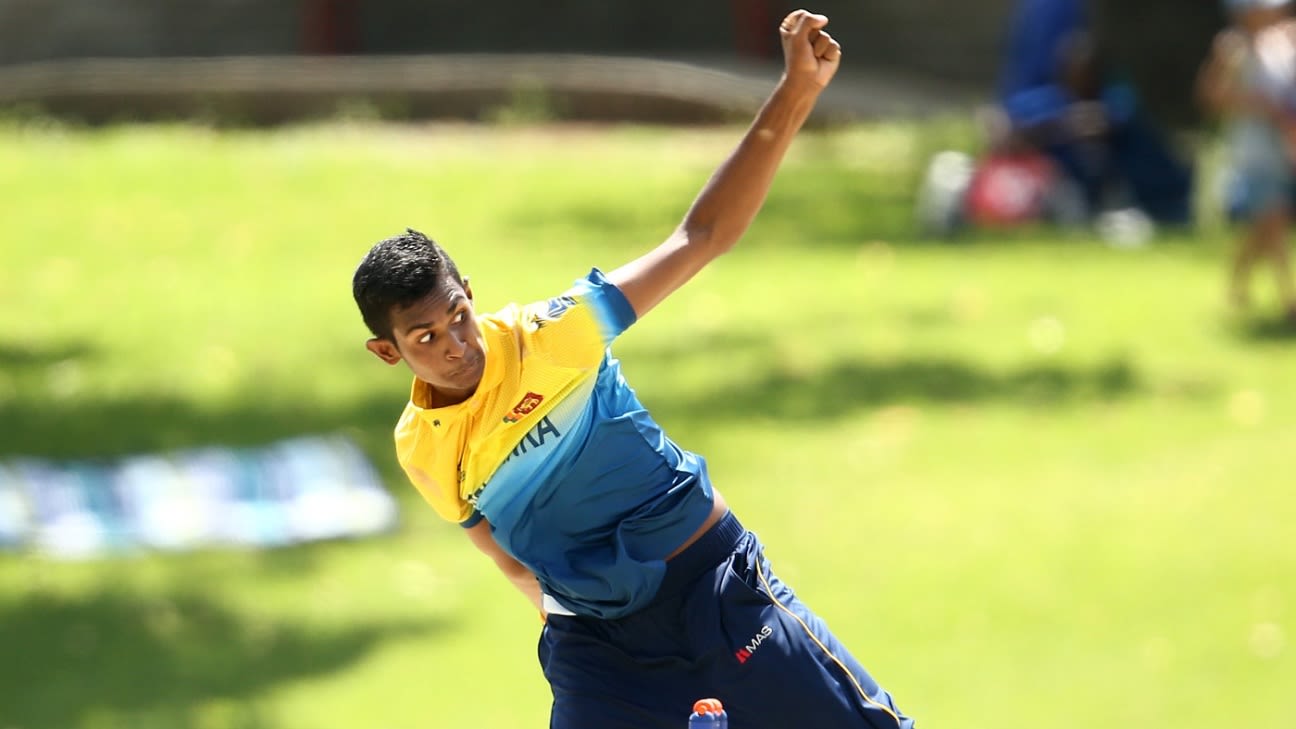 Top-order batter Nuwanidu Fernando, and right-arm seamer Matheesha Pathirana have broken into Sri Lanka’s T20I squad, for the forthcoming series against Australia. Both have come into the side having impressed overseas – Nuwanidu (22) in England, and Pathirana (19) in the IPL.
However, there are no places for allrounder Dhananajaya de Silva, fast bowler Lahiru Kumara, or wicketkeeper batters Dinesh Chandimal and Niroshand Dickwella. Kusal Mendis is likely to take the gloves.
Making a return to the T20 squad, also, are seamer Kasun Rajitha and left-arm wristspinner Lakshan Sandakan. Legspinner Jeffrey Vandersay has, like Dickwella, been relegated to the standby players list. Avishka Fernando and Kusal Perera remain unavailable through injury. Neither have played a competitive match for months.
ESPNcricinfo Ltd
Nuwanidu comes in on the back of his 126 not out off 67 balls, which he made for Sri Lanka’s Development XI, against Gloucestershire. The younger brother of Test seam bowler Vishwa, Nuwanidu has largely been picked on potential, having made only two other half-centuries in 20 T20 innings.
So too Pathirana, who bowls with a Lasith Malinga-esque, slingy action, and had impressed in two outings for Chennai Super Kings, claiming 2 for 24 in one match, and 0 for 28 (in 3.4 overs) in the other. Pathirana had come in for particular praise by MS Dhoni, who had called him an “excellent death bowler” who had a big margin for error because he is difficult to hit in the air.
Related
Pathirana is actually one of two round-arm bowlers in this Sri Lanka squad. Nuwan Thushara, who played two T20Is earlier in the year, is also in the squad. They are joined on the pace front by Dushmantha Chameera, Chamika Karunaratne, Lahiru Madushanka, and Rajitha, who recently made a successful return from injury in the Test format.
On the spin front, Sri Lanka are led by Wanindu Hasaranga and Maheesh Theekshana, who both had successful stints at the IPL. Hasaranga had a particularly excellent season, picking up 26 wickets at an economy rate of 7.54. He was one wicket off claiming the purple cap. Ramesh Mendis, Praveen Jayawickrama, and Sandakan are the other options.
The batting is fairly straightforward. Chandimal and de Silva were omitted on account of their modest strike rates in this format. Danushka Gunathilaka, Kusal Mendis, Charith Asalanka, Bhanuka Rajapaksa, and Nuwanidu Fernando are all in the running for top order spots, while Dasun Shanaka, Madushanka, and Karunaratne are the middle order options.
The three-match series begins on June 7, at Khettarama (Colombo).
Standby: Jeffrey Vandersay, Niroshan Dickwella
Tags: Australia in Sri Lanka, Kasun Rajitha, Lakshan Sandakan, Matheesha Pathirana, Nuwanidu Fernando, Sri Lanka