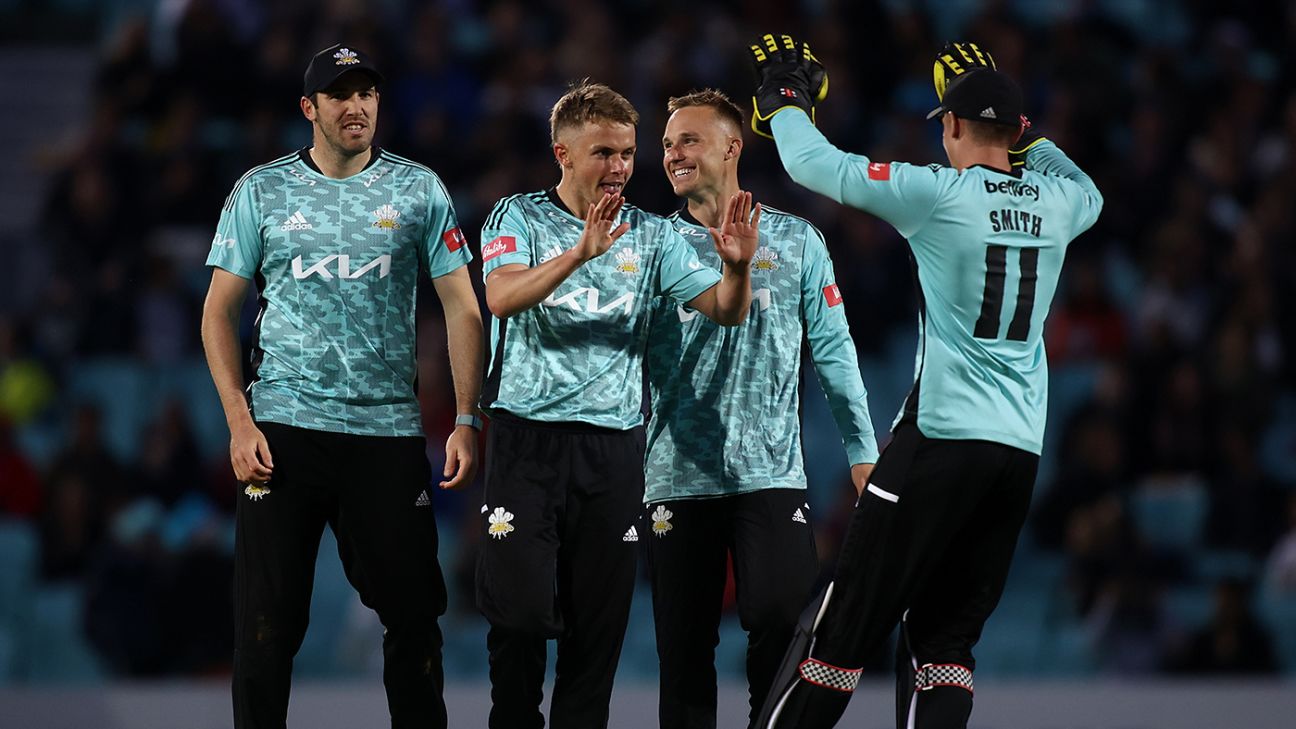 Surrey 129 (Jacks 51, Smith 3-13, van Meekeren 3-32) beat Gloucestershire 92 (Higgins 37, Curran 4-14) by 37 runs
England have gone left-arm crazy in white-ball cricket, picking as many as five left-arm seamers in their 14-man squad for a three-match ODI series in the Netherlands next week. Two of them, Sam Curran and Reece Topley, combined to devastating effect at the Kia Oval on Tuesday night, ripping out Gloucestershire’s top order as Surrey comfortably defended 129 in a game shortened to 16-overs-a-side by rain.
Gloucestershire were 14 for 3 after four overs of their chase, split equally between Topley and Curran. They were hugely over-reliant on Glenn Phillips, the New Zealand middle-order batter, in the Blast last season and when he popped a return catch to Curran after failing to pick an offcutter, they never stood much chance on a cold, damp evening in south London.
They managed one boundary, an inside-edged four to fine leg off the final ball, in their 4.5-over powerplay and with Sunil Narine to come against an exposed middle order, Gloucestershire were on the ropes. Ryan Higgins, who made 37, was the main source of resistance before Curran returned to have David Payne caught in the deep, then yorked Higgins as he attempted a reverse-paddle; Topley finished the job, the wicket of Naseem Shah leaving him with 2 for 6 from his three overs.
Gloucestershire’s slow start stood in stark contrast to the one Surrey had made. Jason Roy and Will Jacks raced out of the blocks in a stand of 60 in 27 balls for the first wicket, before a dramatic collapse saw them bowled out with one of their 16 overs to spare.
Jacks, the sixth man out for 51 thanks to a searing Naseem yorker, was the only batter to temper his attacking style against Gloucestershire’s change-up bowlers in the middle overs; Kieron Pollard, making his first Blast appearance since 2011, holed out for 14 off 15 balls while Curran’s own 6 off 2 underlined the frenetic nature of the night.
Related
Curran has been gradually eased back to fitness after suffering a lower-back stress fracture at the IPL in October, an injury which ruled him out of England’s extensive winter programme. He was frustrated that the ECB did not allow him to enter this year’s auction but conceded that it would be unwise to push himself and risk a recurrence, and had bowled only 24.5 overs across formats this season before Tuesday night’s game.
But he has gradually ramped up his workload to the extent that England were happy to pick him in their squad for the Amsterdam trip, where he could theoretically bowl 30 overs in six days. He did not concede a boundary in his opening burst, hitting a hard length and nipping the new white ball about; he was rewarded with the wickets of Phillips and James Bracey, chipping to mid-off.
Topley, meanwhile, had his own frustrations around the IPL. He was approached by a franchise about the possibility of a replacement deal in mid-March but according to ECB regulations, he was unable to take up the offer, with county-contracted players only permitted to sign IPL contracts before the end of February.
Topley was unimpressed and pleaded double standards – players with central contracts are allowed to sign at any stage – but has instead had to plug away in the Championship, taking nine early-season wickets to help Surrey to the top of the table. T20 nights are when Topley thrives: his first two overs cost only two runs and included the dismissal of Miles Hammond, stumps rearranged while swinging to leg.

“We bowled really well according to the pitch,” Jacks said. “We used our skills and bowled brilliantly up top. Sammy and Toppers were brilliant. There was a bit of zip and they’re bowling with good pace and on the length that suited the wicket – any time you got too full, it was easier to hit.”
Surrey’s T20 side this season has a Harlem Globetrotters feel, with enough quality and depth to leave out Gus Atkinson, Rory Burns, Jordan Clark and Dan Moriarty, even with Ollie Pope and Ben Foakes away on England duty. In Pollard and Narine, they have two undisputed greats of the format, and should have few issues coping when Curran, Topley and Roy leave for the Netherlands tour.
Narine was characteristically frugal, conceding 17 runs and a single boundary – a reverse-swept four by Tom Smith – in his four-over spell. He turned the ball sharply in both directions, none more so than an offbreak which cut Benny Howell in half from a length and crashed into the top of his leg stump.
Howell and Smith had been the protagonists of Gloucestershire’s fightback with the ball, Smith benefitting from Surrey’s all-guns-blazing approach to pick up the first three wickets, those of Roy, Curran and Laurie Evans. Howell, like Narine, was the one bowler entrusted with a full four-over spell by his captain; like Narine, he took one wicket and conceded a solitary boundary.
Gloucestershire’s own England left-arm seamer, Payne, had a more expensive night than his Surrey counterparts, returning 2 for 30 from his three overs thanks to two cheap tail-end dismissals. Twice an unused member of an England white-ball squad, Payne is likely to make a long-awaited debut next month but with Topley and Curran ahead of him, he may have to wait his turn.
Tags: England, Reece Topley, Sam Curran, Sunil Narine, Surrey, Surrey vs Gloucs, Vitality Blast, Will Jacks