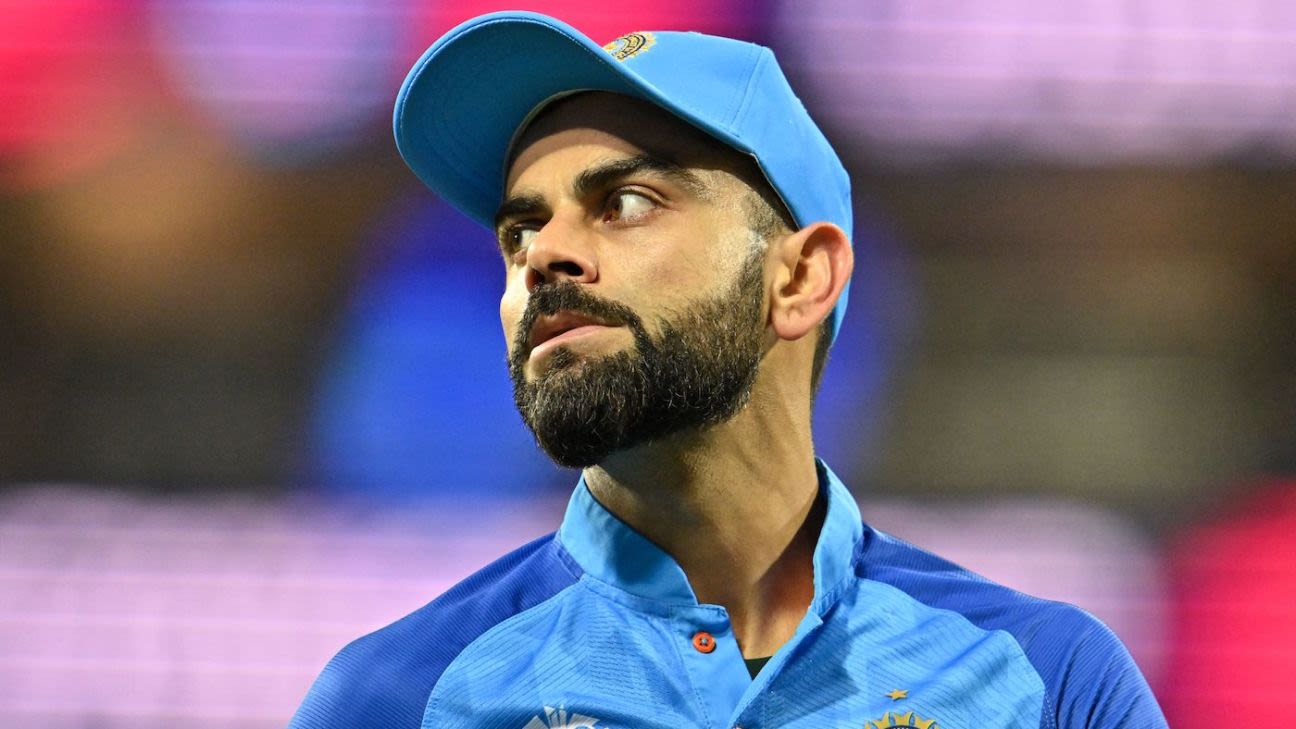 Virat Kohli has revealed a breach of privacy at his hotel room in Perth, from when India were stationed in the city for their preparatory camp and matches ahead of the T20 World Cup. Though Kohli did not say when the incident in question took place, ESPNcricinfo has learned it was on October 8, two days after the team had arrived in Australia.
Kohli made details of the breach public via a video on his Instagram page only on October 31, after India had finished their Perth leg of the tournament with the game against South Africa on Sunday. The video, which had been originally uploaded on TikTok by an unidentified user, gave viewers a walkthrough of the room and was captioned “King Kohli’s hotel room”.
“I understand that fans get very happy and excited seeing their favourite players and get excited to meet them and I’ve always appreciated that,” Kohli wrote in his post on Instagram. “But this video here is appalling and it’s made me feel very paranoid about my privacy. If I cannot have privacy in my own hotel room, then where can I really expect any personal space at all?? I’m NOT okay with this kind of fanaticism and absolute invasion of privacy. Please respect people’s privacy and not treat them as a commodity for entertainment.”
The hotel, Crown Towers, has since apologised* for the incident and said “the individuals involved have been stood down and removed from the Crown account”.

“We unreservedly apologise to the guest involved and will continue to take the necessary steps to ensure this remains an isolated incident,” the hotel management said in a statement. “Crown has taken immediate steps to rectify the issue. The individuals involved have been stood down and removed from the Crown account, and the original video was swiftly removed from the social media platform.
“Crown is conducting an investigation with the third-party contractor and will take any further steps necessary to ensure an incident of this nature does not happen again. We are also cooperating with the Indian Cricket team and the International Cricket Council to convey our apologies and will continue to work with them as we progress the investigation.”
The ICC said it was “incredibly disappointed by the gross invasion of privacy” that Kohli had suffered. “We continue to work with event hotels and security providers to ensure that this remains an isolated incident and player privacy is fully respected at all times.”
Among the first people to respond to Kohli’s post was David Warner, who responded, tagging the hotel, “This is ridiculous, totally unacceptable.”
ESPNcricinfo understands the Indian team hadn’t raised the issue with the ICC or Cricket Australia, but they did bring it up with the hotel. At the time of writing, India were on their way to Adelaide, where they will play Bangladesh on Wednesday.
Ironically, Kohli has said in the past that he finds more privacy and personal space when he is away from India, that the players can walk on the streets without getting mobbed by fans, as would be the case in India.
* The story was updated after the hotel in question released a statement.
Tags: ICC Men's T20 World Cup, India, Virat Kohli