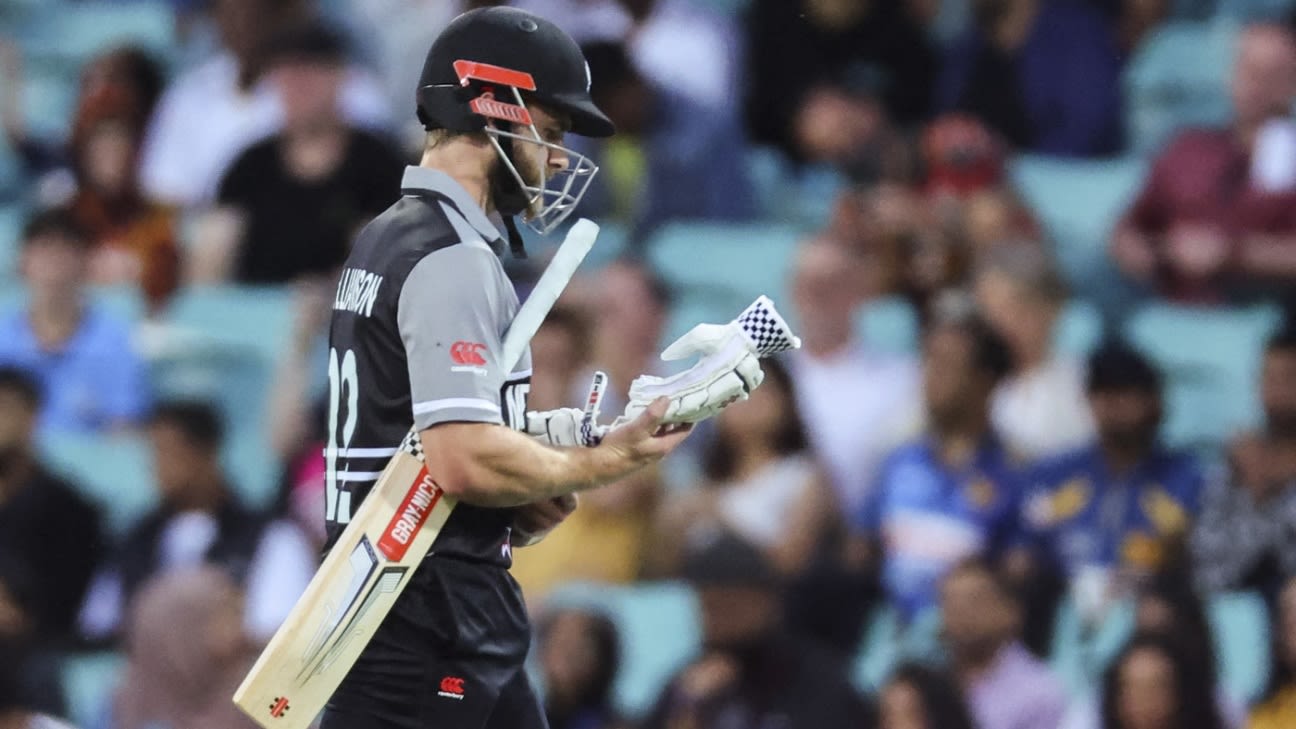 Glenn Phillips and Mitchell Santner have thrown their support behind struggling captain Kane Williamson, backing him to come good “at some point”. Williamson’s performance came under scrutiny after New Zealand lost to England by 20 runs in Brisbane. The New Zealand captain faced 40 balls, and scored as many runs, taking his tally at this World Cup to 71 off 76; not once during this time has he batted at better than a run-a-ball in any innings.
The length of time he was at the crease on Tuesday – this is the most number of balls he has faced in a T20I since the 2021 T20 World Cup final – only served to further highlight how much the chase was hampered by a batter who was struggling to keep up with the asking rate. He managed just three boundaries, particularly struggling to get away the slower bowlers, as he has done for the most part of the year.
It also highlighted the difference in approach England and New Zealand took to pacing their innings. While Dawid Malan was used as a floater when England realised they needed more power up top – he eventually came in at No.8 – Williamson batted at No.3. The asking rate ballooned to just under 12 when Williamson was dismissed in the 15th over.
That it was still in touch was thanks largely to Phillips’ 62 off 36 and he resolutely backed his captain. “Kane’s gold at three for us,” he said. “He understands situations and I know he had a little bit of a tough day today. But with his experience, the ability to take a game deep and command the middle overs is crucial. To be able to have myself, [James] Neesham, Daryl [Mitchell], as well as [Mitchell] Santner doing our role at the end, having Kane doing what he’s doing at the moment. We know that he’s going to come right at some point, he always does and we can’t necessarily judge him by one game. England bowled really well to him and they shut down his areas. Next game he could very easily get 50 off 20 balls as well so we back him fully.”
Santner, too, put it down the way England bowled than any struggles Williamson might have had.
Kane Williamson struggled to accelerate at the Gabba•Getty Images
“I think it’s the way England bowled,” he said. “They bowled very well through the middle there. The spinners bowled very well at Kane. If you look at the partnership, Glenn was going pretty good, and Kane was playing the anchor. We got ourselves into a good position five or six out, and I think there was a couple of quality overs from Sam Curran and Chris Woakes that took it away from us in the end.
“But I think the English spinners did a great job as well. They had three. I thought Mo [Moeen Ali] probably could have bowled a couple more overs after watching that first one. I think they kind of adjusted pretty well to the surface, a lot of cutters into it.”
Phillips also suggested the pacing of the innings might have been pre-planned as part of the style in which New Zealand play T20I cricket. “We try to stick to our batting blueprint as we went,” he said. “We had the wickets in hand to try and do it but obviously the Gabba is a big ground and it’s not exactly like you can just target one end.
Related
“Even the small end is still 70 metres or so, so it does require a lot of effort and, and you need a lot of things to go your way to be able to chase whatever it was off the last seven overs. Unfortunately it didn’t go our way today. We tried our best but credit to the England bowlers for how they bowled it at the death, though. They took it away from our hitting zones.”
Santner, though, admitted New Zealand might have back-loaded too much, even if the wicket was slower than New Zealand anticipated. “We did kind of leave it late, but we had wickets in hand try to make a surge at the end. I think Neesham and a few others got dismissed and it kind of got away from us.
“I think, if you look at the position we got ourselves in, it was a good one. I guess the run rate might have been at 12s, but we still had a few wickets in the tank. But I think credit goes to the way England bowled there at the end. Woakes and Sam Curran made it tough to score, and if you can chip wickets out at the end, it kind of dents the momentum.”
Tags: England, England vs New Zealand, Glenn Phillips, ICC Men's T20 World Cup, Kane Williamson, Mitchell Santner, New Zealand