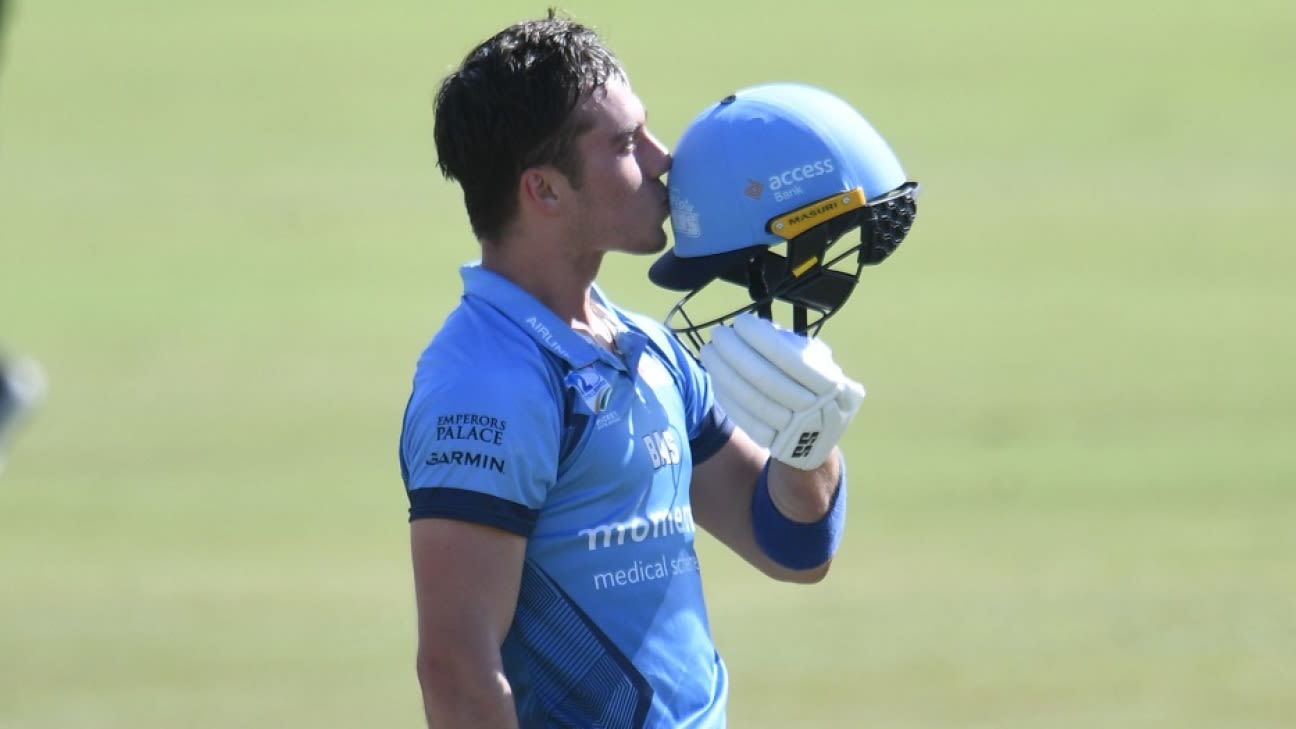 Forget grounds and nets and training. If you want to break records in cricket, get hooked on Instagram. It certainly did the trick for Dewald Brevis who took the world by storm on Monday, cracking 162 off 57 balls in a T20 game in South Africa. The 19-year old batter’s shots bear a striking resemblance to AB de Villiers and it is entirely by design.
Related
“From young – and still now – I watch lots of videos even on Instagram about AB and all these guys, [as to] how they hit the ball,” Brevis told Supersport after hoisting his domestic team, the Titans, up to an eye-watering 271 for 3 against the Knights in the CSA T20 Challenge. “And I like AB’s natural bat swing. And back in your head, you get a visual of how the ball goes, how the bat falls and everything. So I try to watch as most as much as possible, and to just also be myself.”

A quiet game in Potchefstroom quickly gained global acclaim as Brevis began smashing records. He hit the fifth-fastest hundred in T20 cricket – getting to the landmark off just 35 balls – and kicked on to score the joint third-highest score ever in the shortest format.
“Even as a young boy, I have always wanted to hit the ball as far as possible,” Brevis said. “And for me, from the start it’s always [about being] positive and fearless. You don’t want to go on the reckless side, but just play ball by ball, stay positive and be in the moment. I just stayed in the moment…
“I’m always looking to hit boundaries. I think that’s a very important thing in playing fearlessly and aggressively is to be in a very strong position. And if the ball is there, you take it on. But if you wait for the ball long enough, if it’s not there to be hit, then that (waiting for the next one) happens naturally. So you look to it in straight, if it’s a bit back of a length coming up, if you’re in a strong position, you just wait for it. And if it’s a good ball, naturally, you just hit the bat, then it’s one.”
Brevis’ 162 is now the highest score in the CSA T20 Challenge or the CSA T20 Provincial Cup, bettering Pieter Malan’s 140* for West Province during the 2014-15 domestic season. So, inevitably, there were questions about whether he is ready for national selection, which were about the only things he decided to play with a dead bat.
“This is a next stepping stone,” Brevis said. “I believe that the people in control they know the best. Everything works out as it should. This is where I have to be. I have to do this. This is part of my journey. I am at the right place where I need to be. We never know what happens.”
It is understood that South Africa do want the teenager in their squad, but first they’d like him to get through a season of domestic cricket. Franchise T20 sides have had no such reservations. Mumbai Indians picked him on the back of his record-breaking efforts at the Under-19 World Cup in February, and he will be representing them again in the SA20. He has also played for St Kitts & Nevis Patriots in the CPL and will soon turn out for Kandy Falcons in the Lanka Premier League.
But that’s in the future. For now, Brevis is just wants to soak it all in. “Its a very special day,” he said. “A few things haven’t really sunk in yet. I am so grateful for the talent that God gave me. It’s really special and really lovely to be able to live my life to the fullest by playing cricket.”
Tags: AB de Villiers, CSA T20 Challenge, Dewald Brevis, South Africa, Titans vs Knights