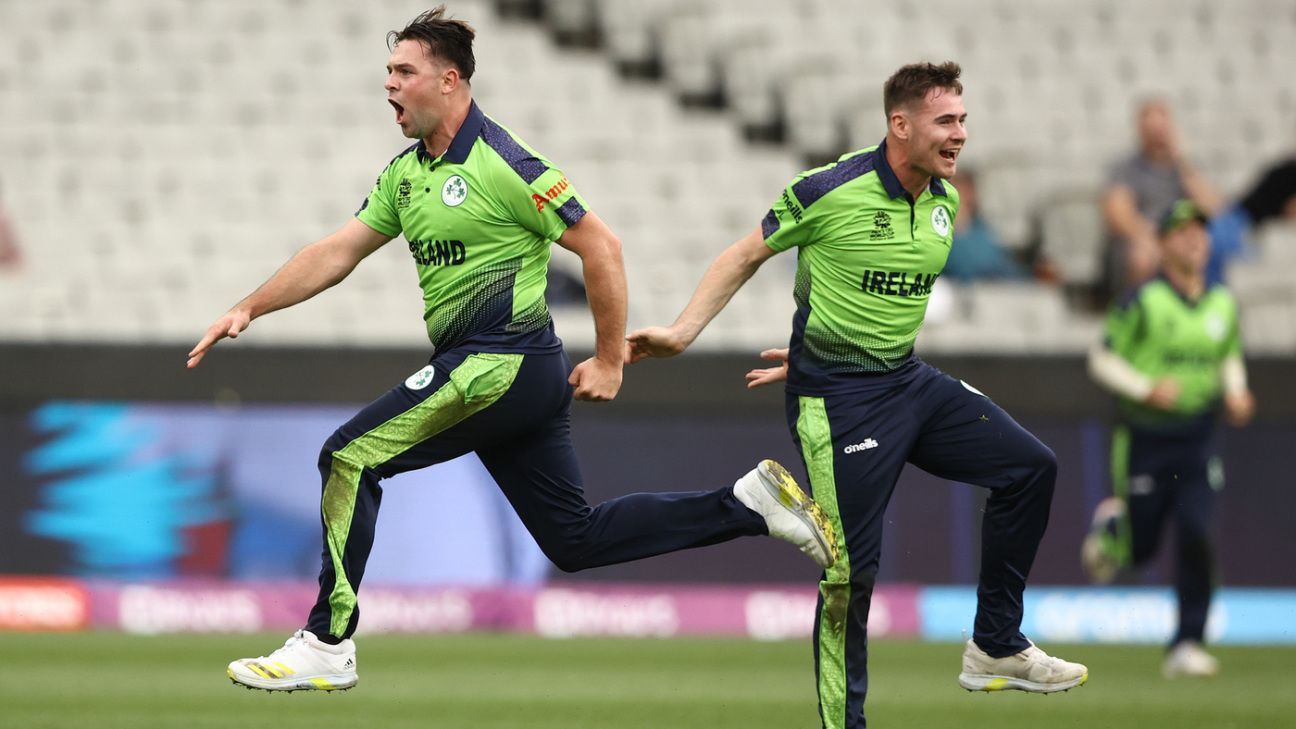 While not yet certain, it feels as though this group is becoming a race for the second semi-final spot after New Zealand made a further statement with their big win over Sri Lanka. If that is indeed the case, then Australia and Ireland are firmly in that tussle. It may have felt unlikely that these two sides would have been equal on points ahead of this meeting but Ireland’s victory over England is one of the reasons things are so tight – Ireland go into this match marginally ahead of the hosts on net run-rate.
It will be just the second time the two sides have met in T20 after a World Cup clash in 2012 where Australia came out winners by seven wickets. Although it was 10 years ago, Australia will likely have five players from that game. Despite the England result, Australia will start as comfortable favourites at the Gabba but there remains enough uncertainty around their form that nothing can be taken for granted. Marcus Stoinis hauled them over the line against Sri Lanka, but the washout against England left unanswered questions.
Related
The main one remains whether Steven Smith will find a spot to return to the side having been pushed out heading into this tournament. Australia have gone with a power-heavy line-up – captain Aaron Finch said on Sunday that the team had batters who can be adaptable – but in a tournament where the ball is holding sway, there is an argument for the skills that Smith brings.
Ireland will probably feel more frustrated by the double-header washout at the MCG because, on a high after beating England, they would have been confident of pushing hard for another two points against Afghanistan. Captain Andy Balbirnie thought they may have been one ball away from defeat the way Moeen Ali was playing, but they were full value for the win. However, they will want to improve the middle-order batting after they lost 9 for 54.
Given Australia close their group matches with games against Ireland and Afghanistan there has been a lot of talk about net run rate which could yet decide qualification, but Finch followed Glenn Maxwell’s comments from the previous day by saying such a focus can be dangerous and a position of strength has to be earned before taking advantage of it. In a group of narrow margins, though, it could be vital.

David Warner hasn’t quite got going yet in the tournament with scores of 5 of 11, but he has had a magnificent run in T20Is dating right back to 2019 since when he has averaged 56.52 with a strike-rate of 144.35. He played a crucial role in Australia’s progression in last year’s World Cup where his rapid 89 off 56 balls against West Indies helped lift their net run rate. Don’t rule out a similar impact this time.
Josh Little had a big impact against England – coming out as ESPNcricinfo’s MVP – as he removed Jos Buttler and Alex Hales inside the powerplay. His left-arm angle could be vital again against Australia with the line of attack having often troubled Finch and also being a good option against Warner, whose lowest average against a style of bowling in T20Is comes against left-arm pace. And since 2020, the difference is even more stark with an average of just 14 against them and four dismissals, one every 13 deliveries faced.

It feels likely Australia will retain the same batting order, not least because of the net run rate factor, although Smith will be considered. Adam Zampa would have returned against England after Covid and Matthew Wade, who would have played with it, has now tested negative. Finch did not rule out a reshuffle with Cameron Green coming in as he largely kept every option open.
Australia (probable) 1 David Warner, 2 Aaron Finch (capt), 3 Mitchell Marsh, 4 Glenn Maxwell, 5 Marcus Stoinis, 6 Tim David, 7 Matthew Wade (wk), 8 Pat Cummins, 9 Mitchell Starc, 10 Adam Zampa, 11 Josh Hazlewood
It would be a surprise if Ireland changed the winning side from the England game, unless they wanted to strengthen the spin attack.
Ireland (probable) 1 Paul Stirling, 2 Andy Balbirnie (capt), 3 Lorcan Tucker (wk), 4 Harry Tector, 5 Curtis Campher, 6 George Dockrell, 7 Gareth Delany, 8 Mark Adair, 9 Fionn Hand, 10 Barry McCarthy, 11 Josh Little

You’ll get good pace and carry at the Gabba, but the bounce should be true and it can be a terrific place to bat although Bangladesh and Zimbabwe made it seem tricky. There is a small chance of a shower very late in the day.

“We have seen how damaging Ireland can be if you give them a sniff in a game. They have got some seriously talented players and some experience, especially at the top of the order. They are never a team you can take lightly. If the wicket has got anything in it they have got very good bowlers to maximise that as well.”
Aaron Finch on the danger of Ireland
“I think we know if we play pretty much near our best that we’re going to be able to compete with anybody here.”
Gareth Delany on the channelling the confidence from the England victory
Tags: Australia, Australia vs Ireland, ICC Men's T20 World Cup, Ireland