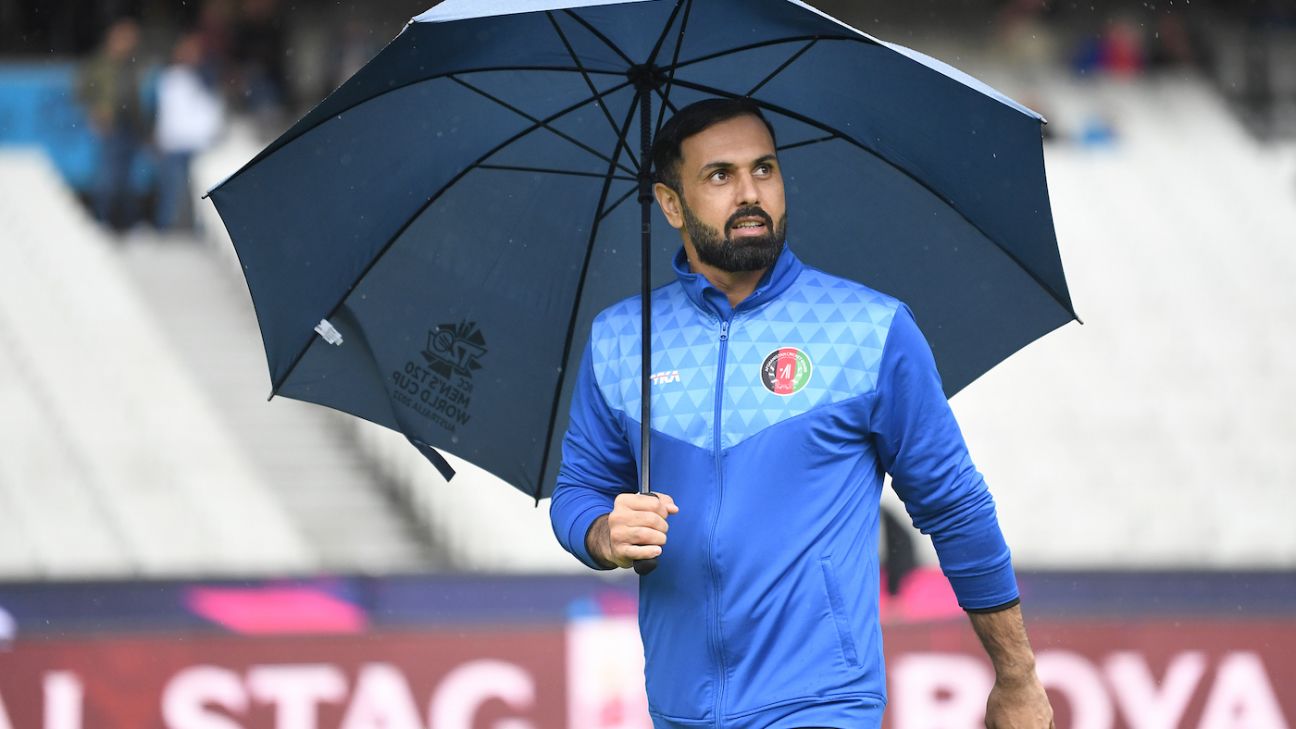 If their Asia Cup tilts are anything to go by, these are evenly matched teams. A quick recap of what happened roughly two months ago: Afghanistan thumped Sri Lanka in the group stage, their quicks ripping through the Sri Lanka batting order to have them 105 all out, before Afghanistan’s top four ran down the target in 67 deliveries; next match, in the Super 4s, Sri Lanka comfortably chased 176 in Sharjah – a ground record.
Both arrive at this match with their campaigns in critical condition. Sri Lanka have just been crushed back-to-back, by Australia, then New Zealand. Afghanistan have had successive matches abandoned because of rain, having earlier been swatted aside by England. The losers here will be knocked out of semi-final contention, though there also seems to be a chance that this match will be another washout, which doesn’t quite end both teams’ semi-final hopes, but might, depending on other results (an especially cruel fate for Afghanistan, who have only lost one match so far).
If play gets under way, Afghanistan will target what has been a brittle Sri Lanka batting order. Opener Kusal Mendis is the key batter in the top order, with a tournament-high 180 runs from six innings at a strike rate of 157. The others have been underwhelming, even Pathum Nissanka, who has made 137 runs, but at a strike rate of only 97.
Afghanistan’s own batting did not quite kick into gear against England, who dismissed them for 112. But as Sri Lanka’s pace attack is depleted, and Wanindu Hasaranga not quite at his lethal best over the past couple of games, Afghanistan will hope for a better outing in Brisbane.
1:27

Trott: ‘Rescheduling matches not an option, not worth thinking about’

In the two matches against Sri Lanka at the Asia Cup, opener Rahmanullah Gurbaz was in blistering touch, crashing 40 off 18 in the first match, before plundering 84 off 45 in the next. He has played in the Lanka Premier League, so knows the bowlers a little more than most. He hasn’t quite lit up the World Cup yet, making just 10 off 9 against England, after not a lot of impact in the warm-ups. The challenge for him is to be able to adjust to the extra bounce often seen at the Gabba. If there’s an opponent he feels confident against right now, though, it’s probably Sri Lanka.
Not to be too blunt, but Sri Lanka’s fielding has been awful this tournament. Which is something of a turnaround from the outstanding performances that helped win them an Asia Cup in September. They didn’t love the cold in Geelong and Hobart (Sri Lanka bowlers going back generations know they must take 14 or 15 wickets in an innings, because their chilly team-mates insist on dropping several in cold weather). But they had no such excuse on a sunny day in Sydney, where Nissanka’s drop of Glenn Phillips may have cost them the match. All up, they have dropped eight catches, and have shown sloppy ground-fielding technique to boot, right through the tournament. They can’t afford any mistakes with the path to a semi-final already treacherous for them.

The Gabba’s customary bounce and swing will likely be on show in the afternoon, but that’s if the rain stops for long enough to allow a game. There’s a 90% chance of rain according to some forecasts.
Rain has followed Afghanistan around at the T20 World Cup•ICC via Getty

“We know we’re the Asian champions. We are using that for confidence. Our mentality is very good. We are trying to bounce back from the match against New Zealand.”
Sri Lanka fast bowler Kasun Rajitha.
“I think we’ll be fresh. We will have a lot of energy going into the game, so it’s exciting times. We’ve played here in a pre-tournament game, and had that experience. And we had over two weeks preparing here in Brisbane. It’s a little bit warmer now than it was when we were here preparing for the tournament.”
Afghanistan coach Jonathan Trott.
Tags: Afghanistan, Afghanistan vs Sri Lanka, ICC Men's T20 World Cup, Sri Lanka