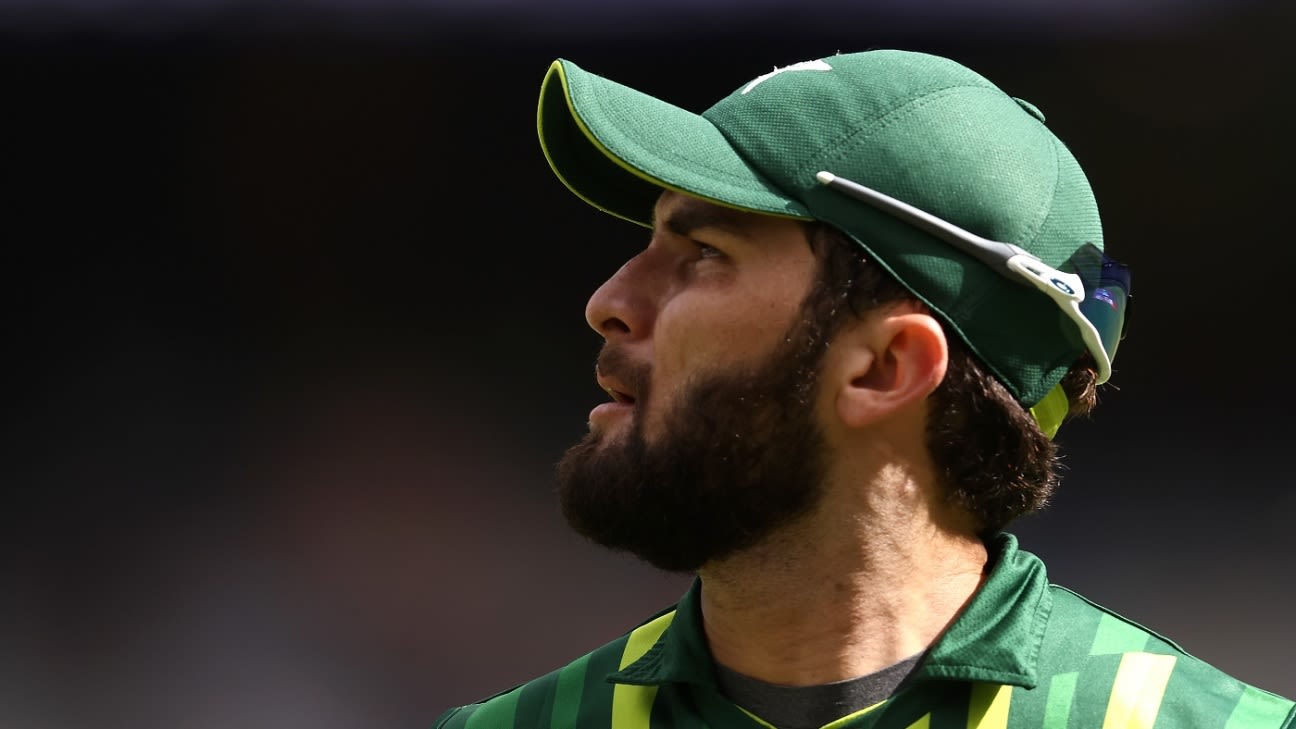 Shaheen Shah Afridi might not be playing this T20 World Cup at full match fitness after he had been out for three months with an injury to his right knee. He is trying though, but it has not been easy to get back to his best after such an injury. There has been some criticism in Pakistan for playing Afridi when not fully fit, but Afridi did say his pace has not been down this World Cup.
“It is not easy to come back from such an injury after three months,” Afridi said after Pakistan’s first win in the tournament. “May god never put anyone through this injury but those who pick up this injury obviously know how difficult it is. I am trying to give my 100%. I think my pace was similar earlier too. The average pace was around 135-140 kph; I am trying to get back to full fitness. Match fitness is different. When you come back after three months, it is difficult to put in full effort [immediately].”
Afridi went wicketless in the first two matches and was among the more expensive bowlers. Against Netherlands in Perth on Sunday, he set the tone with hard lengths and also managed to get on board when it comes to wickets.
“I was alone [in England where he did the rehab], I struggled for two-three months,” Afridi said. “I have never had such a long injury layoff. Of course your friends and team-mates back you and appreciate you. My target was to play the World Cup, and thanks to god I could.
“For the first two months I didn’t even walk properly because the swelling would increase. I just went to the gym then. In the last two weeks I bowled in the indoors so that I am somewhat prepared to run on these surfaces. The summer was over so there were no outdoor pitches available so I could only bowl indoors.”
After their close defeats to India and Zimbabwe, Pakistan were left needing to win their remaining two matches and also hoping that India do them a favour by beating South Africa. Both Afridi and Shadab Khan said they were not thinking too much about the other results, and that the first two matches could have easily gone their way.
“We lost two close matches but as a team we know we are a better team than that,” Shadab said. “At the same time we dominated those two matches for long periods. They are history now. We are just sticking together and trying to do our best.
“See we can control only what is in our hand. So we are not thinking of the other matches. If it is in our fate, we will make it.”
Afridi was asked how difficult it was going to be to win against South Africa. “No team is easy in this World Cup,” he said. “It’s good we are on board. We played the last two games well too but the result is not in your hands. We will try to give our best in the remaining matches.”
Tags: ICC Men's T20 World Cup, Netherlands, Netherlands vs Pakistan, Pakistan, Shaheen Shah Afridi