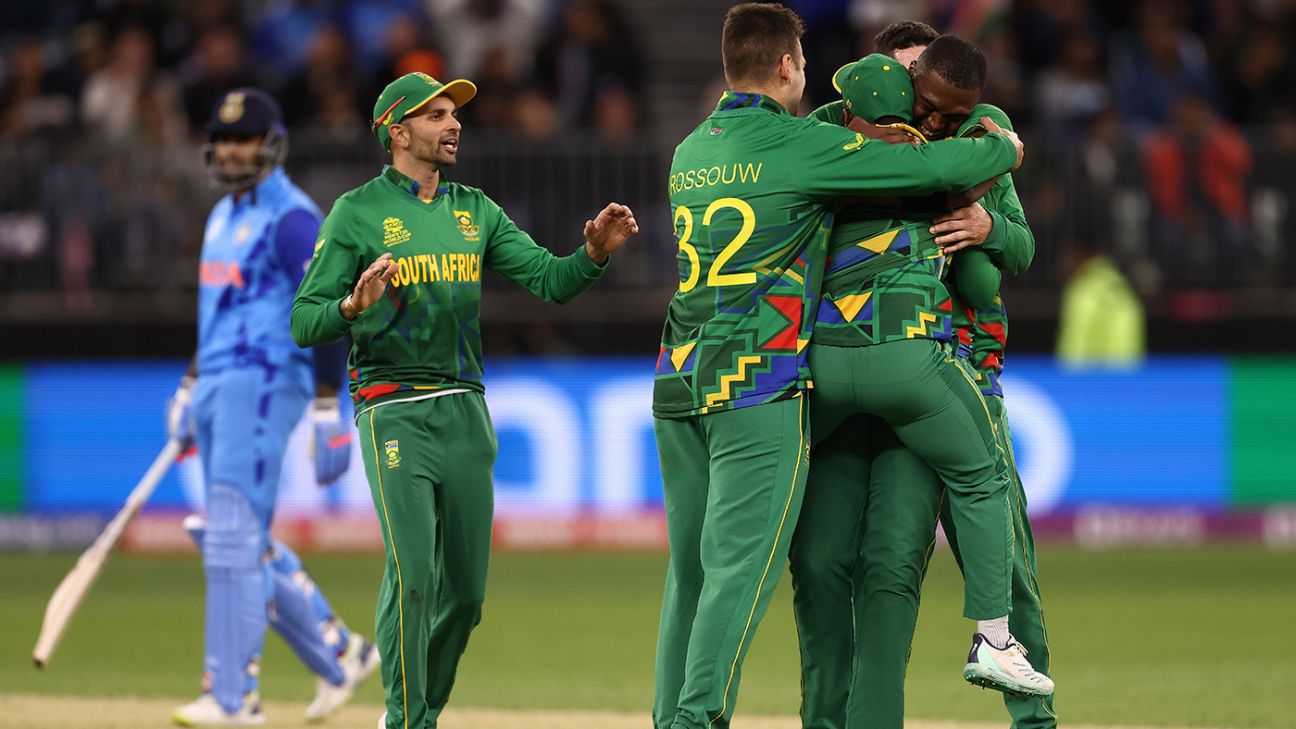 South Africa 137 for 5 (Miller 59*, Markram 52, Arshdeep 2-25) beat India 133 for 9 (Suryakumar 68, Ngidi 4-29, Parnell 3-15) by five wickets
South Africa moved to the top of the group 2 points table and boosted their chances of making the semi-finals after recovering from 24 for 3 to successfully chase 134 against India. Aiden Markram and David Miller were the architects of South Africa’s triumph, scoring half-centuries each and sharing a 76-run fourth-wicket stand.
On a pacy pitch, South Africa’s quicks set the tone with hard lengths and plenty of speed. They reduced India to 49 for 5 in the ninth over before Suryakumar Yadav held the innings together with his 11th T20I half-century but he lacked support. He shared a 52-run partnership with Dinesh Karthik, who scored only six of those runs. Lungi Ngidi and Wayne Parnell were the main beneficiaries of South Africa’s approach and took seven wickets between them but all the quicks were impressive. Anrich Nortje brought the heat on a chilly evening and clocked over 150kph with regularity while Kagiso Rabada, for a change, played only a supporting role.
India’s attack were also impressive as they made use of fuller lengths and found swing. Some of the differences between the two sides lay here. South Africa bowled 50 short or short-of-a-good-length deliveries and took six wickets for 34; India bowled 48 and took one for 53.
Related
In the end, both captains also had to gamble on how they used their spinner. Temba Bavuma can’t catch a break with the bat and failed again but made the right decision to only use Keshav Maharaj for three overs, while giving Markram one. Between them, they conceded 33 runs in four overs. Rohit Sharma bowled R Ashwin out and used him in the 18th over. By then, Markram was out but Miller was still at the crease and South Africa needed 25 runs from 18 balls. Ashwin’s over cost 13 runs and though he dismissed Tristan Stubbs, Miller finished it off for South Africa.
This result has big implications for the rest of the group, particularly Pakistan, whose semi-final hopes are hanging by a thread. South Africa’s win means that not only do Pakistan have to beat South Africa on Thursday but also hope either India lose to Bangladesh and Zimbabwe or South Africa are beaten by the Netherlands.
2:23

India had a curious start against the swinging ball and took 10 deliveries to get off the mark – the longest in their T20I history – before both openers breached the big boundaries. Rohit Sharma hooked Rabada over fine leg and KL Rahul whipped Parnell over midwicket but neither scored too much more. Ngidi was introduced in the fifth over and made an immediate impact with hard lengths. Rohit mis-hit his first delivery over the covers but it fell safely. Then, he was cramped on the pull, the ball caught the splice of the bat and went straight up, giving Ngidi enough time to saunter across the square and take the catch. And Ngidi was just getting started. At the end of that over, Rahul was foxed by the extra bounce and edged a ball he looked to guide to third man. Markram was perfectly positioned, almost on the edge of the ring, at slip to take the catch. India were 26 for 2 and finished the powerplay on 33 for 2.
KG’s catches
Virat Kohli mounted a brief riposte with back-to-back boundaries against Ngidi but when he tried to take on the bouncer, he got it wrong. Kohli sent a pull towards fine leg where Rabada ran around the corner from a deep-square position to take a good running catch, as casually as you like. Like Ngidi, Rabada also went one better. In Ngidi’s next over, Hardik Pandya took his chances against the short ball and pulled to fine leg. He connected well but not well enough and did not get the distance he was looking for. Rabada did and ran from the boundary rope and leapt forward and took a diving catch with both hands, even as both feet left the floor. India were 49 for 5.
Reach for the SKY

Suryakumar scored more than half of India’s total runs and more boundaries than any of their other batters combined. Apart from his opening boundary – an edge that flew over first slip off Nortje – he timed and placed his shots well and took on the short ball with a level of discernment. He used his wrists particularly well, targeted Maharaj, which forced Bavuma to turn to Markram for an over, and then dented Ngidi’s figures when he took 11 runs off his final over. Overall, Suryakumar scored 25 runs off the 12 balls he faced from Maharaj. His 68 came at a strike rate of 170, while the rest of India’s line-up contributed 57 runs at a strike rate of 71.25. In the process, Suryakumar became the highest run-scorer in T20Is in 2022, going past Mohammad Rizwan.
Aiden Markram and David Miller put up a 76-run stand to settle South Africa’s chase•ICC via Getty Images
Swing for Singh
While South Africa used bounce to make their early incisions, India relied on swing. Arshdeep Singh struck with his first ball, which swung away from Quinton de Kock, who chased it and nicked off. Two balls later, he hit Rilee Rossouw on the back pad. Arshdeep thought the movement was taking the ball wide of leg stump but Rohit disagreed. He reviewed, with ball-tracking showing that it would go on to hit the top of middle and leg. Rossouw was dismissed for his third duck in five innings, all at the hands of Arshdeep. In between that, Rossouw has scored two centuries. In nine deliveries, South Africa were 3 for 2 and things didn’t get much better. Bavuma’s blues continued as he tried to ramp Mohammed Shami over the wicketkeeper but inside-edged to Karthik instead. South Africa ended the powerplay at 24 for 3.
Markram makes his move
South Africa limped to the halfway mark in their innings on 40 for 3 and needed to change gears after the drinks break. Markram took on Pandya’s short balls and found the boundary twice in three balls before putting pressure on India fielders by responding to Miller’s call for a quick single. Miller tapped the ball to backward point, Suryakumar swooped in and shied at the striker’s end but missed. Then Markam took on Ashwin, advanced down the pitch and hit a carrom ball for four before heaving it to deep midwicket where Kohli juggled and then dropped the catch. Markam was on 35 at the time. With 25 runs scored off the 11th and 12th over combined, India were forced to bring back a frontline seamer early. Shami’s third over only cost three runs but India squandered a third opportunity for a wicket. Miller fended a delivery and Markram was already two-thirds of the way down, so Miller ran. Rohit had three stumps to aim at, but missed. Ashwin continued and so did Markram, but not before Miller cleared his front leg to hit Ashwin for six over long-off. Markram then sent him over long-on for six more. South Africa scored 45 runs in the four overs after drinks to set themselves up for the win.
Tags: Aiden Markram, David Miller, ICC Men's T20 World Cup, India, India vs South Africa, Lungi Ngidi, South Africa, Suryakumar Yadav, Wayne Parnell