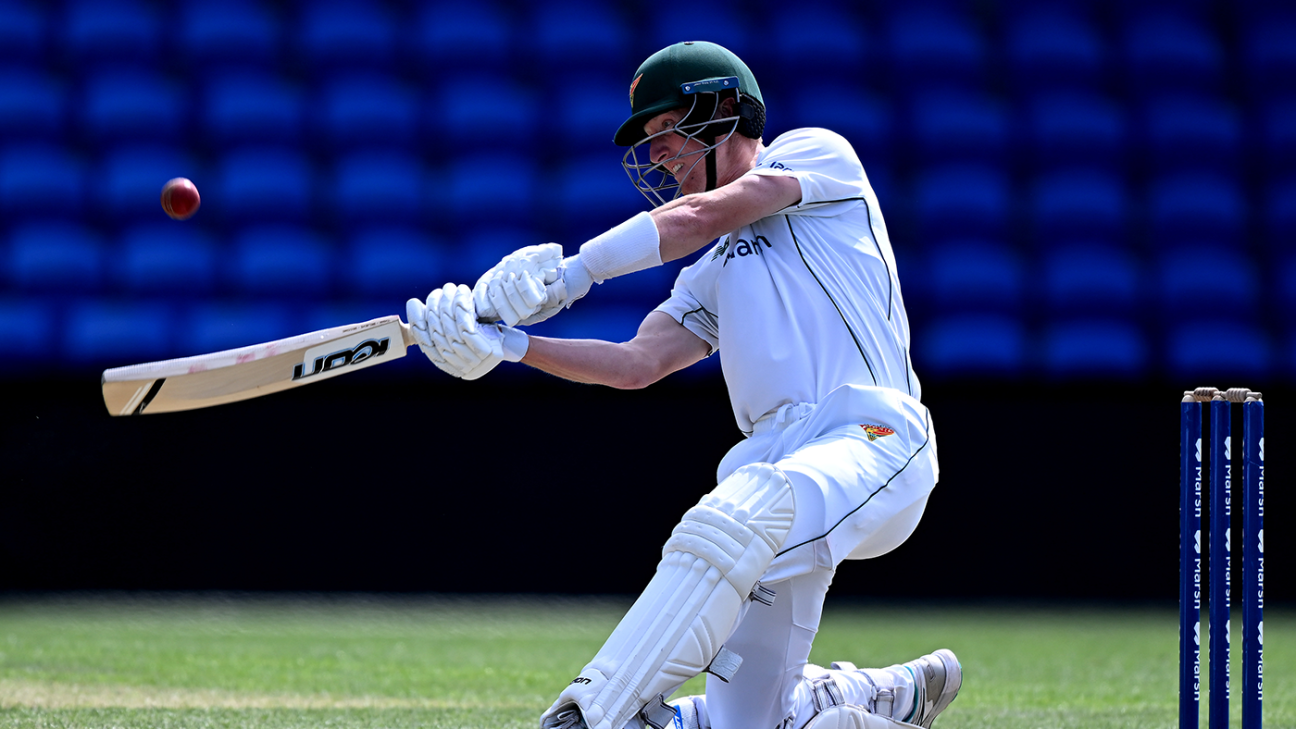 Victoria 7 for 351 dec and 1 for 44 trail Tasmania 535 (Silk 154*, Ward 91, Freeman 57, Jewell 53, Perry 4-112) by 140 runs
A career-best innings from Jordan Silk sped Tasmania past Victoria’s first-innings total on day three of the Sheffield Shield match in Hobart.
At stumps, slow-and-steady Victoria were 1 for 44 after the dangerous Marcus Harris was bowled for 14 five overs before stumps by a sizzling delivery from paceman Riley Meredith.
Silk produced the definition of a captain’s knock to guide his team to a mammoth total of 535. In the first session, Silk replaced reigning Bradman Young Cricketer Tim Ward (91), who missed out on his second Shield century by edging Cameron McClure to wicketkeeper Sam Harper for a regulation catch.
Related
Silk started his innings patiently, but with time of the essence he went into overdrive after lunch. He brought up his half-century with a six over deep midwicket and a four past third man in consecutive balls, but the fun wasn’t over there.
Once the Tasmanians passed Victoria’s first innings total around an hour after lunch, Silk and Jarrod Freeman went into party mode to send the run rate skyward.
The pair brought up their 100-run partnership 10 minutes before tea but Freeman was caught at long on by Mitchell Perry on the last ball of the session.
The wicket was the first of the match for Ashes hero Scott Boland, who had been the only Victorian bowler without a scalp to that point. He wasn’t the only bowler struggling to scupper the Tasmanian juggernaut, though.
Rather than contemplate declaring once he reached his ninth first-class century, Silk kept his foot on the accelerator to finish his innings unbeaten, having struck 14 boundaries including five sixes.
Former Test captain Tim Paine made a quick-fire 24 runs from 25 balls as Tasmania made their intentions known.
Victoria’s first innings was built largely on a century from debutant Ashley Chandrasinghe (119 not out), who announced himself with a mature display at the crease across the first two days.
Tags: Jarrod Freeman, Jordan Silk, Sheffield Shield, South Australia, Tim Ward, Victoria, Victoria vs Tasmania