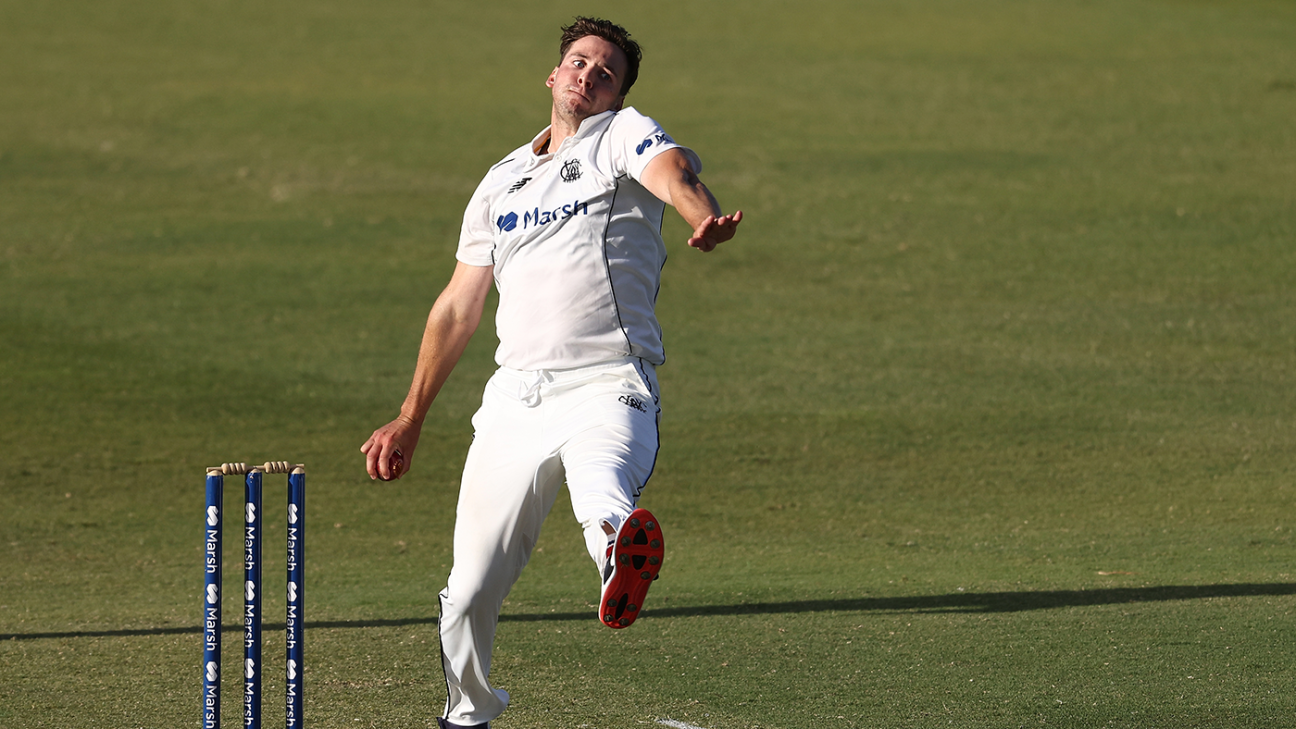 Western Australia 1 for 3 trail Queensland 211 (Khawaja 56, Neser 56, Richardson 4-40) by 208 runs
Jhye Richardson was at his miserly best as Western Australia took the first-day honours in their Sheffield Shield clash with Queensland in Perth.
Richardson snared 4 for 40 from 20.2 overs to skittle Queensland for 211, with the performance a timely boost for the 26-year-old as he attempts to win back his Test spot.
In reply, WA finished the day at 1 for 3 after Mark Steketee removed the scalp of Sam Whiteman for a first-ball duck. Corey Rocchiccioli was sent in as a nightwatchman, and he survived eight balls to ensure WA didn’t lose any more wickets.
Related
Queensland were in a world of pain at 5 for 86 before Usman Khawaja and Michael Neser guided the visitors out of danger.
Richardson looked uncomfortable at times on Monday, but he revealed after play that the problem wasn’t serious.
“It’s just the fat pad on my heel,” Richardson said. “I get a bit of impingement. It bruises up and gets a bit sore. But I managed to get through with some goodies from the doctor, and I’ll be raring to go for the next innings.”
Queensland struggled for runs on the green WACA deck, with the star-studded top order crumbling.  Matthew Renshaw, Joe Burns, and Marnus Labuschagne all fell cheaply as the visitors crashed to 3 for 26.
Richardson set the tone for the day when he found the edge of Renshaw with the fifth ball of the morning. Alarm bells were ringing for Queensland when Aaron Hardie bowled Labuschagne before getting Burns to edge behind.
Khawaja and Jack Clayton combined for a 44-run partnership that spanned 22.1 overs. Clayton eventually fell at the hands of Lance Morris, and Queensland crashed to 5 for 86 when Jimmy Peirson inside edged Richardson through to the keeper.
Khawaja proved a stiffer obstacle to remove, but his innings was finally ended when he was stumped off the bowling of spinner Rocchiccioli.
Neser was given a life on 14 just before the break when a diving Cameron Bancroft dropped a difficult one-handed chance at second slip. His half-century ensured Queensland made it past 200.
Veteran Shaun Marsh was a notable absentee yet again for WA when the squads were lodged. Marsh had been tracking well in his recovery from a knee injury, but his comeback plans were scuppered by a recent calf tear.
Tags: Jhye Richardson, Michael Neser, Queensland, Queensland vs West Aust, Sheffield Shield, Usman Khawaja, Western Australia