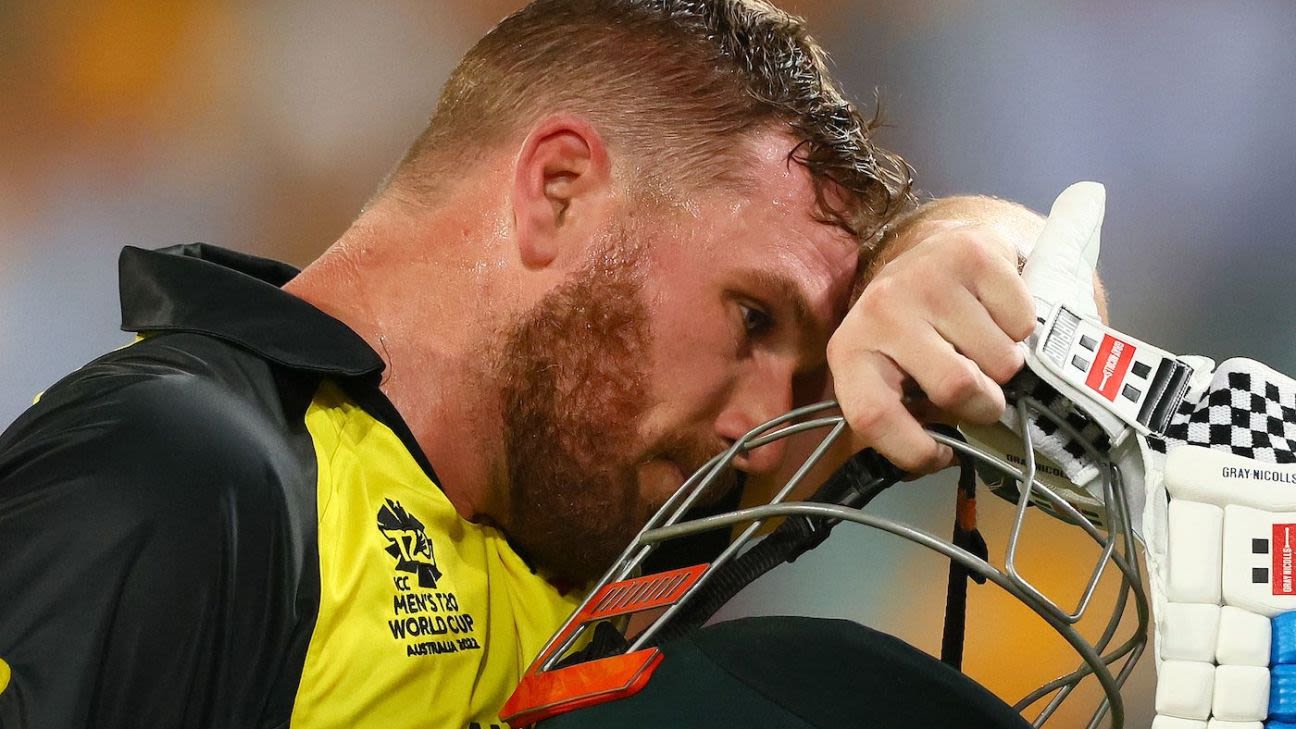 Despite carrying a hamstring injury, captain Aaron Finch remains a chance to play in Australia’s must-win T20 World Cup game against Afghanistan on Friday night.
Finch, Marcus Stoinis and Tim David all suffered hamstring injuries in Australia’s win against Ireland in Brisbane on Monday night. Finch suffered what he described as a “little hammy twinge” while batting. He fielded and captained for the first seven overs of Ireland’s chase but then left the field and didn’t return. David also batted, making 15 off 10 but did not field at all after experiencing some hamstring tightness. Stoinis batted and bowled the 10th over of the innings, picking up a wicket, but left the field at the end of the 11th and did not return.
Both Finch and David did some light running at Australia’s optional training session at Karen Rolton Oval in Adelaide on Wednesday but didn’t bat. Neither reached top speed but both moved relatively freely. Stoinis didn’t participate in the session at all.
Related
Australia’s chairman of selectors George Bailey confirmed Stoinis is certain to front against Afghanistan in Adelaide while Finch and David face further fitness tests, but haven’t been ruled out.
“We will keep assessing them over the next 48 hours,” Bailey told reporters on Wednesday. “I think Stoin in particular was more precautionary. I think he’s certainly good to go. The other two are actually pretty good, they are moving pretty well out there today.
“I haven’t had a chance to grab our medical staff.
“I trust the information that they’ll give us. I trust the information that Finchy will give us and we’ll give it the time it needs.”
If Finch is unavailable, Matthew Wade will take over as captain having led Australia six times in the last two years in Finch’s absence. If both Finch and David are unavailable then Cameron Green and Steven Smith will likely slot straight into those respective spots.
If one of Finch or David is available, then Australia’s selectors have a decision to make. Green gives Australia an added option with the ball, particularly if there are any doubts around Stoinis’ bowling ability given Mitchell Marsh has not bowled much in this tournament due to an ongoing ankle issue. But Green would likely open the batting given his inexperience in the middle order. If Australia need a middle-order player and Stoinis is fine to bowl, Smith would be the more likely option.
Australia must defeat Afghanistan in their last group game to have a chance of advancing to the semi-finals. The hosts sit third in their group behind New Zealand and England. All three are level on five points and if they each win their remaining group game, then net run-rate is set to decide which two teams advance to the knockout phase.
Australia have an inferior net run-rate due to the hammering they copped from New Zealand in the opening game of the Super 12s. They also had a chance to significantly improve their NRR against Ireland but failed to capitalise after having Ireland 25 for 5 in the chase.
New Zealand play Ireland at Adelaide Oval on Friday afternoon prior to Australia’s clash with Afghanistan. England have the luxury of knowing what the final NRR scenario will be when they meet Sri Lanka in the group’s last game on Saturday.
“We will obviously work through a few scenarios today around net run-rate and what that looks like,” Bailey said. “The first port of call is making sure you set yourself up to win the game and make sure you’re playing well enough to do that.
“There’s a lot that still remains out of your control. But I just think going in flexible, open-minded and I think we’ve got a team that’s got talent that if they need to put their foot down and do something special, they’ve got it in them.
“There’s only so much you can do on that front because England and Sri Lanka play after us.”
It is mathematically possible Australia could advance to the semis even if England beat Sri Lanka narrowly, but it would require a huge net run-rate boost against Afghanistan.
Tags: Aaron Finch, Australia, ICC Men's T20 World Cup, Marcus Stoinis, Matthew Wade, Tim David