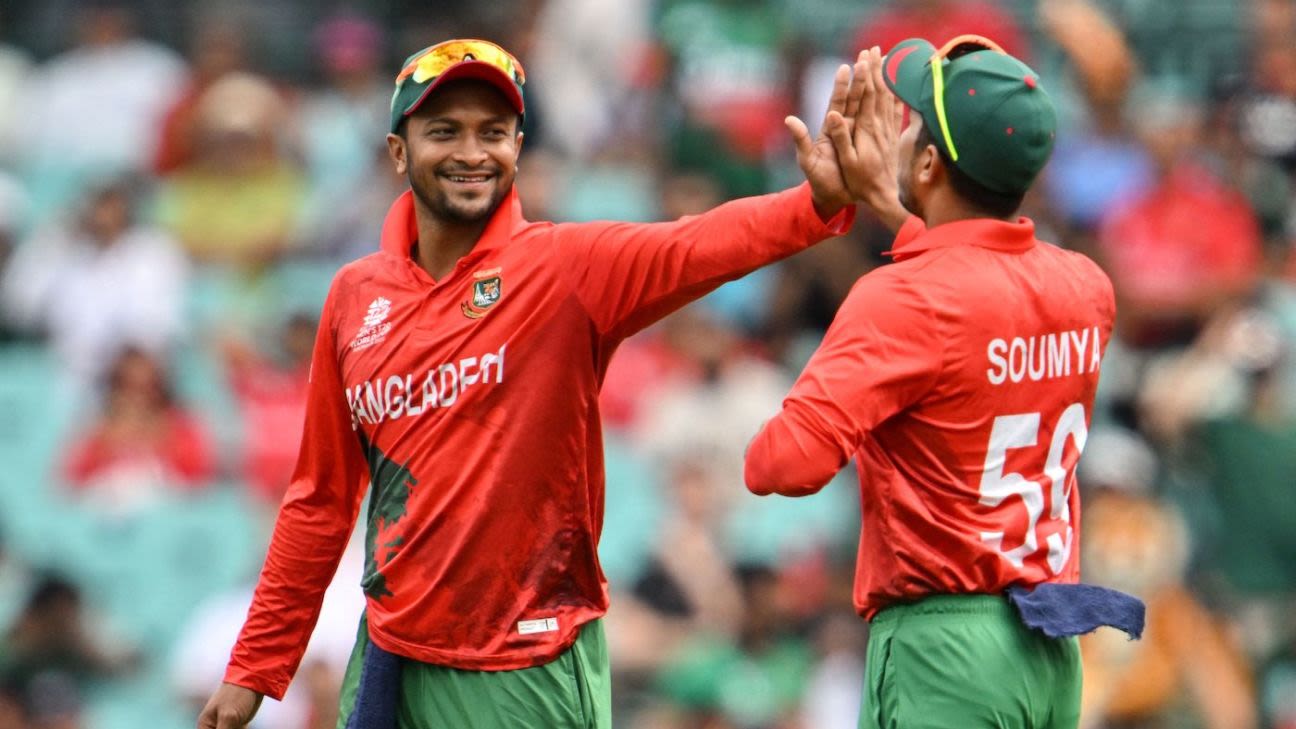 Bangladesh captain Shakib Al Hasan has downplayed the team’s chances against India, who he feels are the “favourites”, but says he will try to produce an “upset”, when the two sides meet in the T20 World Cup in Adelaide on Wednesday. Shakib called on his young team to forget about India’s might and play with a “nothing to lose” mentality, as he feels Bangladesh are “not here to win the World Cup”.
Asked what Bangladesh’s next target is after overcoming Netherlands and Zimbabwe, Shakib said: “We want to play well in the next two matches (against India and Pakistan), so if we can win one of them, it will count as an upset.
Related
“We will be happy to inflict that upset. Both teams, on paper, are better than us. If we play well, if it is our day, why can’t we win? We have seen Ireland beat England, and Zimbabwe beat Pakistan in this World Cup. A similar result will definitely make us happy.
“As I said in Bangla before, India is the favourite team, they came here to win the World Cup. We are not favourites, we didn’t come here to win the World Cup. We know very well that if we win against India, it will be called an upset. We will try to play our best cricket.”
These are usually not the words that fans would want to hear, particularly during a World Cup when emotions are high. India also have a better head-to-head record in T20Is, having won ten T20Is and lost only one against Bangladesh. Shakib feels India will be particularly dangerous at the Adelaide Oval, having played here 29 times compared to Bangladesh’s experience of playing in this venue only once.
“I can’t say that (the day-night timing) makes it equally balanced (for both sides),” he said. “India have played plenty of matches in all formats in this ground [29 times, overall]. Only Taskin and I have played here from our team. Quite naturally, it is not the same feeling. We will try very hard to give our 100 percent, to get the best result for the team.
“They have tied up teams below 160 in all their matches. We have to bat really well to get 160-170, which is a par score in this World Cup. We have to play really well against India’s bowling. They have some world class players.”

“We are turning around from a time when we lost a lot of close matches. We are improving in that regard.”
Shakib on winning close encounters

He also praised his side for closing out tight matches, particularly the one against Zimbabwe in which Bangladesh were expected to struggle on the pacy and bouncy Gabba wicket. Instead, they defended 150 with consistent performances from the fast bowlers and won the game by three runs.
“Most T20 matches are decided in the last two overs. It is important to hold on to the nerve,” Shakib said. “We are turning around from a time when we lost a lot of close matches. We are improving in that regard, by winning a couple of close games.
“I am definitely satisfied (with our performance). We were playing well except for the game against South Africa. It can happen in T20s. We want to play well in the remaining matches, which is very difficult in different conditions and against different attacks. I believe our team is capable of playing well consistently.”
He also hoped that Bangladesh’s 2015 World Cup memories at this venue, when their 15-run win over England took them to the knockout stages of a World Cup for the first time, could inspire them.
Tags: ICC Men's T20 World Cup, India, India vs Bangladesh, Shakib Al Hasan