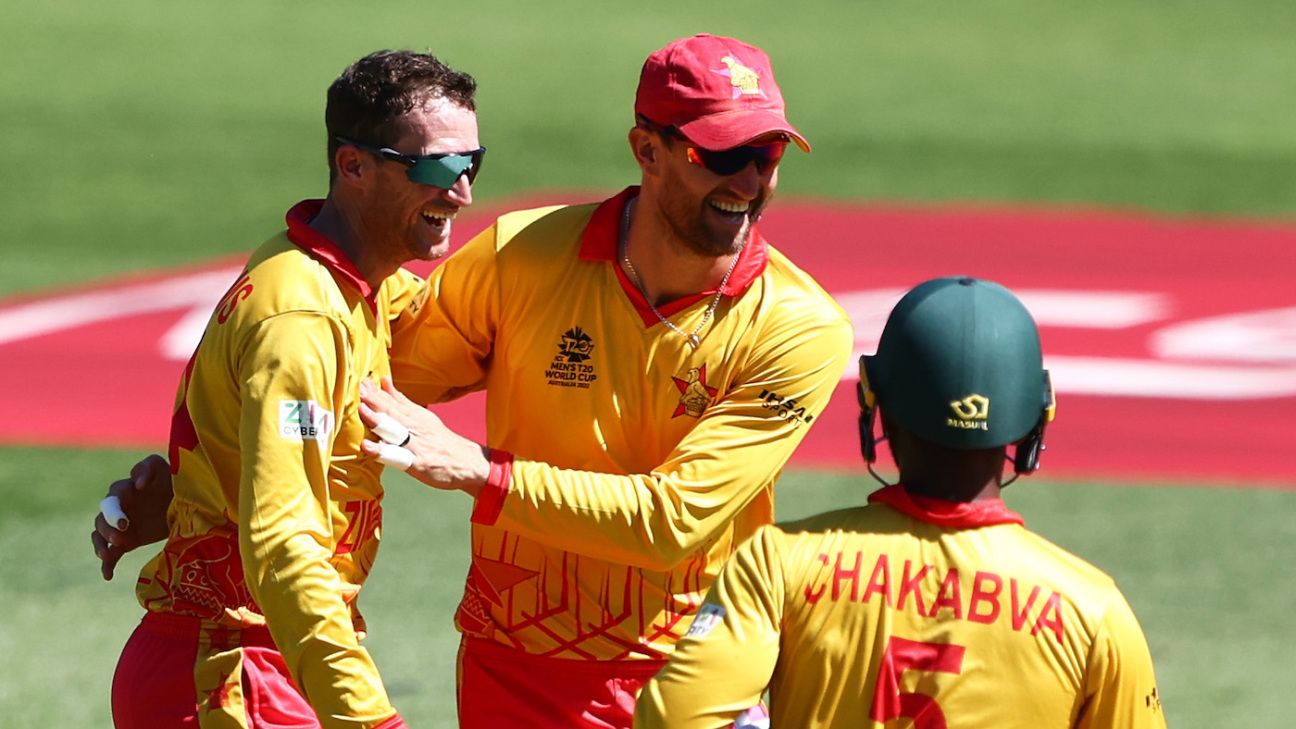 It is not often that Zimbabwe stand a decent chance of qualifying for the semi-final of an ICC tournament. They were one win away from making the final four of the ICC Knockout – later renamed Champions Trophy – in 2000, but fell short against New Zealand; they made the Super Sixes in the 2003 World Cup, but fizzled out in the race to the last four.
All these years later, a well-rated Zimbabwe unit led by an allrounder living a dream are two steps away from history. To begin, they will need to beat Netherlands, something they will surely fancy.
Although they are still in contention, Zimbabwe need a collective performance to keep themselves afloat before the much-tougher challenge of India comes their way. Wessly Madhevere helped them rack up 79 in nine overs against South Africa but the rest of their batters hardly contributed, before the bowling was clubbed for 51 in three overs; but when they squeezed through a one-run win against Pakistan, it was their bowlers Sikandar Raza, Brad Evans, Blessing Muzarabani and Richard Ngarava who helped defend a meagre 130; and come Bangladesh, only Sean Williams made a defining contribution as Zimbabwe fell short by just three runs in pursuit of 151.
For Netherlands, four out of their six games so far in this World Cup – including the first round – saw tight finishes. They won two of those four matches, before India and Pakistan brushed them aside. But like their bowlers showed by dismissing four batters and making Pakistan work hard even in their chase of 92, Netherlands aren’t easy to push over.
Although they are already out of the tournament after threatening to upset Bangladesh in their first game of the Super 12s, the Dutch have certainly left their mark. After all, Max O’Dowd is the World Cup’s fifth-highest run-scorer and Bas de Leede is its joint second-highest wicket-taker.
Zimbabwe and Netherlands don’t meet often – they have played each other only seven times across formats so far – No. 8 will be on the biggest stage and both teams will be relishing it.
Sean Williams is one of Zimbabwe’s most experienced players•Getty Images

Zimbabwe will seek more consistency from their captain Craig Ervine and Sean Williams, two of their most experienced members in the current set-up. They have fallen for a combined seven single-digit scores in 12 innings since landing in Australia, even as Zimbabwe hope they can deliver when it matters most. Both are in the twilight of their careers, and what better opportunity to ensure they walk away with sweet memories?

Netherlands’ bowlers have conceded 160-plus only twice across six matches in this competition. The show has been led by Bas de Leede, who has nine wickets at 14.44, while Paul van Meekeren isn’t far behind with seven at 19.42 and an excellent economy of 5.66. De Leede will turn 23 in a few days’ time; van Meekeren will turn 30 next January but Netherlands will hope these two can serve them just the same way for the years to come.

Zimbabwe have used 13 players in the Super 12s stage, with tweaks only in their bowling line-up. They wouldn’t want to make too many changes to what looks like a settled unit, with the only decision being whom to leave out in case they decide to recall Luke Jongwe.
Zimbabwe (probable): 1 Wessly Madhevere, 2 Craig Ervine (capt), 3 Milton Shumba, 4 Sean Williams, 5 Sikandar Raza, 6 Regis Chakabva (wk), 7 Ryan Burl, 8 Tendai Chatara, 9 Brad Evans, 10 Richard Ngarava, 11 Blessing Muzarabani
Paul van Meekeren has picked up seven wickets at an economy rate of 5.66 at the T20 World Cup•ICC/Getty Images
Netherlands have nothing to lose now, so might give opener Stephan Myburgh another go, considering this could be his farewell tournament. De Leede was substituted against Pakistan after being hit under his eye while batting and might miss out on Wednesday
Netherlands (probable): 1 Vikramjit Singh, 2 Max O’Dowd, 3 Stephan Myburgh, 4 Tom Cooper, 5 Colin Ackermann, 6 Scott Edwards (capt, wk), 7 Roelof van der Merwe, 8 Tim Pringle, 9 Logan van Beek, 10 Fred Klaasen, 11 Paul van Meekeren

It was cold and windy in the build-up to the game in Adelaide, and it might still be cold on Wednesday with up to 2mm of rain also expected. However, the game is unlikely to be affected.

“The real highlight for us would be to make the semis. I think that would really put the icing on the cake. The guys are still very positive that we’ll get there. We’ve just got to come into these last two games with a lot of energy.”
Zimbabwe captain Craig Ervine
“The novelty [of making it to Super 12s] has kind of worn off now after the first three games. We haven’t put in a complete performance in these three games, and so the guys are determined to change that when it comes to these last two matches and walk away with at least one win, but hopefully two wins.”
Netherlands’ Logan van Beek
Tags: ICC Men's T20 World Cup, Netherlands, Zimbabwe, Zimbabwe vs Netherlands