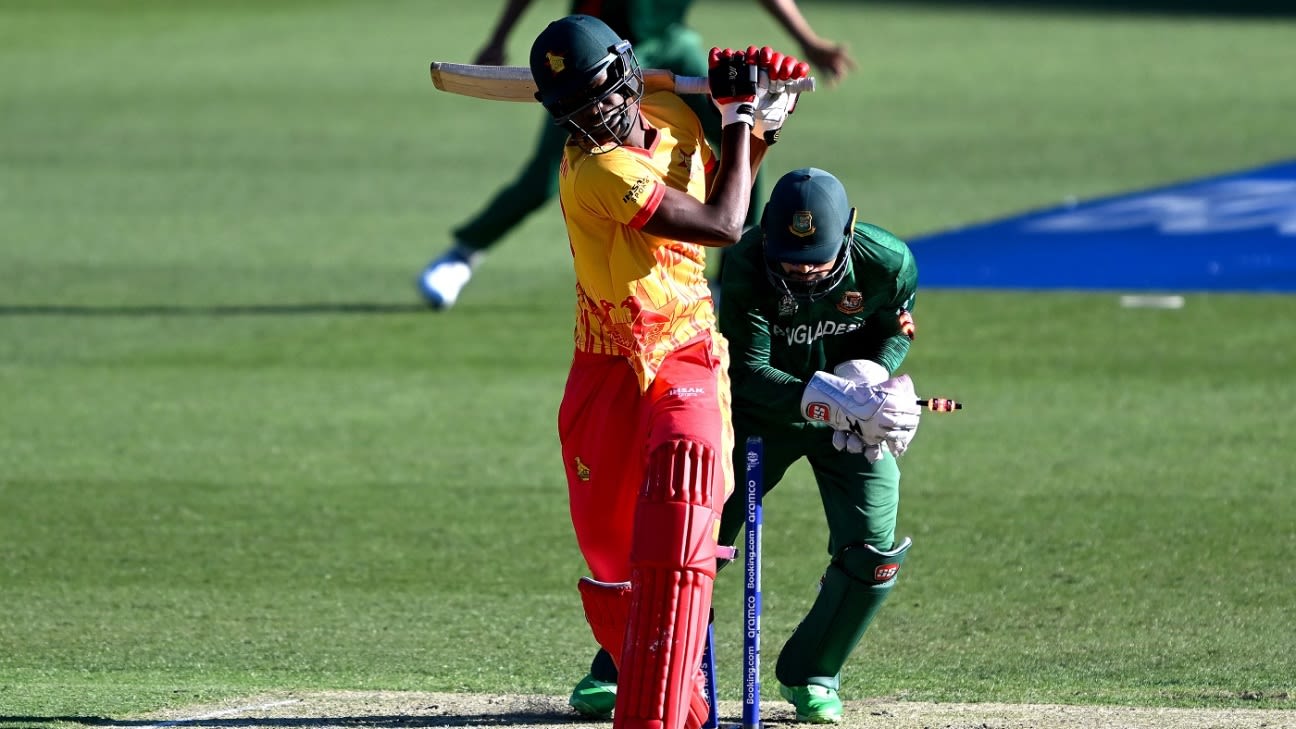 Bangladesh were celebrating, the players had left the field, Blessing Muzarabani had taken his pads off.
This T20 World Cup threw up another extraordinary finish as the players were called back onto the field at the Gabba to re-bowl the final delivery after TV replays had shown that wicketkeeper Nurul Hasan had taken the last ball in front of the stumps.
Amid the chaos, it meant that Muzarabani had one more chance to win the game for Zimbabwe with a free hit and now four runs needed against Mosaddek Hossain, but for a second time in around five ridiculous minutes he swished at fresh air and this time Hasan took the ball correctly and Bangladesh could breathe. Again.
It has been a tournament where the Laws and playing conditions have been delved into a few times. This is the crucial part of the latest drama:

27.3.2 In the event of the wicket-keeper contravening this Law, the striker’s end umpire shall call and signal No ball as soon as applicable after the delivery of the ball.

Even though it quickly became clear the third umpire was checking the initial stumping, players from both sides had shaken hands and gathered near the boundary edge as the replay unfolded. There were looks of disbelief all around when the decision came through, although more from the Bangladesh side who had thought they had already won the match.
However, in the end, Mosaddek held his nerve for a second time after he had been entrusted with the final over that began with 16 needed. Shakib Al Hasan, who probably kept Bangladesh’s tournament alive with a magnificent piece of fielding to run out Sean Williams, had gambled on using up his other bowlers.
Williams, speaking after the match, called the whole episode “extremely weird”.
“I’ve never experienced something like that in a cricket match before, but again, it just goes to show in a T20 game, there’s always a little bit of hope; anything can happen,” he said. “The first time I realised that there was a no-ball was actually when we were walking out to shake the umpire’s hands, and they told us to stop and the replay came on the big screen, and then we all noticed that it was a no-ball. Very interesting times.”
The finish was reminiscent of last season’s T20 Blast final in England where Nathan Ellis effectively won the game twice after a belated no-ball call from the final delivery.
Tags: Bangladesh, Bangladesh vs Zimbabwe, Blessing Muzarabani, ICC Men's T20 World Cup, Nurul Hasan, Sean Williams, Zimbabwe