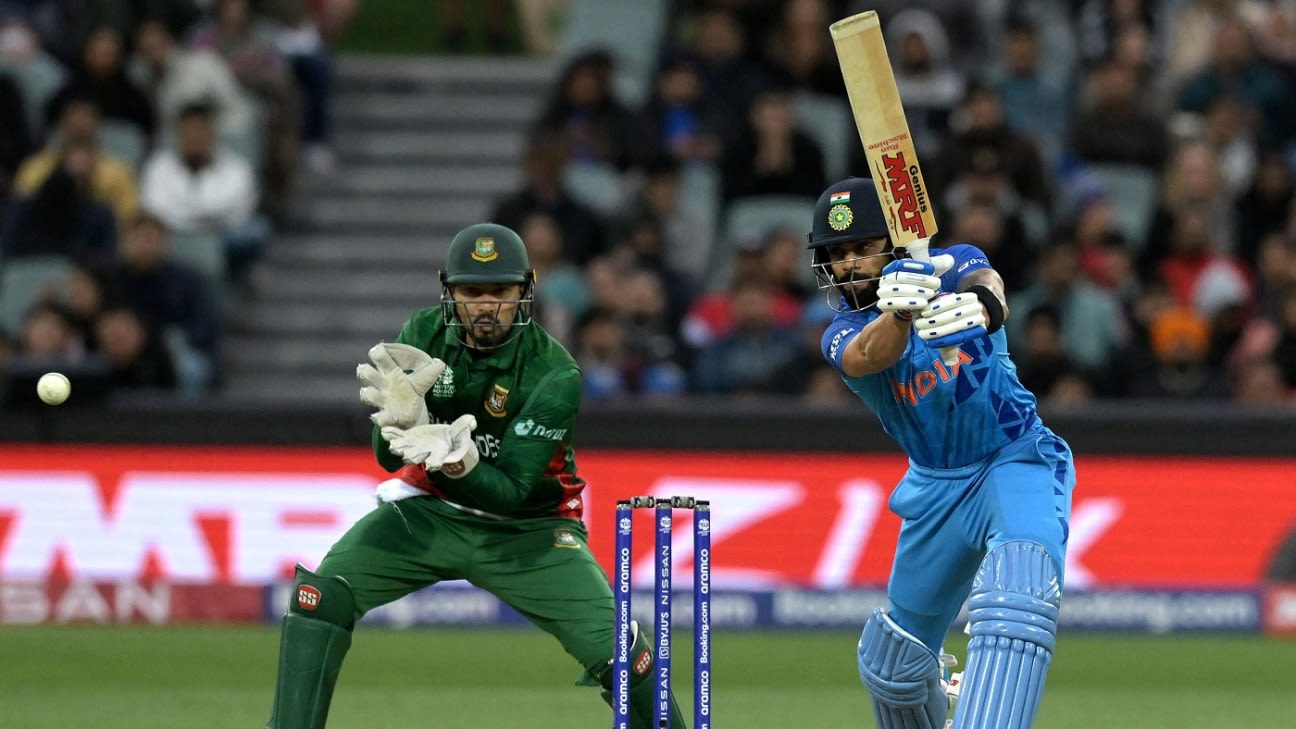 Virat Kohli has become the all-time leading run-scorer in men’s T20 World Cups, overtaking Mahela Jayawardene’s record of 1016 runs, which was set in 2014.
Kohli broke the record during India’s fourth group 2 game against Bangladesh in Adelaide, and he passed the milestone with an average of more than 80 and a strike rate of more than 130 in T20 World Cups. The run that took him past Jayawardene came off the 13th ball he faced on Wednesday, in the seventh over of India’s innings, when he flicked Taskin Ahmed to midwicket for a single.
Related
Playing in his fifth T20 World Cup, Kohli became the competition’s highest run-getter in only his 23rd innings, having scored 12 half-centuries. In comparison, Jayawardene had played 31 innings to set his record, though he faced fewer balls (754 balls) than Kohli did (773).
Kohli scored 185 runs in his maiden T20 World Cup in 2012; he was the competition’s top-scorer in 2014; and the second highest run-getter in 2016. Kohli was adjudged the Player of the Tournament in the 2014 and 2016 editions, making him the only male cricketer to win the award twice. His six Player-of-the-Match awards are also the most in the tournament’s history.
Kohli began the 2022 T20 World Cup on 845 runs and scored two consecutive unbeaten half-centuries – against Pakistan and Netherlands – before being dismissed for 12 against South Africa. Those performances took him past Tillakaratne Dilshan (897), Rohit Sharma (904) and Chris Gayle (965) into second position on the list of all-time run-scorers in the T20 World Cup, before he overtook Jayawardene during the game against Bangladesh.
Kohli also holds the record for being the highest run-scorer in all T20 internationals, and is ahead of Rohit, Martin Guptill, Babar Azam and Paul Stirling on the list. Kohli is approaching the 4000-run milestone in T20Is, and averages more than 50 with strike rate of nearly 140.
Tags: ICC Men's T20 World Cup, India, Virat Kohli