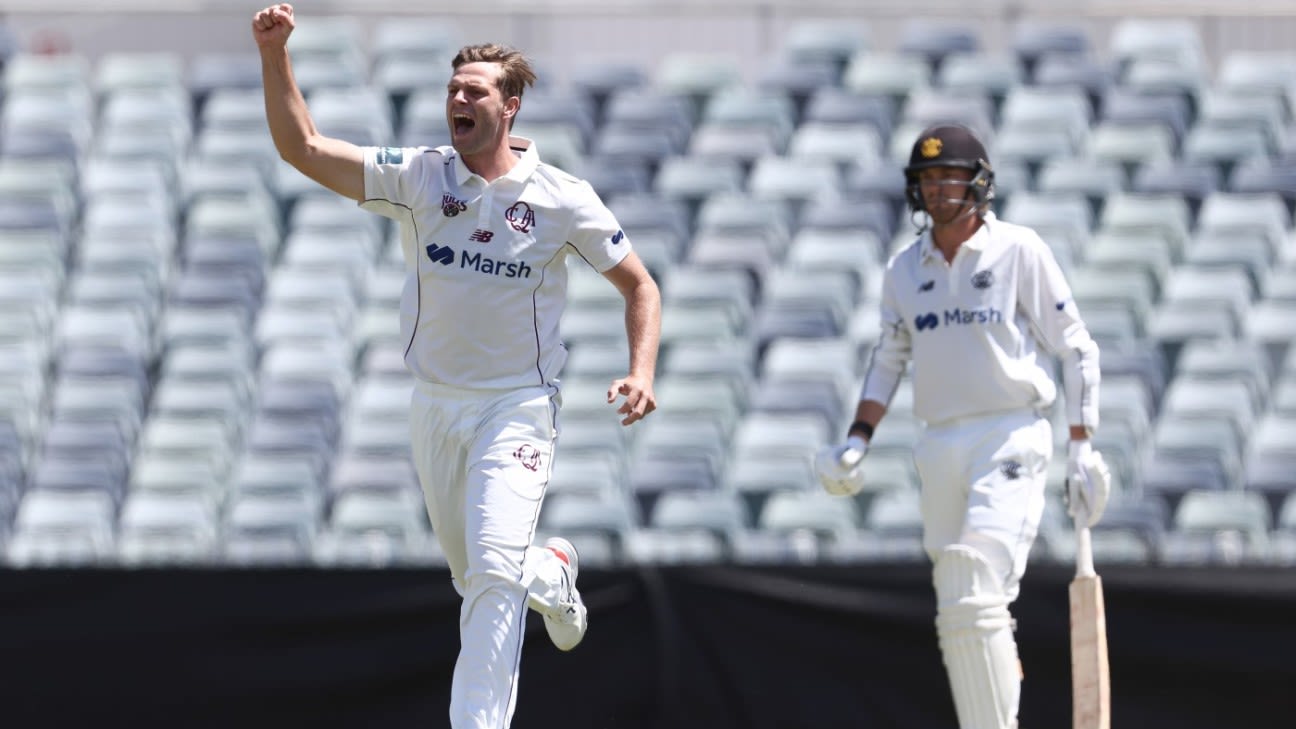 Western Australia 115 (Hardie 44, Steketee 6-38, Neser 2-32) & 1 for 6 need 188 more runs to beat Queensland 211 & 97 (Burns 31, Morris 4-26, Paris 3-15)
Queensland seamer Mark Steketee was almost unplayable on a green WACA pitch as he continued his strong start to the Sheffield Shield season, before Western Australia’s quicks engineered a stunning fightback as 20 wickets fell on day two of an enthralling low-scoring contest.
Steketee, a late addition to Australia’s Test squad to Pakistan earlier in the year, issued another reminder to national selectors with a six-wicket haul as Queensland dismissed WA for just 115 to gain a first-innings lead of 96. He has taken 16 wickets at 13.37 in three Shield matches this season.
But Queensland weren’t able to cement their advantage and were bundled out for just 97 in a dramatic last session with quicks Lance Morris and Joel Paris combining for seven wickets.
Having been dismissed just three hours earlier, WA’s chase of 194 started disastrously when opener Cameron Bancroft fell to seamer Michael Neser in the first over.
Though they claimed Bancroft just before stumps, Queensland were left frustrated after being in control following Steketee’s earlier heroics.
Even more bowler-friendly than nearby Optus Stadium, which hogged the local limelight the past week, the WACA’s seaming pitch was tailor-made for Steketee who tore through WA’s strong batting order during a destructive morning session.
He claimed Bancroft and 18-year-old sensation Teague Wyllie within three balls to leave WA reeling at 3 for 3. Steketee at one point had the remarkable figures of 5-9 from seven overs.
He combined brilliantly with Neser, who also relished the conditions, as WA slumped to 6 for 29 and were in real danger of posting their lowest-ever score on their home ground and overtaking the long-time record of 50 against New South Wales in 1950.
But allrounder Aaron Hardie and Paris combined for a 45-run partnership to ensure WA avoided the history books before Steketee and Neser finished off the innings to give Queensland a stranglehold of the contest.
WA’s quicks needed to respond and they did so after tea with Morris, arguably the quickest bowler in Australia, grabbing the key wickets of Marnus Labuschagne and Usman Khawaja in four balls.
He beat Labuschagne with sheer pace to trap him lbw before Khawaja nicked a fiery length delivery to second slip. While Morris produced the fireworks, left-arm quick Paris nagged away on a good length to finish with superb figures of 3 for 15 from 11 overs.
There was some concern over the fitness of quick Jhye Richardson, who starred on day one with four wickets, when he hobbled off the ground in the final session but he returned with two wickets, including ending Matthew Renshaw’s stubborn 72-ball resistance.
Western Australia’s fightback has thrown the match wide open with the only certainty being that it will finish on day three.
Tags: Mark Steketee, Queensland, Queensland vs West Aust, Sheffield Shield, Western Australia