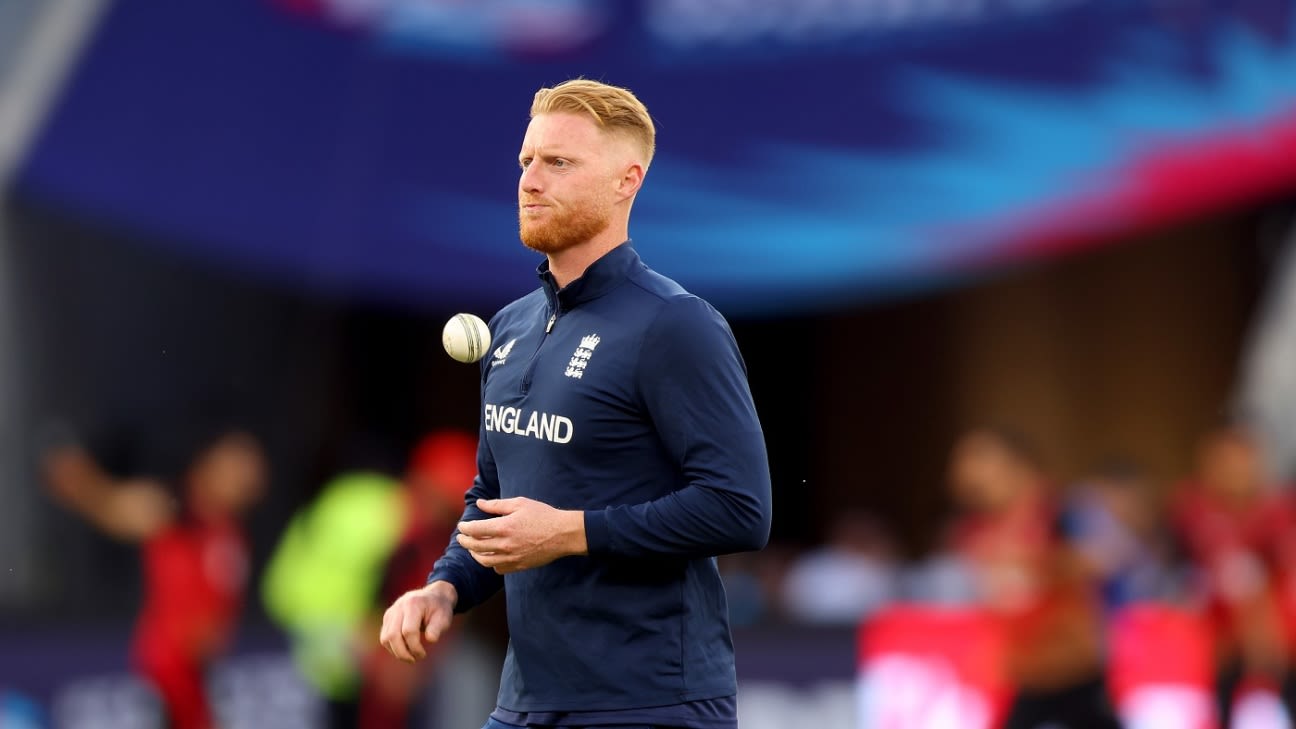 With England now virtually playing knockout cricket at the T20 World Cup, assistant coach Paul Collingwood has backed Ben Stokes to come the fore after an indifferent start to the tournament as questions linger about his position in the side.
Stokes made 2 off 4 balls against Afghanistan in Perth, and then was cleaned up by a wonderful delivery from Ireland’s Fionn Hand at the MCG for 6 off 8 as England fell to a shock defeat which left their tournament on a knife-edge.
Related
Stokes, who was rested from the seven-match series in Pakistan ahead of the World Cup, was unconvincing in the lead-in matches against Australia too, although he hit a quickfire 36 in the warm-up against Pakistan in Brisbane, the scene of their crunch game against New Zealand on Tuesday.
Overall, Stokes’ T20I record is comfortably the least impressive of the three formats. In 33 innings, he averages 18.57 with the bat and a strike-rate of 132.02 although he has rarely had a settled position or role in the team, which is one of the reasons he was given certainty by being locked in for the No. 4 job before this tournament.
Ben Stokes gears up to bowl at training•Getty Images
“I guess the one person that you want in your team when the pressure is on is Ben Stokes,” Collingwood said. “We all know what he’s capable of, and not just match-winning innings, but match-winning innings under serious amounts of pressure. I know well that if it comes down to the crunch that you want a man like Ben Stokes walking out.”
Stokes has been given a new role with the ball in this tournament, opening the attack to try and exploit early swing before returning later in the innings, and has claimed three wickets in the two games. He is also an asset in the field as he showed against Australia in Canberra with a stunning boundary-saving flick back.
“Not just what he gives with the bat, [it’s] the options with the ball, and the skill level he brings into the field as well.” Collingwood said. “It’s not always just the runs that he makes, but it’s everything else that he gives. But I’m pretty confident there’s an innings just around the corner, and now we’re coming into the crucial part of the World Cup, and it’s almost a knockout stage for us, it’s must-win games, you always see Ben come to the fore in those situations.”
For England to win, however, they need to get on the field and the forecast isn’t overly promising for Brisbane on Tuesday, although there is a chance that the worst of the rain could clear through earlier in the day. That won’t be much consolation for Afghanistan if they get their third washout in a row when they face Sri Lanka in the first game of the day. Shared points would not be curtains for England, but it would leave them needing favours elsewhere.
“In World Cups you want to see sides competing against each other, the best sides competing against each other in an equal game,” Collingwood said. “Hopefully tomorrow night the rain stays away and we can manage to do that.”
Tags: Ben Stokes, England, England vs New Zealand, ICC Men's T20 World Cup, Paul Collingwood