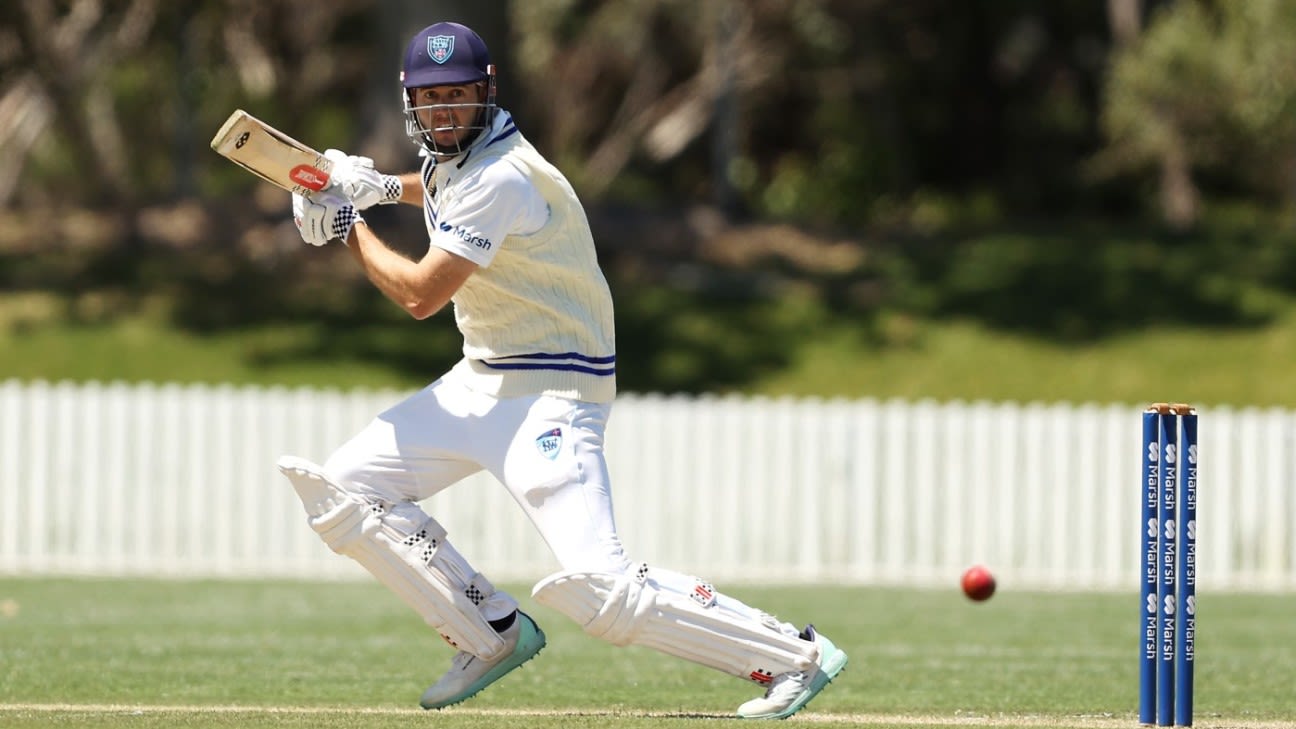 South Australia 1 for 15 (Lyon 1-5) trail New South Wales 5 for 389 dec (Patterson 122*, Hughes 91, Sangha 52) by 374 runs
Kurtis Patterson overcame a migraine to put his name back in lights with his first Sheffield Shield century in close to a year, helping NSW post 5 for 389 declared against South Australia.
After going to stumps at 32 not out on day one, Patterson stayed back in the sheds to sleep when play began on Tuesday morning as he battled a serious headache.
But after returning to the crease just after lunch, the 29-year-old showed no ill effects of the migraine as he blitzed his way to an unbeaten 122 on a flat wicket in Wollongong.
It helped give NSW the upper hand, before Nathan Lyon struck before stumps to claim Jake Weatherald’s wicket and leave South Australia 1 for 15.
Earlier, Patterson’s innings boosted a Blues counter-attack after the Redbacks claimed 3 for 22 at one stage in the middle session. Sean Abbott also scored 47 from 66 balls in response, helping NSW take full control of the match while Baxter Holt whacked an unbeaten 23 from 14.
But the star of the show was Patterson, whose innings shone through an 85-minute rain delay after tea. After playing two Tests for Australia in early 2019, the left-hander’s form for NSW fell away in recent summers.
However, he was back to his best in Wollongong, batting steadily between rain breaks on day one before cover-driving superbly and pulling the ball nicely on day two on Tuesday.
His final 52 runs came in 35 balls as he upped the ante before the declaration, driving Ben Manenti for four to bring up his ton and later hitting Brendan Doggett for two big sixes on the legside.
The unbeaten century came after Daniel Hughes missed out on breaking his own Shield drought. The 33-year-old had battled through a short-pitched attack from South Australia and at one stage upper-cut Wes Agar for four just before lunch.
But he fell short of his first century in more than two-and-a-half years when he went back to a bouncer from Agar and pushed it straight to short leg to be caught for 91.
Jason Sangha also went for a well-made 52 post the lunch break after forming a 115-run stand with Hughes.
Tags: Daniel Hughes, Kurtis Patterson, New South Wales, NSW vs South Aust, Sheffield Shield, South Australia