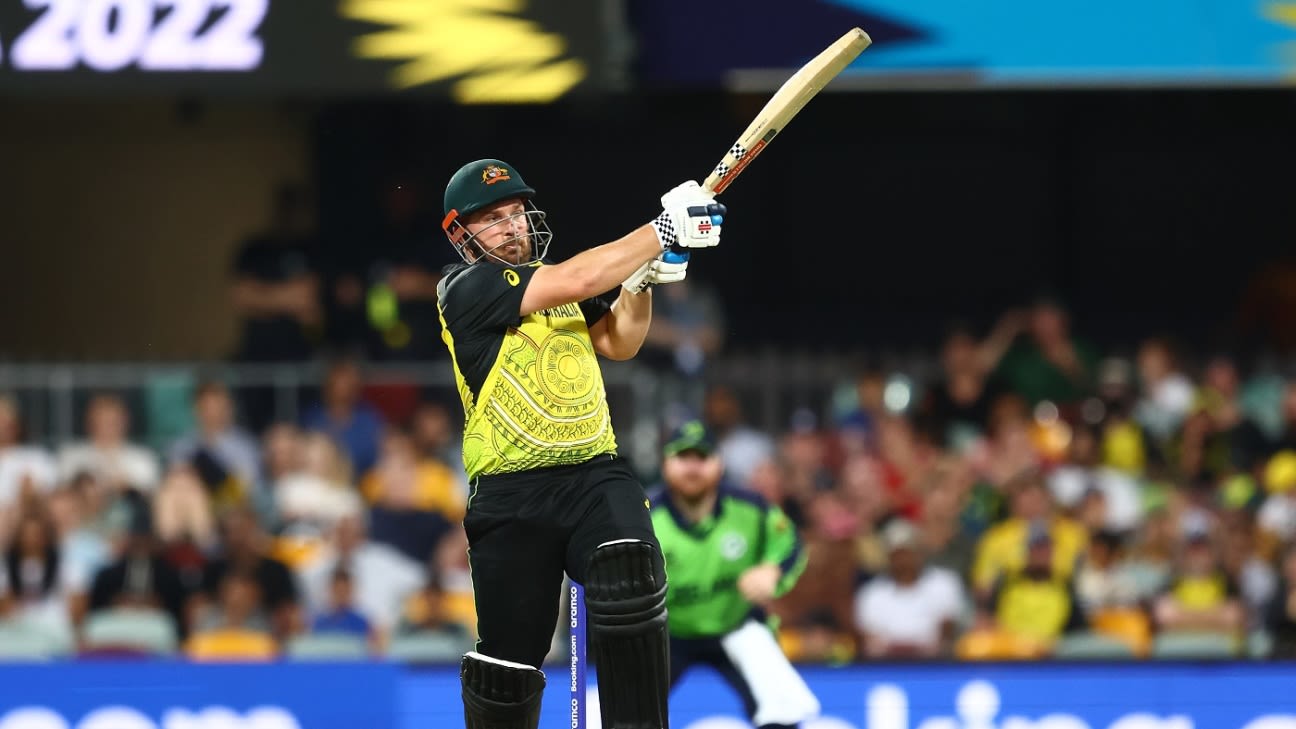 Australia 179 for 5 (Finch 63, McCarthy 3-29) beat Ireland 137 (Tucker 71*, Maxwell 2-14) by 42 runs
The margin of victory will suggest the defending champions have got their campaign back on track. But it was a less-than-perfect performance from Australia as they beat Ireland by 42 runs to join New Zealand on five points at the top of Group 1. Their net-run rate remains below England’s, which could come into play when semi-final spots are decided.
After being asked to bat, Australia recovered from a slow start thanks to a half-century stand between Aaron Finch and Mitchell Marsh. But Ireland made regular incisions and Australia only brought up their 100 in the 14th over. It was then that Marcus Stoinis and Finch lashed out, against a hapless Mark Adair, whose third over cost 26 runs, to put Australia within sight of 200. The pair shared 70 runs for the fourth wicket before Ireland hauled them back at the death to keep them under 180.
Importantly for Australia, Finch notched up his highest score in T20Is since March 2021 and highest in T20 World Cups since 2014. But he injured his hamstring in the process and was off the field from the seventh over of Ireland’s reply. Tim David and Stoinis also picked up niggles, and there will be concerns about how quickly they will heal up. Australia’s next match is in four days’ time, against Afghanistan.
In Finch’s absence, Matthew Wade marshalled an attack which was outstanding upfront but took their foot off the gas later on. Ireland were 25 for 5 before Lorcan Tucker and Gareth Delany got together for a sixth-wicket stand of 43. Tucker ensured Ireland were not dismissed for any record-lows or bowled out for 104 or less (which would have put Australia’s net run-rate higher than England’s). He scored his fifth T20I half-century and was eventually stranded on 71*. Ireland’s semi-final hopes are slim. They have one match left to play, against New Zealand on Friday.
Australia’s scratchy start
Australia were slow off the blocks against a disciplined effort from Ireland and took 14 balls before finding their first boundary. David Warner was tentative up front, followed a Josh Little delivery down leg but did not connect, slashed at an Adair full toss but only got it as far as cover and then pulled Barry McCarthy straight to short fine leg to depart for 3. He is yet to get going in this tournament, with 19 runs from three innings so far. Australia were 14 for 1 after three overs and added 24 runs in the next three overs to end the powerplay on 38 for 1 before Marsh smoked two sixes off Fionn Hand. Marsh was looking good but then didn’t move his feet when he tried to cut McCarthy and edged it behind. The Finch-Marsh partnership was worth 52 off six overs and laid a foundation for another strong stand later in the innings.
Aaron Finch goes big•ICC via Getty Images
Adair’s awful over
Ireland had mostly kept a lid on Australia, with the run-rate below eight an over until the end of the 14th. And then things went awry. When Adair stepped up to bowl the 15th, Finch and Stoinis tucked in. Stoinis slammed a drive down the ground off Adair’s first ball, then lofted him to long-on – where McCarthy pulled off a great save – and then pulled Adair through short fine. Under pressure, Adair went on to deliver three successive wides before adjusting to back of a length, which Finch pulled for four. He finished with a full toss which Finch deposited over deep backward square to bring up his first T20I fifty of this tournament. In total, Adair bowled 11 balls in that over and conceded 26 runs.
Little goes big
There’s plenty of hype around left-armer Little, who will play in the SA20 in the southern hemisphere. He put in another impressive showing against high-profile opposition. He started with two tight overs of mostly hard lengths in the powerplay and then struck in the middle and at the death to ensure Australia did not completely run away from Ireland. After his opening burst, Little was brought back for the 11th over where he set up Glenn Maxwell and removed him for 13. Australia were 84 for 3 and not progressing as smoothly as they may have hoped. He delivered the penultimate over, removing Stoinis and conceding only four runs to finish with 2 for 21 – Ireland’s most economical on the night.
Australia on the attack
Ireland got away with one when Josh Hazlewood flicked Andy Balbirnie’s offstump but the bails did not fall. But that was as lucky as they got. In the next over, Balbirne shuffled across his stumps to flick Pat Cummins through fine leg only to be bowled. Two balls later, Paul Stirling toe-ended Glenn Maxwell to mid-off. At the end of that over, Maxwell got Tector to pull one straight to square leg. There was no let up at the other end, where Starc replaced Cummins and blew the Irish middle-order away. He bowled Curtis Campher and George Dockrell with almost identical deliveries that swung into them and beat the edge. Ireland were 25 for 5 inside four overs and chances of another upset had all but evaporated.
Tucker shines alone
Throughout the tournament, Balbirnie has referred to Tucker as the batter who will lead Ireland’s line-up into the future and, with his team in disarray, he showed why. He hit Cummins over mid-on for four, two balls after the fifth wicket fell. He was similarly dismissive of Starc and picked up on any small errors in length. Overpitched on the pads? Tucker flicked. Back of a length? He pulled. He took 11 runs off Starc’s third over and 16 off this fourth and got more adventurous as his innings went on. Tucker scooped Starc over Wade, lofted him over the infield and then over mid-off and in total scored 35 runs off the 18 balls Starc bowled to him.
Tags: Australia, Australia vs Ireland, ICC Men's T20 World Cup, Ireland