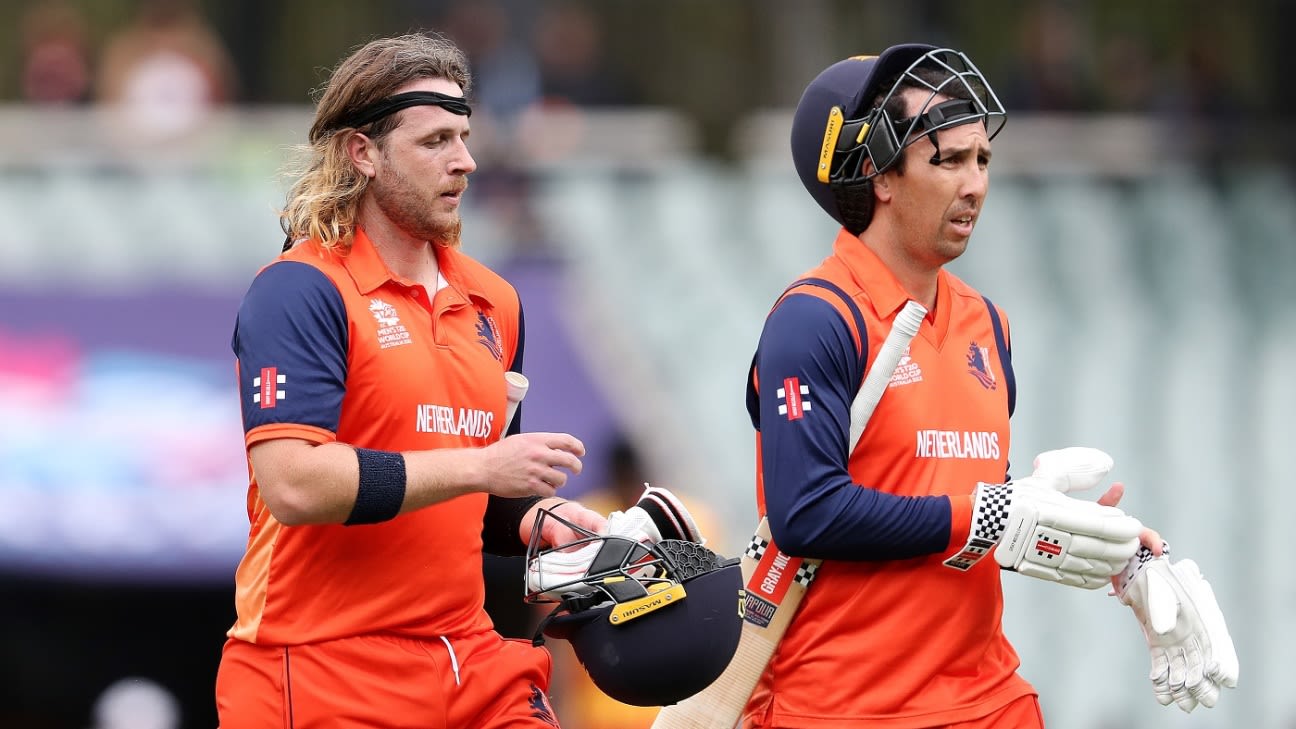 Netherlands 120 for 5 (O’Dowd 52, Cooper 32, Ngarava 2-18, Muzarabani 2-23) beat Zimbabwe 117 (Raza 40, van Meekeren 3-29, de Leede 2-14) by five wickets
Firsts are often memorable occasions and Netherlands ensured that they would only have fond memories of their maiden T20I at the Adelaide Oval. Their batting mainstay Max O’Dowd exuded calmness to help them through a small run-chase against Zimbabwe with a steady 52-run knock to all but end their hopes of making the semi-finals. This was after a fine seam-bowling performance from Netherlands – led by Paul van Meekeren’s three-for – helped skittle Zimbabwe for 117.
Only Sikandar Raza stood tall yet again for Zimbabwe as their batters failed to counter accurate fast bowling and fell prey to clever changes of pace that they bowled. In response, O’Dowd and Tom Cooper stitched together a 73-run partnership which ensured Netherlands did not lose early wickets in clusters.
While Zimbabwe mathematically still cling on, any result in the India-Bangladesh contest will knock them out.
Seam, swing and all that
The two colours that generally make for good viewing were on display at the Adelaide Oval – blue, sunny skies after a rainy build-up and an even covering of green grass on the surface. But Zimbabwe captain Craig Ervine had little hesitation in batting first even as his opposite number seemed content with what they had to do. You could see why.
A left-arm bowler swung it into the right-hander (away from the left-hander). Then a right-arm seamer did the opposite. After Fred Klaassen came perilously close to nicking Ervine off in the opening over, van Meekeren drew first blood in the next. He began with a misdirected inswinger to the left-handed Ervine before castling Madhevere with a peach. Madhevere was rooted to the crease expecting an outswinger but instead received a full and straight ball on middle, which he missed a belated flick off to be bowled.
It was then time for Brandon Glover to come to party. He began with five straight dots, which led to Ervine top-edge an attempted flick with Scott Edwards completing a well-judged catch. In his next over, Glover saw Regis Chakabva survive two chances – one when Bas de Leede failed to cling on to a cut at backward point and then on the very next ball when Edwards grassed a regulation diving catch.
But, much like Madhevere, Chakabva lost the mind game against Glover as he was stuck to his crease expecting another one outside off, only to be trapped in front by a full and straight one in line of the stumps. Zimbabwe were reduced to 20 for 3 inside the powerplay, as a result.
Sikandar Raza top-scored with a 24-ball 40 for Zimbabwe•ICC via Getty Images
Raza, again
It was yet again up to Raza to rescue Zimbabwe, for the umpteenth time in recent games. He was starved of strike for two overs upon his entry before he got going of a 14-run over off Glover. He targeted the short, square region on the leg side to pepper his pull strokes and used his might to smoke generally un-hittable length balls over the bowler’s head. He found an ally in Sean Williams, who played a steady hand in their 48-run partnership.
Even after Williams fell, Raza did not slow down. He smoked two more sixes – the second off Glover (again) made a sound you’d want to use for one of your phone alerts. In all, Raza scored 26 off the 11 balls he faced from Glover, after the bowler had two wickets – including a wicket-maiden – and had conceded just two runs from his first two overs.
But once Raza fell trying to take on the longer long-on boundary off Bas de Leede – back after he was replaced in the match against Pakistan due to concussion – Zimbabwe lost their last five wickets for 25 to fold for 117.
O’Dowd denies Zimbabwe
O’Dowd enhanced his batting credentials in this men’s T20 World Cup with his second half-century in the competition. It was not all smooth-flowing for him though. Even though he managed to hit a four in each of Tendai Chatara’s three overs in the powerplay, he could only score 14 off the 18 balls he faced in the phase. He was regularly beaten on the outside edge, courtesy Chatara’s outswingers, and it was almost like the phase was being played on repeat.
It was only when he picked up a Richard Ngarava slower delivery early after the powerplay and then followed it with a gorgeous inside-out six over extra cover off Sean Williams that he had truly announced himself. By that time, Cooper, who perhaps knows the Adelaide Oval conditions like the back of his hand thanks to his stints in Australian domestic circuit, had got into a roll and his alliance with O’Dowd had all but sealed the deal for Netherlands.
Even though Zimbabwe managed to pick up four wickets for 26 with Cooper’s fall, a total of just 117 was never really going to be enough.
Tags: ICC Men's T20 World Cup, Max O'Dowd, Netherlands, Paul van Meekeren, Sikandar Raza, Zimbabwe, Zimbabwe vs Netherlands