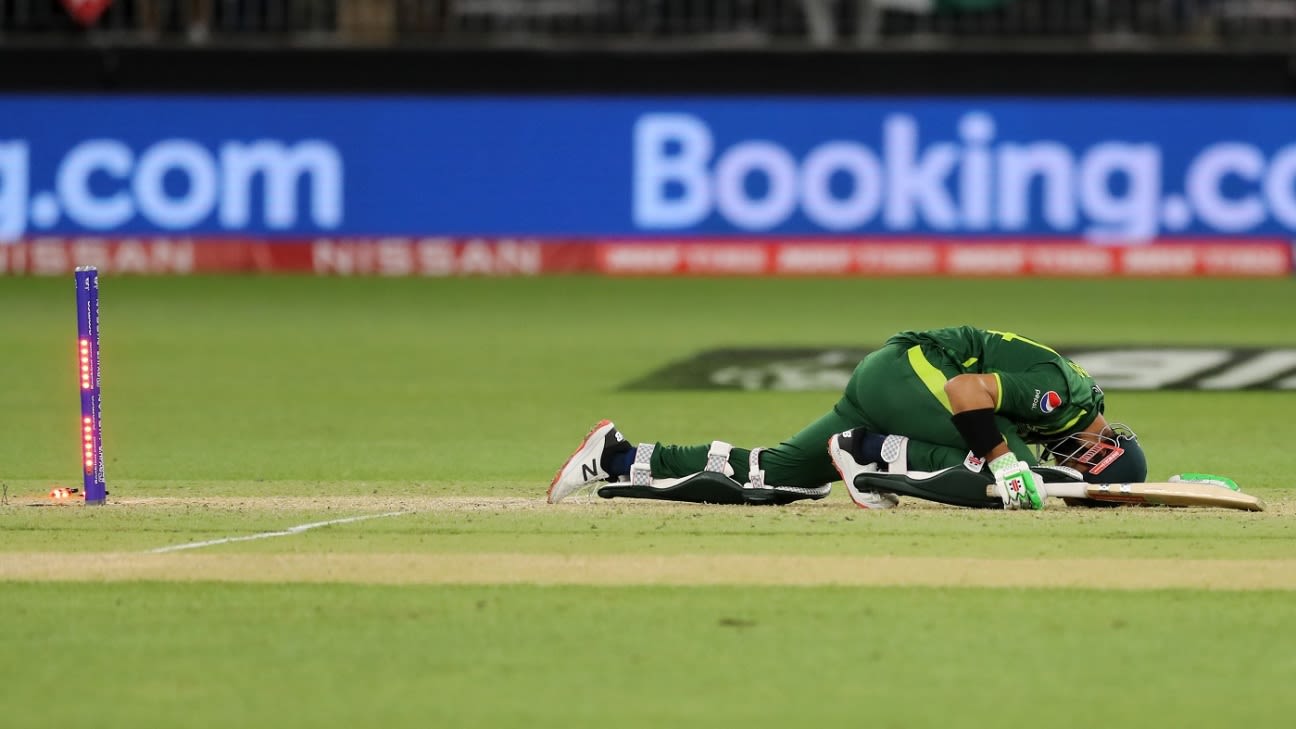 Pakistan captain Babar Azam conceded his team was “not up to the mark”, but backed the selection gamble to field a bowling heavy line-up after their T20 World Cup semi-final prospects nosedived with a one-run defeat to Zimbabwe at Optus Stadium in Perth.
Just four days after a harrowing last-ball defeat to India at a packed MCG, Pakistan suffered more heartbreak after they were stunned by Zimbabwe having dominated the match for large periods on a fast and bouncy pitch expected to suit them.
“Today, we are not up to the mark in all three departments,” Babar told reporters at his post-match press conference. “It’s very hard as a team and as a captain.”
Enticed by a green-tinged Optus Stadium pitch, where ball had mostly dominated bat in the previous two matches, Pakistan decided to strengthen their pace attack with the inclusion of quick Mohammad Wasim at the expense of batter Asif Ali.
Shan Masood is distraught after being stumped during Pakistan’s collapse•ICC/Getty Images
After restricting Zimbabwe to a modest 129 for 8, it appeared a masterstroke with a fiery Wasim starring with 4 for 24, including the key wicket of Sikandar Raza followed by expert death bowling, but Pakistan’s weakened middle-order fell apart under pressure.
“I don’t think so,” Babar said, when asked if the strategy to go in with an extra bowler had ultimately backfired. “This pitch required fast bowlers, so we had that in the planning and that’s why we had an extra fast bowler.”
Related
Pakistan’s second consecutive last-ball defeat has put them on the brink of an early exit and ensured a must-win contest against the Netherlands, who are also winless, on Sunday again in Perth.
Babar, who gave his team a rallying cry after the defeat against India in a video that has since gone viral, tried to remain confident of Pakistan’s chances as they once again face the challenge of rising up off the canvas.
“We have two days and we’ll have a sit together and discuss the mistakes,” he said. “We will come back stronger.”
Tags: Babar Azam, ICC Men's T20 World Cup, Mohammad Wasim, Pakistan, Zimbabwe vs Pakistan