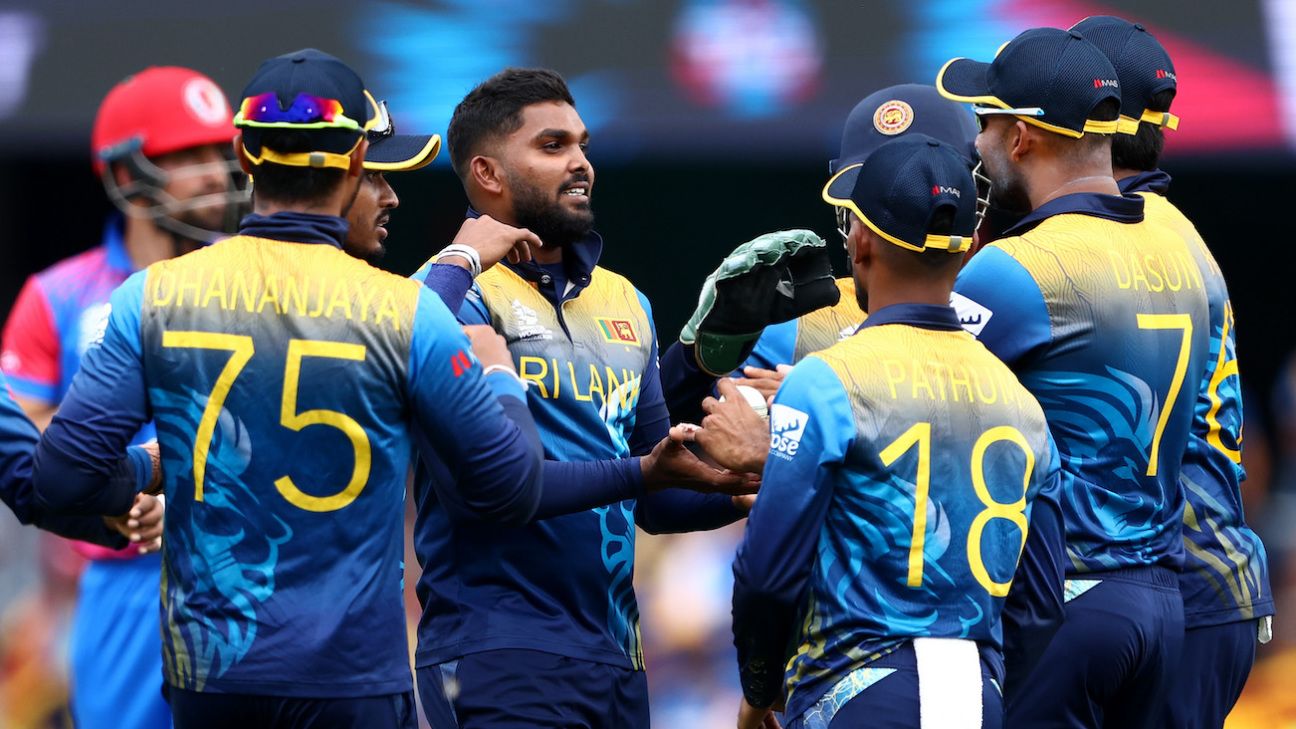 Sri Lanka 148 for 4 (Dhananjaya de Silva 66*, Mujeeb 2-24) beat Afghanistan 144 for 8 (Hasaranga 3-13) by six wickets
Sri Lanka kept a leash on Afghanistan’s innings, making frequent breakthroughs before partnerships could truly blossom, holding the run-rate in check. Led by Wanindu Hasaranga, whose outstanding 3 for 13 was most responsible for hindering the opposition, Sri Lanka conceded only 144 or 8 on a decent batting track.
There was an early wobble in Sri Lanka’s chase, when Pathum Nissanka was out for 12. And as the new ball swung, and Mujeeb Ur Rahman delivered excellent early overs, they could muster only 28 runs from the powerplay.
Dhananjaya de Silva waited patiently for opportunities, however. He built a slow partnership with Kusal Mendis first, ensuring that Sri Lanka did not hemorrhage top-order wickets as they had done in the two previous games. Then in the company of Charith Asalanka, and Bhanuka Rajapaksa, he began to produce sweetly-struck boundaries, before finishing with 66 not out off 44 – his best T20I score. Sri Lanka strolled home with nine balls to spare.
Only Rashid Khan and Mujeeb took wickets for Afghanistan, claiming two each. For them, the loss means they are out of reckoning for a semi-final spot. Sri Lanka’s hopes remain alive, though they are slim. They must not only beat England in their next game to have a chance, other results must also go their way.
Afghanistan’s solid start
Having flayed Sri Lanka in the Asia Cup, Rahmanullah Gurbaz seemed to be getting into his work again, particularly when he lofted Lahiru Kumara down the ground in the third over to hit the game’s first six. He was on 28 off 23 at the end of the powerplay, and Afghanistan had a platform, having made 42 for no loss. But first ball of the seventh over, Kumara nipped one back into Gurbaz, to knock back middle stump. And Afghanistan did not have a partnership that touched 30 for the rest of the innings.
Hasaranga’s masterclass
You wouldn’t think this was the guy who went at over 17 runs an over, just two matches ago. In this game, Hasaranga bowled the seventh, 11th, 14th, and final over of the innings, took three wickets, and did not concede a single boundary. He took special pleasure in bowling his opposite number – Rashid – with a googly in the 20th over, which brought Sri Lanka two wickets and cost only three runs. He was electric on the field, as usual.
Wanindu Hasaranga got rid of Usman Ghani, caught at deep midwicket•ICC via Getty
De Silva takes control
De Silva was two off seven at the end of the powerplay, then 12 off 15 later. But with only a modest total to chase, he did not panic, even when the required rate had crept to above eight at the halfway stage. In the 11th over, de Silva nailed a slog sweep off Rashid Khan for six, and this is when his own innings, and that of the team, switched into a higher gear. He hit 54 runs off the last 29 balls he faced, launching Mohammad Nabi for a six into the sight screen, cracking seamers over the covers, and sending the spinners legside. It was his partnership with Asalanka that really broke the game open for Sri Lanka. The pair made 54 off 34 together; de Silva hit 29 off 16.
Rashid’s bad day
In truth, Rashid bowled well, getting Kusal Mendis in his first over before having Asalanka caught at long-on in his third. One of the boundaries he conceded to de Silva was also the result of an inside edge. But by the end of his spell, Rashid was visibly frustrated at not having made a greater impact (his figures were 2 for 31), and then things got worse. As he slid to stop a ball on the boundary with Sri Lanka on the cusp of victory, his left knee got stuck in the Gabba’s soft turf. He had to be helped off the field, but later in the day the Afghanistan Cricket Board said in a tweet that he had “considerably improved” after having twisted his knee and “is expected to be fully fit soon”.
Tags: Afghanistan, Afghanistan vs Sri Lanka, Dhananjaya de Silva, ICC Men's T20 World Cup, Mujeeb Ur Rahman, Sri Lanka, Wanindu Hasaranga de Silva