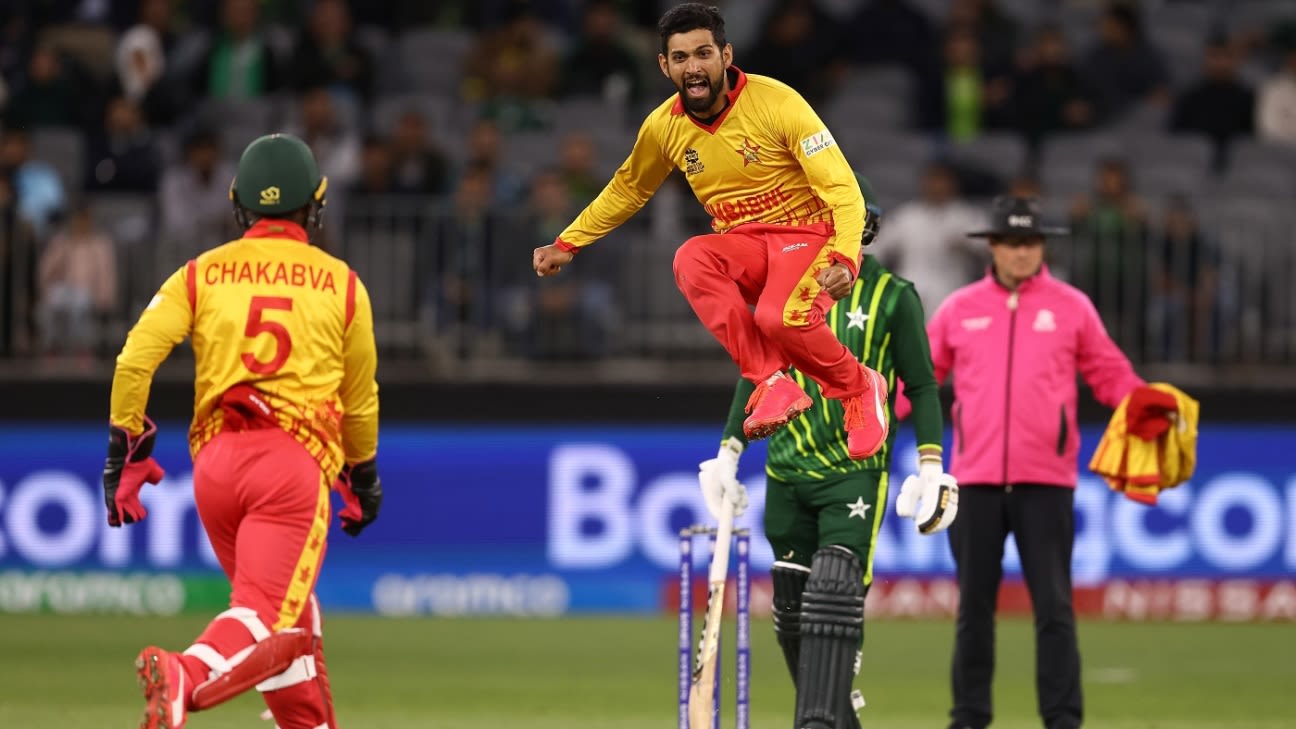 Zimbabwe allrounder Sikandar Raza has credited Ricky Ponting for giving him the “little push” he needed to put in another match-winning performance at the T20 World Cup.
After Zimbabwe stunned Pakistan by one run for their third win of the tournament, Raza revealed that when he struggled to sleep in the early hours of the day of the match against Pakistan, it was Ponting’s clip, which referred to greats of the game like Glenn McGrath and Shane Warne when discussing Raza’s form, that calmed him.
“I know there was a small clip that was sent to me this morning and it was Ricky Ponting having a small word,” Raza told the broadcasters immediately after Zimbabwe’s win. “I was excited. I was nervous. I was thrilled about today. Motivation was always there, but if I needed that little push, I thought that clip did a wonder this morning. So thank you very much to Ricky as well.
“..some of my friends and family members messaged and they said they had a kind of tear in the eye,” Raza said at the press conference after the match. “For me, I had goosebumps, one of the greats of this game talking about Zimbabwe and in particular me.
“Not that I needed an extra kick, but if I needed that, that clip did the job for me. I wanted to stay calm, but at the same time be pumped up for this game.”
In a glowing assessment of Raza’s year, in which he has won more Player-of-the-Match awards than anyone else – seven – Ponting praised the way Raza has embraced a senior role in the side and how he has been willing to face challenges head on.
“In the T20 game, because it’s such a moment-based game where it comes down to the result of one particular ball, the older, more experienced guys have a better way of thinking their way through situations, knowing exactly what’s required here and now and then going and doing it,” Ponting said in a clip released by the ICC. “I said about Sikandar Raza at the start – the maturity side, he just seems to know exactly what to do, when to do it and he has been good enough to get it done.

“At the age of 33 or 34, it’s not easy to get better and improve. But he’s found a way to improve whether it be 50-overs cricket or T20 cricket, probably under the most pressure that he’s ever been under in his life.”
Ricky Ponting on Sikandar Raza

“All the best players in the game that I’ve known, and across other sports as well, is when those big pressure moments come, that’s what they want. You know Shane Warne was a great example of that, Glenn McGrath was a great example of that. Those players, they want that big moment, they want that stage and when they get there, they’re not going to let it slip. They are gonna make the most of it and make sure they get the job done. And that’s what’s Sikandar has done so beautifully.”
Raza has starred with both bat and ball for Zimbabwe in this T20 World Cup. After scoring 82 against Ireland in Zimbabwe’s opener in the first round, he picked up 3 for 19 against West Indies, followed by 40 runs and 1 for 20 against Scotland. Following his 3 for 25 against Pakistan, Raza said it was the best win he has ever been part of.
“I think since I’ve been part of Zimbabwe cricket, I would rate that the best victory we’ve had because there’s no better stage,” he said. “This is the World Cup, the biggest stage of all.
“To beat Pakistan by one run…the modest total. You’re going to have to do everything right to defend that, which we did. I think for me that’s probably the best victory I’ve been part of with Zimbabwe.”
Earlier in the tournament, Raza explained that he had to figure out a new way of bowling after surgery to remove a benign tumour from his shoulder left him unable to lift his arm but, on his return to the game, he still wanted to contribute in both disciplines. It’s that desire to keep learning that Ponting is particularly impressed by.
“At the age of 33 or 34, it’s not easy to get better and improve. But he’s found a way to improve whether it be 50-overs cricket or T20 cricket, probably under the most pressure that he’s ever been under in his life as far as the player is concerned,” Ponting said. “He’s 36 years of age, but he’s playing with a more youthful exuberance. Now it looks like he’s, you know, 26 again, he’s running around in the field and enjoying himself and leading from the front.”
Ponting’s praise is not the only thing Raza is going to finish the tournament with. He has already earned three watches off his captain Craig Ervine, and could add more to his name before the World Cup ends. “When we were coming to Australia, I said to my captain, ‘if you become Man of the Match, pick any watch from the catalogue and I’ll buy it for you, but if I become Man of the Match, you’re going to buy me one’,” Raza said, explaining why he demonstrated to his wrist when he was named Player of the Match on Thursday. “I was just reminding him that he now owes me three watches.”
Tags: ICC Men's T20 World Cup, Ricky Ponting, Sikandar Raza, Zimbabwe vs Pakistan