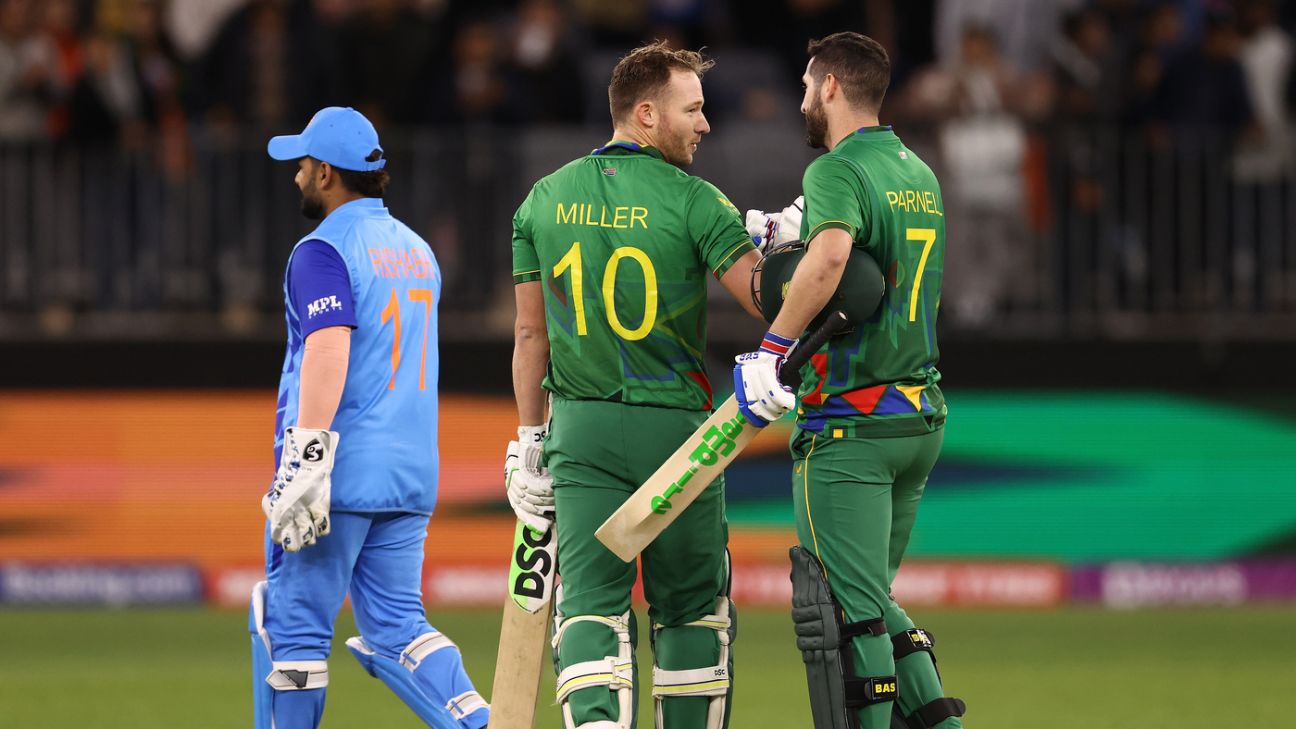 David Miller has never played a Test match. He probably never will. His last first-class game was in 2018. But for a few moments three days ago against India in Perth, it might have felt like one.
He walked in with South Africa 24 for 3 against a ball doing all sorts on a Perth Stadium pitch that had everyone, apart from probably the batters involved, marvelling at the pace and bounce. There can’t have been many times Miller has shouldered arms to the final ball of the powerplay as he did to Mohammed Shami.
Related
Although he escaped the menace of Bhuvneshwar Kumar and the brilliant Arshdeep Singh, at least until the contest was more in South Africa’s favour, he had to be on his guard against Shami and Hardik Pandya. It was his partner, Aiden Markram, who broke the shackles in the 11th over against Hardik and Miller then took down R Ashwin, not for the first time, to decide the contest having at one point been 16 off 25 balls.
“[There] was extra bounce and it was nipping around,” Miller said. “The guys were bowling extremely well. That’s where we needed to pick up the slack as a middle order. So we managed to get a really good partnership, Aiden and myself, and I suppose just the whole cliché is just one ball at a time and trying to stay in the moment as much as possible. It was difficult, so it was [about] just managing to try and think your way through it.
“I really struggled up front whereas Aiden was playing really well. So there was a lot of dot balls and you can get a bit edgy and try and just counterattack as such. I just try to slow myself down and realise that if I get through this period, the partnership is way more important than me just going out and giving my wicket away.”
His eventual tally of 59 off 46 balls continued an outstanding couple of years in T20Is for Miller. Since the start of 2021 he has averaged 55.46 with a strike rate of 158.81, shortly before this World Cup making an unbeaten 106 off 47 balls against India. His numbers in all the years before that, a T20I career that began in 2010, were an average of 29.35 and strike rate of 138.40.
Those figures make it slightly strange that he was not promoted to No. 4 against Bangladesh earlier in the tournament when South Africa were 170 for 1 in the 15th over, instead Tristan Stubbs was sent in and then Markram followed. Miller batted at No. 6 and only faced four balls. South Africa though went on to win by a huge margin and with Netherlands to play in this group, they are well-placed to qualify for the semi-finals even if they lose to Pakistan at the SCG. So that decision to hold Miller back is unlikely to make a difference, but his returns paint a picture of a batter you want to make the most of.
“It has been a good ride the last year, year and a half,” Miller said. “For me personally, I just try to draw back on past experiences. I feel like experience is a really valuable thing. For example in the previous game, we were in a little bit of trouble, a lot of pressure to win the game and it’s just about slowing the process down, understanding what is required right now.
“I feel like I’ve been in a lot of different situations in my career and it’s about making sure that you’re really in the moment and what’s required is probably the most important.”
Pakistan should provide another challenge at the SCG. The match will be played on the same surface as the New Zealand-Sri Lanka game which was tricky for batters who weren’t called Glenn Phillips. Shaheen Afridi (even if not quite at his best), Haris Rauf and Naseem Shah are a pace trio capable of causing plenty of problems, while Shadab Khan’s legspin could have a big role on a pitch where the Sri Lanka spinners found some grip early on.
With Quinton de Kock and Rilee Rossouw having dominated at the top against Bangladesh, Miller and Markram coming to the fore against India, an enviable pace attack and depth in the spin ranks as well, this South Africa team looks to be one with all bases covered. Only the not-insignificant issue of Temba Bavuma’s form hangs over them.
“We are finding lots of ways to win,” Miller said. “We’ve done it over a period of time now. I’d say probably the last year, we’ve found ourselves in tricky situations and managed to get over the line.
“I think the continuity of the squad over time, guys have managed to find their roles and if one guy isn’t doing well, another guy picks up the slack. It’s difficult to be successful in this format, as there’s a lot of different kind of variables, but we’ve managed to do well and play as a team.”
Tags: David Miller, ICC Men's T20 World Cup, Pakistan, Pakistan vs South Africa, South Africa