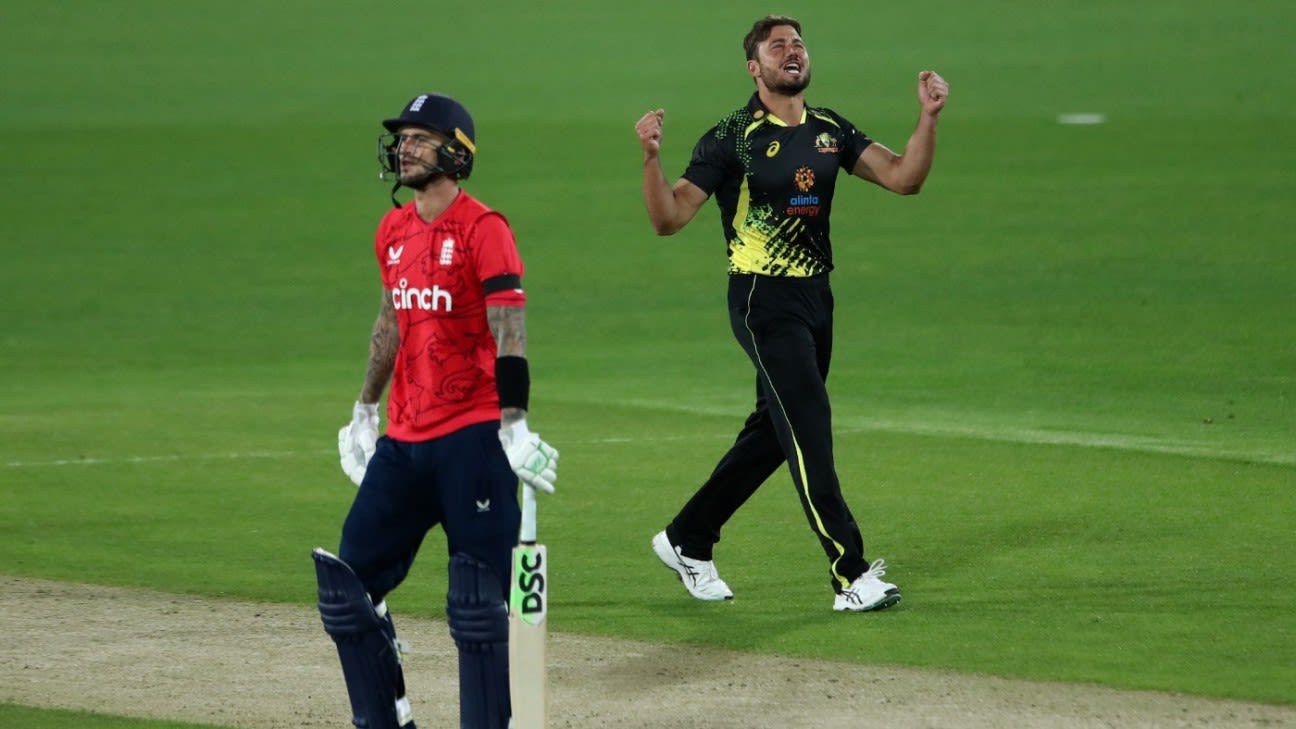 Five days on from one of the most captivating tussles ever witnessed at the Grand Old G, another of international cricket’s most storied rivalries takes to its oldest stage for a contest laced with a different flavour of existential jeopardy. Whereas India versus Pakistan was a clash of geopolitical magnitude, in both hype and denouement, England versus Australia offers a more fundamental sporting showdown.
To the winner, the prospect of a tournament lifeline, a chance to keep a route to the semi-finals in their own hands. To the loser, the mounting prospect of an early elimination: an ignominious fate for the holders of each of the ICC’s two World Cup trophies. Even allowing for the threat of further rain-related twists, two spluttering campaigns require some urgent ignition if they are to recover the ground so far lost – in Australia’s case to a crushingly one-sided loss in their opening match against New Zealand, and in England’s, an oddly meek surrender in the showers against Ireland at this same venue.
Related
For their part, Australia will hope that that ignition has already happened. At the moment of Glenn Maxwell’s dismissal in the 13th over of their 158-run chase against Sri Lanka on Wednesday, they were a side without direction, as their NRR began to drift towards double figures with Aaron Finch stuck and stodgy in what he later admitted was an “unusual” knock of 31 not out from 42 balls. But then up popped Marcus Stoinis with a devastatingly straightforward bout of range-hitting – and by the time he’d blazed an Australia-record 17-ball fifty, all those doubts had been dispatched to the stands.
Stoinis struck six sixes in his 18-ball stay against Sri Lanka – more than all his team-mates combined had produced in either of Australia’s first two matches of the tournament, but moreover, three times as many as England have produced in total against Group 1’s supposed lesser lights, Afghanistan and Ireland. Alex Hales lumped Fazalhaq Farooqi over long-on in Perth, Moeen Ali tonked Gareth Delany in the same direction at Melbourne, three balls before the rain sealed England’s fate against the Irish … and that, so far, has been that.
It’s a baffling moment for Jos Buttler’s team to come over all gun-shy, especially given the free-spirited mayhem that they seemed to be unleashing in their warm-up week on these shores. Australia themselves encountered the full weight of England’s power-hitting in conceding 208 for 6 in Perth at the start of the month, while Liam Livingstone’s six – clean out of the Gabba in their practice match against Pakistan – was widely perceived as a statement of intent from a deep and formidable batting line-up that has not been renowned for dying wondering in recent years.
Moeen Ali has hit one of only two sixes from England in this campaign•Getty Images
But what we have here instead is an unexpectedly cagey state of affairs. To a greater or lesser degree, both England’s and Australia’s batting has struggled for that fluid faith in its constituent parts that epitomised their recent glory days. Buttler’s rare first-over dismissal against Ireland can probably be written off as an aberration, but with his sidekick Hales so far failing to repay the faith in his recall, and Ben Stokes at No. 4 a very high-profile work-in-progress, the uncertainty has been contagious.
Dawid Malan has reverted to his old anchor-man habits, with 53 runs from 67 balls to date, and though Moeen did his utmost to tilt the DLS calculations in England’s favour as the rain closed in against Ireland, the inflexibility of England’s batting order was revealing. Eoin Morgan, you sense, would not have shied away from promoting his heavy artillery in a bid to get ahead of the rate in tough conditions, even if it had meant risking being all out for 80 in the process. Buttler’s subsequent statement that ‘England should let it hurt’ was perhaps a tacit admission that their campaign has not yet found the right levels of emotional investment.
Nowithstanding Stoinis’s exploits, Australia aren’t exactly in their happy place either. But for rain in Canberra, England would have thumped them 3-0 in the recent T20I series – their consecutive eight-run wins were more comprehensive than the final margins suggested – while their camp has been dogged by the spectre of Covid-19 in recent days, with Adam Zampa missing the Sri Lanka match and Matthew Wade now under the weather too.
An early exit for the defending champions on home soil wouldn’t be unprecedented for Australia – the same happened in 50-over cricket when they hosted the 1992 World Cup – but it would be deeply galling all the same. Their survival may require a knock-out blow against their oldest foes, and vice versa. But for the victor, who knows what a fillip to their spluttering campaign such a scalp would be.
Marcus Stoinis, playing at his Western Australia homeground, was the star of the show in the last game•Getty Images

Five matches (and a warm-up knockabout) into his T20I comeback, and there’s still no real clarity on where Ben Stokes‘ short-form game is at. A haul of 41 runs at 10.25 from 42 balls speaks of a player still trying to get his eye back in, which – in the context of this must-win game – isn’t the ideal tempo for your pivotal No .4. And yet, Stokes’ many strings are manifesting themselves in other ways in the tournament so far – most notably in his unexpected but very effective role as a new-ball option. A haul of 3 for 27 in 6.2 overs is mitigated by the fact that the first (and seventh) overs are the most favourable for bowling, given that batters tend to take a moment to gauge the conditions before going hell for leather. Nevertheless, he’s extracted some prodigious swing in that period, and brought his force of personality to bear in a manner that has so far been absent from his batting. At some stage, you sense his all-round game will click back into place again, but can England afford to wait for inspiration to strike?
Much of the same could be said for Australia’s own No. 4, Glenn Maxwell. Patience has been worn thin in recent weeks, in which Maxwell has ground his gears in a bid for some traction but to little avail. And yet, in consecutive games against New Zealand and Sri Lanka, he’s just about threatened to poke his head out the other side. Scores of 28 from 20 and 23 from 12 are hardly proof of his renewed threat. But in each game he scored as many boundaries (four) as he had managed in nine completed innings since June, and against Sri Lanka in particular, he provided the spark that Australia’s chase desperately needed ahead of Stoinis’s rampant finish. Like Stokes, his value extends beyond the runs he offers too. The timely wicket of Dasun Shanaka in his only over on Wednesday was a key factor in cramping Sri Lanka’s ambitions.

Hindsight suggests that England might have preferred to rest their trump card, Mark Wood, for the Ireland match, given the 48-hour turnaround between these two games, and the fact that another thrillingly high-octane display could not deliver the victory his team craved. The indications from head coach, Matthew Mott, however, are that England will field an unchanged XI – meaning Chris Woakes will get another outing in his return from long-term injury, and Hales will be trusted once again at the top of the order despite Phil Salt’s claims to a starting berth.
England (probable): 1 Jos Buttler (capt & wk), 2 Alex Hales / Phil Salt, 3 Dawid Malan, 4 Ben Stokes, 5 Liam Livingstone, 6 Harry Brook, 7 Moeen Ali, 8 Sam Curran, 9 Chris Woakes, 10 Adil Rashid, 11 Mark Wood.
Mark Wood has been England’s trump card with the ball•Albert Perez/ICC/Getty Images
Zampa’s recovery from Covid means he’s likely to slot into the side in place of Ashton Agar, as Australia’s solitary change from their Sri Lanka line-up. Wade is set to keep his place behind the stumps in spite of his own Covid diagnosis.
Australia (probable): 1 Aaron Finch (capt), 2 David Warner, 3 Mitchell Marsh, 4 Glenn Maxwell, 5 Marcus Stoinis, 6 Tim David, 7 Matthew Wade (wk), 8 Mitchell Starc, 9 Pat Cummins, 10 Adam Zampa, 11 Josh Hazlewood.

The MCG’s surface proved zippy in the damp on Wednesday, and overall is a far cry from the range of stodgy drop-in pitches that had given cricket there a bad name in recent years. Either way, the decisive factor is threatening once again to come from overhead. More grim weather is in store, and this may be another case of shower-dodging and DLS bargaining.

“I don’t feel any more pressure than I ever have. The only pressure is the expectation you put on yourself.”
Australia’s captain, Aaron Finch, is unmoved by concerns about his form going into the England game.
“If you needed a game to get up for – a must-win game – England and Australia at the MCG is certainly one of those.”
Jos Buttler, England’s captain, believes his team will be gunning for the big occasion.
Tags: Australia, Australia vs England, England, ICC Men's T20 World Cup