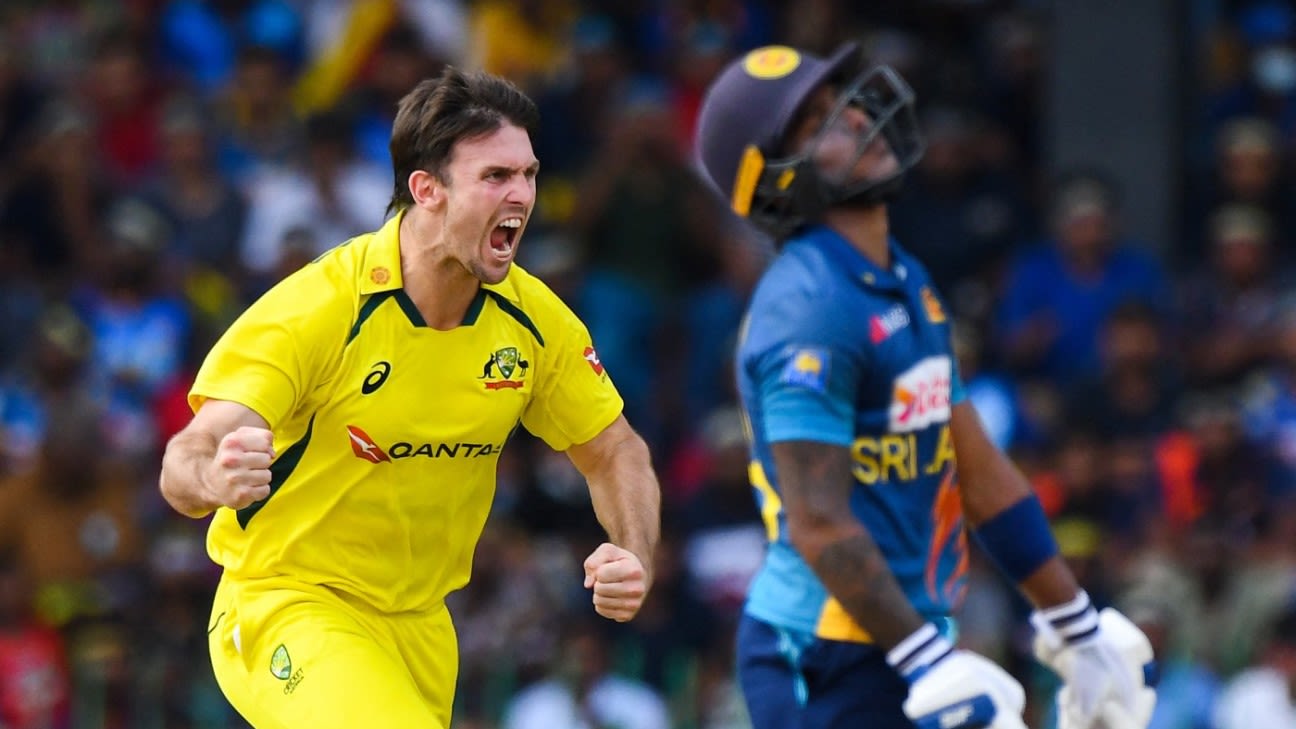 Allrounder Mitchell Marsh has declared himself fit to bowl in a much-needed confidence boost for Australia, whose T20 World Cup title defence is on the line against Sri Lanka at Optus Stadium on Tuesday.
While fellow favourites India and England started their campaigns with statement wins, albeit in contrasting fashion, hosts Australia are on the back foot after a thumping 89-run opening defeat to New Zealand at the SCG.
It has meant Australia’s net run rate is already an eyesore and winning their remaining four games might not be enough to get into the semi-finals given the cut-throat nature of the tournament.
Having finally recovered from a lingering ankle injury, Marsh should add much-needed versatility for an Australian attack still reeling from a pummeling by rampant openers Finn Allen and Devon Conway.
Related
He has not bowled since the Zimbabwe ODI series in August, playing as a specialist No. 3 batter in the lead up matches and against New Zealand.
“I’m available to bowl. I love preparing as an allrounder and making sure I’m in the game the whole time,” Marsh told reporters in Perth on Monday.
His seam bowling will provide another option for skipper Aaron Finch in the powerplay after Australia leaked 65 runs against New Zealand. To balance the attack, Finch prefers utilising an allrounder – either Marsh, Marcus Stoinis or offspinner Glenn Maxwell – in the opening six overs.
Against New Zealand, Stoinis, who himself had only recently returned from a side strain, conceded 10 runs in the fourth over as Finch only used five bowlers with Maxwell strangely overlooked on an SCG pitch that gripped as the game wore on.
“I think with me bowling, it gives us that added flexibility of myself, Maxi or Stoin can get four overs out. And we can bowl anywhere,” Marsh said.
After such a disastrous start to their title defence, question marks continue to hover over Australia with Steven Smith and young allrounder Cameron Green, who replaced the injury Josh Inglis, on the outside looking in.
Mitchell Marsh would be a valuable bowling option for Aaron Finch•AFP
But Australia are expected to back the same line-up, packed with big-hitters, as they attempt to lift off the canvas much like they spectacularly did 12 months ago in the UAE.
In the aftermath of Saturday’s defeat, spinner Adam Zampa said Marsh attempted an ice breaker in the team’s dejected changing rooms by saying: “Perfect, this is right where we wanted to be – backs against the wall”.
While a smiling Marsh doesn’t recall the quip, jokingly saying he was “thrown under the bus” by Zampa, he did believe it was an approach worth adopting.
“We don’t really have a choice,” he said. “The nature of the tournament…you lose one game, your back is up against the wall and we know what’s in front of us. It’s just really important to stick together.”
Even though Perth has experienced inclement weather in recent days, fortunately not impacting the tournament, there is no forecast for rain on Tuesday with the Optus Stadium pitch expected to again be bouncy and fast.
England speedster Mark Wood bowled the fastest spell recorded in T20Is during Saturday’s game against Afghanistan, whose batters consistently holed out on the deep square boundaries on a ground with the same dimensions as the MCG.
Marsh tipped Australia quicks Mitchell Starc, Pat Cummins and Josh Hazlewood to bowl rapidly. “We’ll certainly have an aggressive approach. We know that the three big bowlers when they get going, theý’re very hard to stop,” he said. I think certainly after the other night we’ll see a big response from them.”
Even though Optus Stadium, which essentially mimics the WACA’s iconic pitch, has characteristics perfectly suited for quicks, spinners can be effective in the middle overs by bowling back of a length, stymying batters on the vast square boundaries.
England’s high-octane batting order was tied down by Afghanistan’s spin-heavy attack as they made hard work of chasing 113, which they reached with 11 balls to spare.
After being stunned by Namibia in their opener in Geelong, Asia Cup champions Sri Lanka have steadily improved with three straight wins led by legspinner Wanindu Hasaranga who has taken nine wickets at an average of just 9.78 in the tournament.
“He’s obviously a very good bowler and someone we’ll have to counteract,” Marsh said of Hasaranga, who has taken 10 T20I wickets at 16.40 this year against Australia in five matches over two series in Australia and Sri Lanka.
“Hopefully spin doesn’t play a huge factor at Perth Stadium and we can really attack them [Sri Lanka’s spinners]. We play spin very well in Australian conditions.”
After Sri Lanka, Australia face England at the MCG which is still probably heaving after last night’s epic game between India and Pakistan.
England allrounder Sam Curran has lit fuel to the high stakes contest by saying he wants to put Australia in a “tricky position”.
Marsh, however, said Australia’s focus was solely on Sri Lanka. “That’s all that matters to us,” he said of the clash expected to attract around 25,000 fans to the 60,000-seat stadium.
“Hopefully we play well, get past that and then move on to England.”
Tags: Australia, Australia vs Sri Lanka, Glenn Maxwell, ICC Men's T20 World Cup, Mitchell Marsh, Sri Lanka, Wanindu Hasaranga de Silva