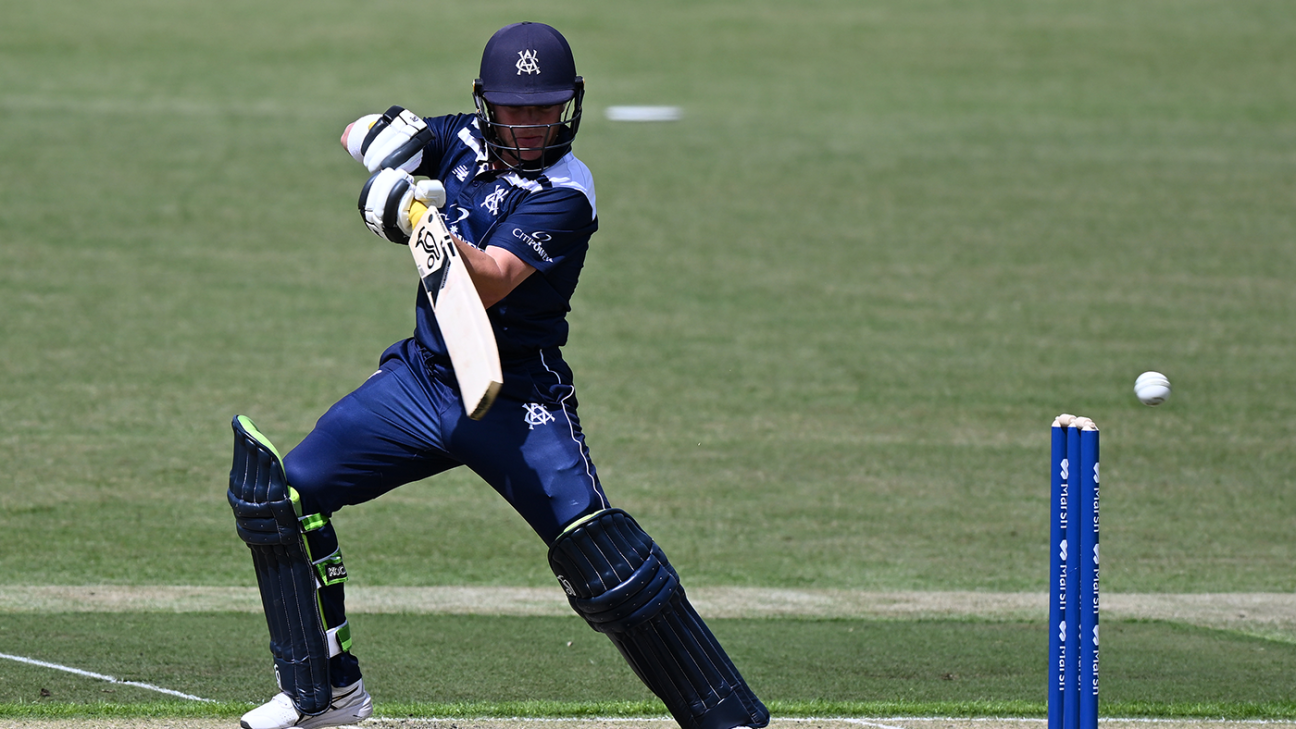 Victoria 7 for 265 (Harris 142*, Short 53) beat Tasmania 9 for 248 (Doran 104, Boland 3-38, Prestwidge 3-52) by 17 runs
Marcus Harris continued his strong form with his second century in a week lifting Victoria to a 17-run Marsh Cup win over Tasmania in Launceston.
Harris hit an unbeaten 142 on Wednesday – his highest 50-over score – as the visitors posted a challenging 7 for 265 in the first-ever men’s One-Day Cup match at the University of Tasmania Stadium.
Tasmania struggled at the outset under lights and, despite a late Jake Doran-led rally, were limited to 9 for 248. Doran cracked his second one-day century in five days, this time hitting 104.
Batting at No. 3, Harris displayed a wide variety of shots, including three sixes, for just his third century in 65 one-day outings.
Harris, who was dropped as David Warner’s partner after last summer’s fourth Ashes Test, hit 111 in the Sheffield Shield against Western Australia last week.
Missing hard-hitting batter Nic Maddinson due to a slight knee injury, Victoria rattled along at five an over until a middle-order collapse left Harris as the only recognised batter for the final 10 overs.
Newly minted opener Matt Short made it back-to-back half centuries with a quickfire 53 and skipper Peter Handscomb contributed 29 before Victoria lost 4 for 25.
Tasmania won the toss and elected to bowl first but there was little sign of the rain that has been sweeping across other parts of south-east Australia.
In reply, Doran was the lone shining light for Tasmania with his contribution comprising nearly half of Tasmania’s runs off the bat. The in-form Doran had yet to be dismissed in three previous one-day matches for Tasmania this season and has now totalled 245 runs in the campaign.
The 131-ball innings saw Doran complete back-to-back centuries having taken 21 matches to reach three figures for the first time. He scored his maiden 50-over century on the weekend against South Australia.
Scott Boland and consistent offspinner Todd Murphy put the brakes on Tasmania early on in their innings and the home side’s hopes seemed to have largely vanished at 4 for 91 by the midway mark of the innings.
Needing 95 off the final 10 overs, and then 45 off the final five, Doran and Tom Rogers briefly threatened to haul Tasmania back into the contest before Boland dismissed the latter for a well-made 28.
Tags: Jake Doran, Marcus Harris, Tasmania, The Marsh Cup, Victoria, Victoria vs Tasmania