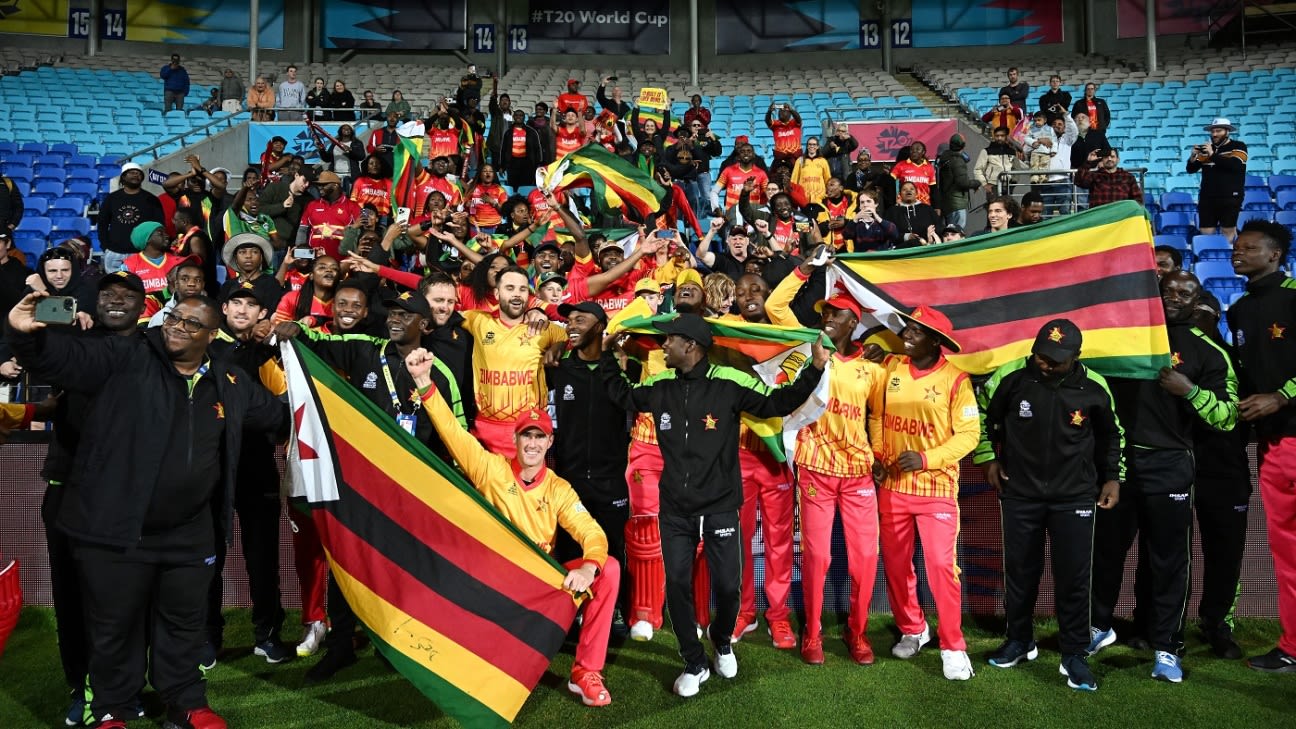 Zimbabwe 133 for 5 (Ervine 57, Raza 40, Davey 2-16) beat Scotland 132 for 6 (Munsey 54, Chatara 2-14, Ngarava 2-28) by five wickets
Zimbabwe had not played in a major ICC tournament in six years coming into this T20 World Cup, but they announced themselves as a team on the comeback trail as they marched into the Super 12s. Craig Ervine led with bat and in the field, as he anchored the Zimbabwean chase after managing his bowlers with pinpoint precision to keep Scotland to a gettable score, while Tendai Chatara and Sikandar Raza also made their experience count with telling contributions. This was only the 11th time in 55 attempts that Zimbabwe had won a T20I while chasing.
Asked to field first, Zimbabwe never allowed Scotland to get away from them. Chatara set the tone with a wicket in his first over and finished with figures of 2 for 14 in his four overs. He was well supported by Zimbabwe’s spin trio, who conceded only 46 runs in the eight overs they bowled. George Munsey’s half-century held Scotland together but their highest partnership was just 40 runs – for the third-wicket. Scotland also lacked the sort of turbocharged innings that Raza played to break the back of the chase.
Zimbabwe were nervy in reply and were 7 for 2 and 42 for 3 before Ervine and Raza put on 64 for the fourth wicket. Ervine dropped anchor and scored his sixth T20I fifty, and his first at a World Cup, and by the time he was dismissed in the 17th over, Zimbabwe were within touching distance of a win.
If Scotland sensed an opening when Ervine fell with 14 needed off the last three overs, Milton Shumba and Ryan Burl shut the door, rotating the strike calmly and finishing the job in just nine balls. Burl hit the winning runs in the 19th over when he lofted Safyaan Sharif over mid-on for four
Victory with more than an over remaining ensured Zimbabwe topped their group. They will join Group 2 in the Super12s, which includes their neighbours South Africa, India and Pakistan.
Holding on with both hands
Zimbabwe’s fielding has not always held up in pressure moments but they were committed to cause in this match. When Michael Jones sliced the last ball of Chatara’s opening over over cover, Raza ran back from the ring and took the catch over his shoulder as he tumbled onto the turf, to give Zimbabwe their first incision. Three overs later, Matthew Cross pulled a Richard Ngarava short ball in the direction of Wessly Madhevere at midwicket. Madhevere had to launch himself to his left and took the catch in full flight to leave Scotland 24 for 2 in the fifth over.
Later in the innings, Milton Shumba was down on his haunches to take a thigh-high catch off a slog-sweep to dismiss Richie Berrington and got low down on the boundary to take the catch that ended Munsey’s painstaking innings. And Luke Jongwe plucked a chance out of the sky in the final over to send back Calum MacLeod.
Sikandar Raza played a key role with ball and bat once again•ICC/Getty Images
Munsey muscles it…
Scotland were held together by Munsey, who struck seven fours in the first 22 balls he faced with an array of strokes around the wicket. Munsey brought out the flick and the pull, the cut, and three exquisite drives off the Zimbabwean seamers. He hit overpitched deliveries from Blessing Muzarabani through mid-off with power and then smoked Richard Ngarava past extra-cover.
… but Zimbabwe keep him quiet
After scoring 33 runs off his first 22 balls, Munsey scored only 21 runs off his next 29 as Zimbabwe’s bowlers squeezed through the middle overs and made it difficult for Scotland to get them away. Zimbabwe bowled nine boundary-less overs as Raza used the variations he has developed in tandem with Sean Williams’ left-arm spin and then Madhevere’s offspin. Chatara and Muzarabani, who were also used in that period, stuck to back-of-a-length balls that did not present any opportunities for big hitting. Between the eighth and 16th overs, Scotland scored only 48 runs.
Scotland make the perfect start
With a small total to defend, Scotland could not have asked for a better start, though Zimbabwe’s technique was to blame for their early losses. Regis Chakabva shuffled across and played down the wrong line to Brad Wheal’s third delivery and was given out lbw. He reviewed but ball-tracking showed the impact was in line and the ball would have gone on to clip the bails. In the next over, Madhevere was presented with a juicy half-volley but swung hard with no footwork and played onto his own stumps. Zimbabwe were 7 for 2 in the second over.
Sikandar’s sixes
Scotland did not hit a single six in their innings, and there were none in the first 31.5 overs of the match before Raza, the man who seems to be able to do almost anything at the moment, sent MacLeod over the midwicket boundary and barely broke a sweat. Two overs later, he did it again when he sent Michael Leask over the covers. Before Raza’s first six, Zimbabwe required 63 runs off 49 deliveries; after his second one 43 runs off 41 balls, which is how much his innings allowed pressure to evaporate from Zimbabwe’s effort.
Tags: Craig Ervine, George Munsey, ICC Men's T20 World Cup, Scotland, Scotland vs Zimbabwe, Sikandar Raza, Tendai Chatara, Zimbabwe