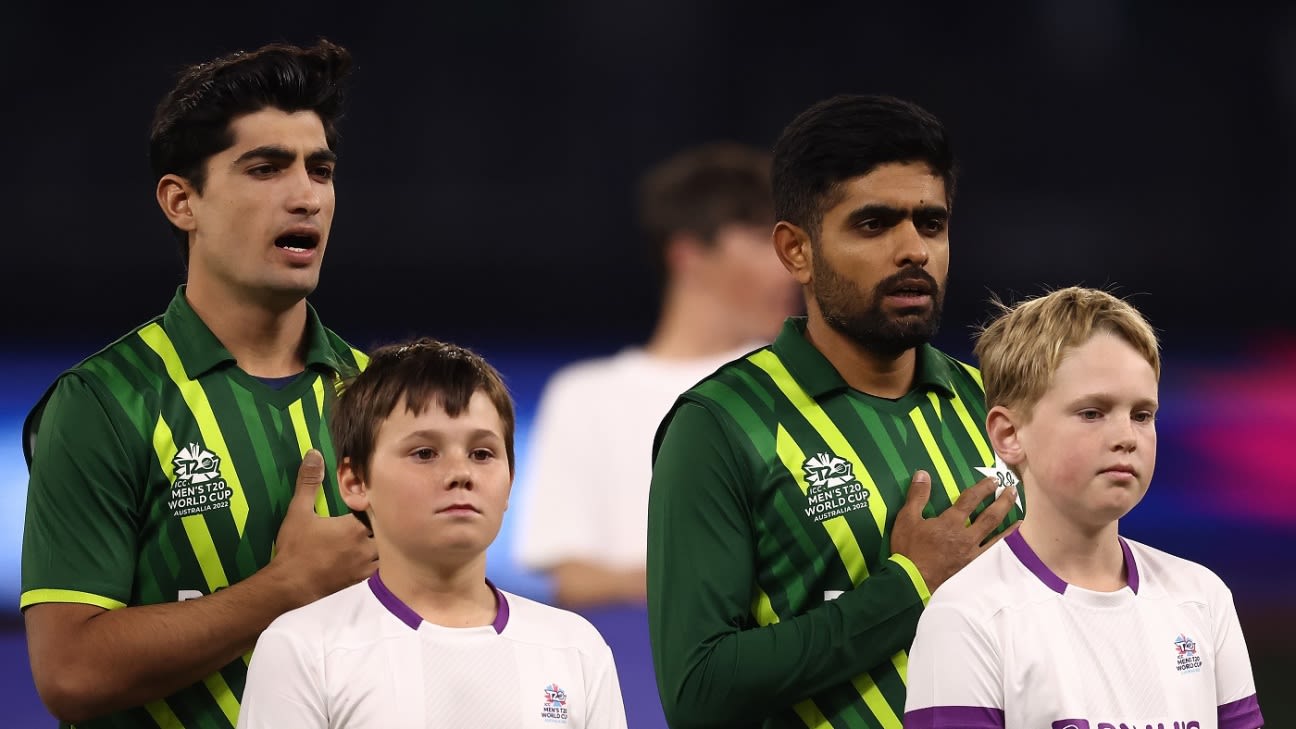 Last-ball defeats in consecutive matches. Points column empty. Best two batters quiet. Players failing to hold their nerve in make-or-break moments. Pakistan have ticked all those boxes and, as a consequence, find themselves in a precarious position where their fate in this World Cup is not entirely in their hands anymore.

What’s still in their hands, though, is winning their remaining three matches to keep their semi-finals hopes alive. To do that Pakistan need an injection of intent in their batting, especially in their powerplay. Against India, put in to bat, Pakistan were 32 for 2 after six overs. Then, chasing a small target against Zimbabwe, Pakistan made 28 for 2 in that phase. Those starts have had a knock-on effect on the middle overs as well, where Pakistan have not been able to go as hard as they otherwise might have.
Related
Since the end of the 2021 T20 World Cup, Pakistan’s run rate in the powerplay (6.88) is the second-lowest of all Full Member teams. In comparison, India have gone at 8.44 in the first six overs, while Ireland (8.09), Australia (8.08), New Zealand (8.04) and South Africa (8.02) have also scored at more than eight an over. In the same period, Pakistan’s batters have hit a boundary every 6.8 balls in powerplay, which is the third-lowest frequency among the Full Member teams. India, again, are on top of the pile, hitting a boundary every 4.9 balls.
At this World Cup, early wickets contributed to Pakistan’s powerplay struggles in both their games, but they’ve been sedate in this phase even when their top order has scored runs – in the period since the end of the 2021 World Cup, Pakistan actually have the third-best average in the powerplay behind India and New Zealand, which lends credence to the idea that they might need to break up their opening pair of Babar Azam and Mohammad Rizwan.
It’s been a long-running debate, but Pakistan have been steadfast in their strategy, and their think tank may be loath to change it at this stage; if they do stick with the same combination, the onus will be on Babar and Rizwan, the captain and vice-captain, to play smart cricket to try and keep their team afloat.
In such a state of mind, Pakistan could be vulnerable on Sunday against Netherlands, whose players are hungry to cause an upset against a top team. The Dutch have recent experience of playing Pakistan and competing well, in an ODI series where they twice failed to capitalise on winning positions in three matches. At this World Cup, they nearly edged out Bangladesh, but couldn’t quite match up to the might of India earlier this week. In Pakistan, Netherlands have an opponent with a hint of vulnerability about them, and they may sense a chance that they could well grab if they go out and play with freedom.

Paul van Meekeren has been frugal in the powerplay at this World Cup, conceding just 30 runs in 42 balls in that phase•Getty Images

Since the end of the 2021 T20 World Cup, Babar has a strike rate of 126.60 in 27 innings. In the same period, Rizwan’s strike rate is 125.22 in 26 innings. They’ve both contributed to big wins in this period, though, so Pakistan have kept faith in their partnership. They’ve both failed twice in this World Cup, neither making it out of the powerplay against either India or Zimbabwe. Can they find a way out of their misery?

Both Pakistan openers, though, will need to guard themselves against Paul van Meekeren. The Dutch fast man speaks his mind, and he’s quick and can lock batters in their crease with pace and movement, and has been among the most impressive powerplay operators in this tournament, conceding just 30 runs in his 42 balls in that phase.

Pakistan might think it’s time to swap one Ali for the other, and bring Asif back for Haider.

Perth could see some early-morning rainfall on Sunday, though the weather is likely to be clear during the afternoon when the match is set to be played. The pitch at the Optus Stadium has provided plenty of pace and bounce for the quicks, and Pakistan’s fast bowlers could enjoy themselves provided they don’t repeat the mistake of bowling too full that they made against Zimbabwe.

“Yeah, we’ve obviously seen that the Pakistan team is beatable, so that’s good to know. Obviously, playing them in the World Super League not so long ago in the Netherlands has given us a lot of confidence because we came quite close in those matches. Hoping to get over the line this time. It would be great.”
Netherlands coach Ryan Cook

“We haven’t started well, but the morale of the team is high. We all saw we played well against India. We couldn’t quite close it. Same with the second game. This is cricket. There are always ups and downs, but everybody knows the team efforts. We have belief in each other. We get hurt as much as the fans. We have stuck together, there is still time in this tournament, we will try to put up good cricket for the fans.”
Pakistan fast man Haris Rauf
Tags: Babar Azam, ICC Men's T20 World Cup, Mohammad Rizwan, Netherlands, Netherlands vs Pakistan, Pakistan, Paul van Meekeren