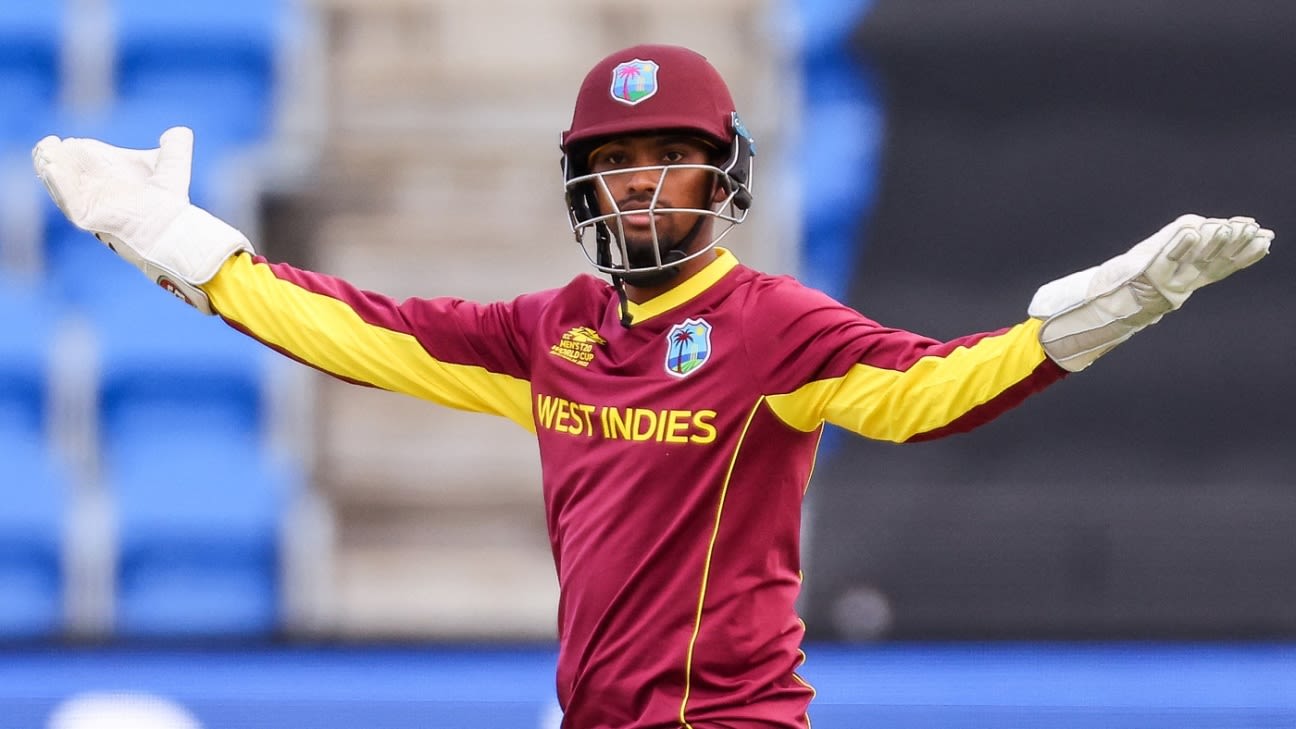 West Indies’ white-ball captain Nicholas Pooran has vowed to use the hurt of his team’s first-round exit at the T20 World Cup as “motivation” to bounce back strongly. After suffering defeats against Scotland and then Ireland, West Indies failed to make the T20 World Cup proper for the first time.
“Obviously, we don’t know what the future holds but we will take it day by day,” Pooran said on the sidelines of the Super50 Cup, West Indies’ regional one-day tournament, where he is set to lead Trinidad & Tobago. “Again, it was a learning experience for all of us and this is our journey and our story. Time will tell what will happen but for now it is just about focusing on ourselves and how we can get better as individuals.
Related
“Rest is the ultimate [way to heal] and every player needs that but inside it is still hurting as well. I want to use that hurt as motivation and obviously come back strong.”
The reaction to West Indies’ early exit was sharp and swift, with with CWI president Ricky Skerritt blaming the batters and promising that a “thorough post mortem” would be carried out. Former Australia captain Ricky Ponting was also critical of West Indies’ performances, calling their first-round exit a “disgrace”. Phil Simmons, meanwhile, has resigned as head coach, with his last assignment set to be a two-Test series in Australia, which starts next month.
Pooran suggested that he would not step down as captain, but look to learn from these setbacks. “I have been thinking about the last couple of months…Playing cricket is my dream and obviously I have had my test in life as well and this is another test for me,” he said. “I am a person that embraces challenges and this was just another one for me.
“It is not going to stop me. I am going to continue to learn from my experiences and again I am happy I can wake up in the morning and see that I have an opportunity to play cricket again.”
Pooran’s immediate focus will be to help Trinidad & Tobago defend their Super50 title, with the tournament scheduled to begin on October 29. He will captain a team that will include Sunil Narine, Akeal Hosein and Yannic Cariah. As far as West Indies’ commitments are concerned, Pooran is set for a long break, with the side’s T20I tour of Pakistan in January 2023 set to be rescheduled to 2024. As a result, West Indies will not play any white-ball cricket until a full tour of South Africa in February-March next year.
Need honest soul-searching to come up with the answers – Johnny Grave
Johnny Grave, CWI’s chief executive, has declared that he won’t step down from his role following West Indies’ T20 World Cup debacle.
“I’m not in control of that. My contract runs out June 2023. But am I a quitter? Am I going to resign? No, I’m not,” Grave said on the Mason and Guest radio show.
He said that West Indies need “honest soul searching” from the players as well as the management. “For whatever reason we did not execute under the pressure in Hobart,” Grave said. “Now, was there too much pressure placed on the team? Why did the players not execute those skills?
“Why did they effectively, as we did in 2021, get off to the worst possible start? We all know that in tournament sports, the teams that start well try and keep that momentum through the event. And in 2021, we started horribly – not just losing to England, but losing in such a manner that your net run rate is never going to recover.
“And unfortunately, in that opening game [this time], we had exactly the same happen again. Yes, we were able to recover and beat Zimbabwe, albeit probably not as convincingly as any of our fans or us would want. And then ultimately, against Ireland, too, we know from playing them in January, they are an ICC Full Member, they are not a walk in the park for any team now. But we had to find a way to win and get over the line. And we didn’t. And that’s why we need this review. That’s why we need honest soul searching because we have got to come up with the answers.

“There are things in West Indies cricket, that are not world class and not even eighth in the world. We are way below that in some of the elements of our cricket system.”
Johnny Grave, CWI chief executive

“There are things in West Indies cricket, that are not world class and not even eighth in the world. We are way below that in some of the elements of our cricket system. Some of them [include] execution under pressure, winning key moments in games. More often than not we seem to be second in those situations. And that’s why we have got to think very hard about how we construct this independent review – while I’m saying independent review, that would be my preference. It can’t just be players or coaches. It’s got to be people who understand and have been successful in both setting strategies and structures, and also players who have executed them. We’ve got get the information from our players and dig deep.”
West Indies’ overall T20I record in 2022 has been so poor that their win-loss ratio of 0.53 is the second worst among teams who have played at least 15 games during the period. Only Bangladesh have fared worse than them on this front this year. And since their title triumph in the 2016 T20 World Cup in India, West Indies have lost six out of their eight matches in the tournament. Grave urged West Indies to find some quick fixes and improve their results.
“Our 2016 winning side, the players that I spoke to coming out of 2021 genuinely were shocked at the fact they weren’t able to win and do well,” Grave said. “But we’ve got to be able to ask the right questions, get the answers, and then analyse them properly and come up with some really clear, short term, medium term and long term [recommendations].
“We’ve got to get some quick wins and some quick fixes because West Indies is hurting, and they want results, and they want them fast. And if we don’t get them, then we probably won’t have time or the opportunity to implement the long-term objectives because we’ll all be given our marching orders. And it will be up to someone else to take on this enormous challenge and enormous responsibility.
“I didn’t come into this role, and I don’t think anyone comes into West Indies cricket, thinking it’s going to be easy, thinking there are magic wands. I don’t think Desmond Haynes (chief selector) thought that he was suddenly going to be picking teams and they’re going to be winning across all formats. Certainly, I didn’t think that we were going to come and it will be a bed of roses, but we’ve got to work collaboratively. We’ve got to find answers to these tough questions and we’ve got to get on with our jobs of improving West Indies cricket.”
Tags: ICC Men's T20 World Cup, Nicholas Pooran, Super50 Cup, West Indies