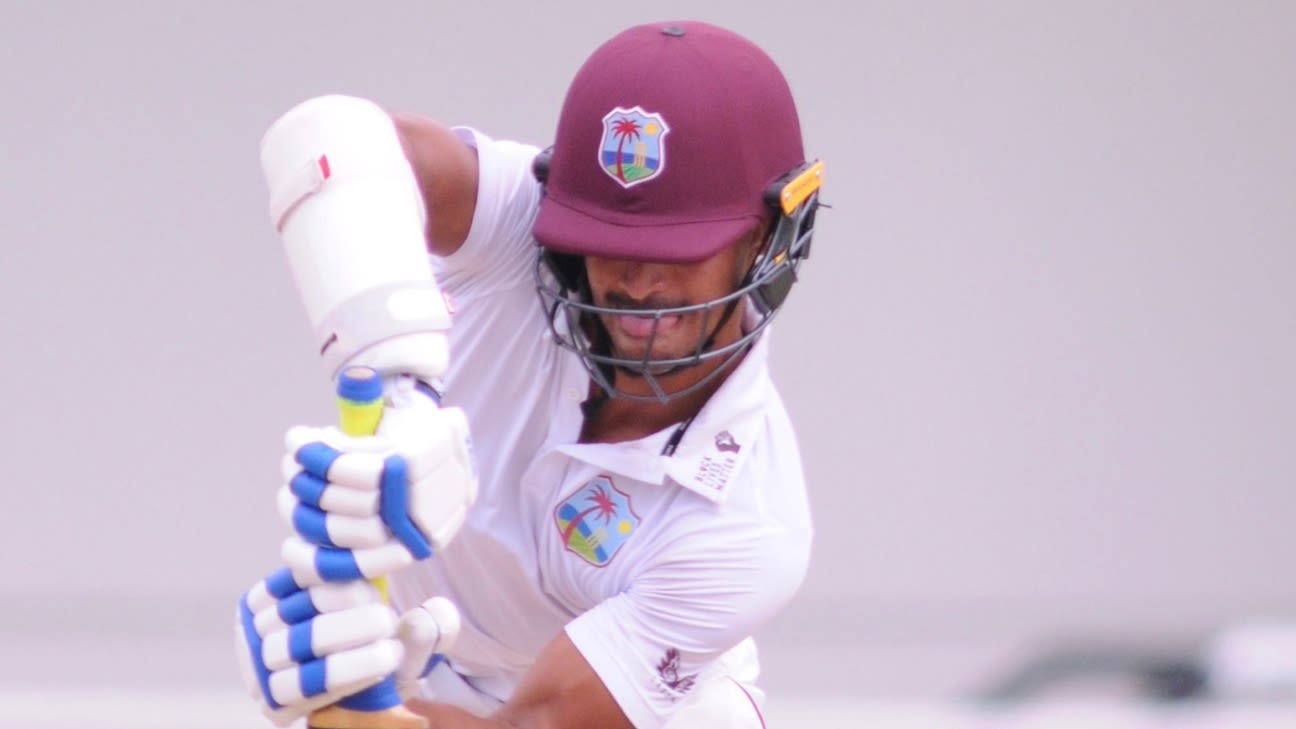 Tagenarine Chanderpaul, the son of former batter Shivnarine, has earned his maiden call-up to West Indies’ senior side for the two-match Test series in Australia in November-December. Tagenarine, who was picked as a reserve batter for the home series against Bangladesh earlier this year, is expected to open the batting alongside captain Kraigg Brathwaite.
John Campbell, who had opened with Brathwaite against Bangladesh in June, was recently handed a four-year ban for violation of an anti-doping rule.
Tagenarine brings with him rich first-class form: he was the second-highest run-getter in the 2021-22 West Indies four-day championship, scoring 439 runs in eight innings at an average of 73.16. He followed it up with a 59 against Bangladesh in a tour match, and 49 and 109 not out against Bangladesh A.
Before heading to Australia, Tagenarine will likely turn out for Guyana Harpy Eagles in the Super50, West Indies’ regional one-day competition, which kicks off on October 29.
“I think what you have to take into consideration too is with Tage, a young man, he’s got a very good technique to the new ball which is good,” Desmond Haynes, the lead selector, said. “He leaves alone very well. When you go to places like Australia, you don’t want to see the No.3 batsman coming in too early or the number four. So I think he and Kraigg would definitely complement each other because at least they would be looking at what openers should do for a team as well, which is build a foundation for the side so the guys coming in down the order would not get the new ball.
“I think it’s a good choice of picking the young man. [There is] no better place to start your cricket career than Australia where a lot of people believe if you do well against Australia then you’re rated. It’s always been considered a tough place to play cricket and I think he has the ability to do it and I want to wish him all the best.”
Roston Chase and Shamarh Brooks, who was part of the 2022 T20 World Cup squad after hitting a barnstorming century in the CPL, returned to the Test side. However, there was no room for Rahkeem Cornwall or left-arm fingerspinner Gudakesh Motie. Cornwall has been omitted despite being the highest wicket-taker in the four-day championship, with 23 strikes in five matches at an average of 21.47. That meant Chase, who is returning from an injury, is the only proper spin option in the squad.
Tagenarine Chanderpaul has been in rich form in domestic first-class cricket•Cricket West Indies
“Roston Chase has returned to the squad as an allrounder and we believe his experience and skillset will be beneficial and Shamarh Brooks has also returned to bolster the middle-order batting,” Haynes said.
Devon Thomas was retained as the back-up wicketkeeper to Joshua Da Silva. Jason Holder, who was rested for the Test series against Bangladesh, returned to lead a bowling attack that includes Kemar Roach, Alzarri Joseph, Jayden Seales and Anderson Phillip.
The squad is expected to assemble in Australia on November 10, 20 days ahead of the first Test in Perth. They will play a three-day warm-up game in Canberra from November 17, followed by a four-day pink-ball match against the Prime Minister’s XI, also in Canberra, from November 23. The second Test in Adelaide will also be a day-night affair, starting from December 8. The two Tests will be part of the World Test Championship (WTC).
The Australia tour will be Phil Simmons’ last assignment as head coach of West Indies. After the side suffered a first-round exit in the T20 World Cup in the country earlier this month, he had put in his resignation. However, he will participate in CWI’s post-mortem of their early exit.
While West Indies’ T20I record has been woeful in 2022, their Test record is encouraging: they notched up series wins against England and Bangladesh, though both times playing at home. West Indies have not won a Test in Australia since February 1997 and have lost 12 of the 14 Tests they have played in the country since.
Squad: Kraigg Brathwaite (capt), Jermaine Blackwood (vice-capt), Shamarh Brooks, Nkrumah Bonner, Tagenarine Chanderpaul, Roston Chase, Joshua Da Silva (wk), Devon Thomas (wk), Jason Holder, Kyle Mayers, Alzarri Joseph, Anderson Phillip, Raymon Reifer, Kemar Roach, Jayden Seales
Tags: Jason Holder, Rahkeem Cornwall, Roston Chase, Shamarh Brooks, Tagenarine Chanderpaul, West Indies, West Indies in Australia