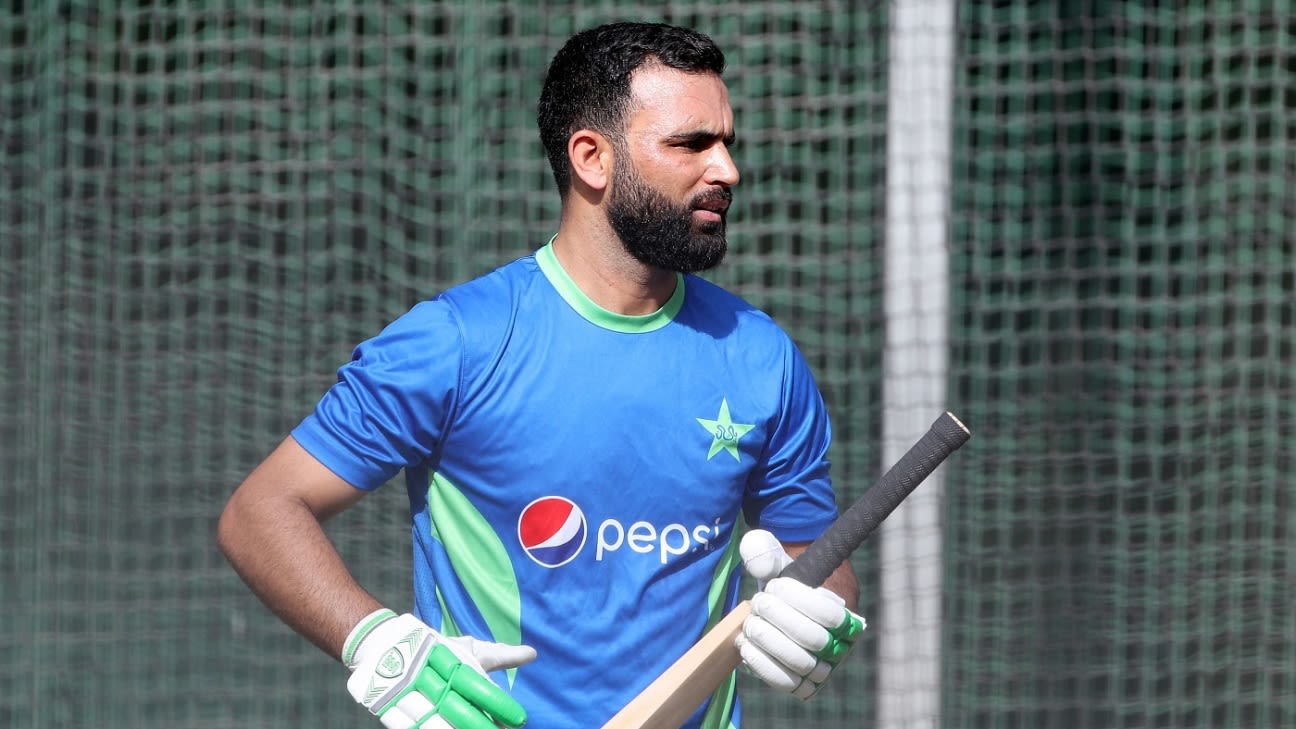 Fakhar Zaman has been ruled out of the T20 World Cup*, hours after Pakistan admitted they took a risk bringing him to the tournament. He had come to Australia carrying a knee injury, which he aggravated during their match against Netherlands on Sunday. This means Pakistan will be without him for their must-win encounter against South Africa tomorrow, as well as their final group game against Bangladesh later this week.
This injury was the reason Fakhar was originally not part of the 15-man squad for the tournament. He eventually came in as a late addition when he replaced legspinner Usman Qadir. Fakhar missed the defeats against India and Zimbabwe before returning against Netherlands in Perth where he made 20 off 16 balls but in the course of the game suffered further problems with his knee. Mohammad Haris, who was a travelling reserve, has been approved as his replacement by the ICC technical committee.
Related
“Obviously with any knee injury it takes time to have 100% recovery,” Pakistan team doctor Najeebullah Soomro, said. “Fakhar and the team understood the risks of coming into the tournament and we got him in. You saw how he performed with batting in the last match, unfortunately in the last match he had a bit of a twist which aggravated his injury.
“We were aware of the risks of the comeback. He is obviously an important player for the team. The player, the medical staff and the team management were aware of that. We decided to bring him back in. In cricket, and any sport, we take risks. Sometimes they pay off, sometimes they don’t.”
Fakhar’s absence could mean a chance for Asif Ali to return after he was left out following the opening game against India as Pakistan went for an extra bowling option. Other batting options available include Haider Ali and Khushdil Shah.
Injuries dogged Pakistan in the lead-up to this tournament, most significantly around fast bowler Shaheen Afridi. He has played all three matches in the Super 12s but has just one wicket for his efforts amid much speculation about how fit he is, with Afridi himself admitting before the Netherlands match that he was still working his way back. However, from a medical point of view, Soomro insisted that Afridi had ticked all the boxes for his return.
“There’s medical fitness, then in matches you need to have a different form of performance attributes,” he said. “From a medical point of view we were confident he was completely fit. You can see how he’s improving every single game…from our point of view we are very confident with how he’s going. In my view, the medical team, the specialists in involved, have all worked really hard with him, day and night, and from a medical point of view we are confident he’s back in full flow.”
Even if Pakistan win their final two group matches against South Africa and Bangladesh they will need other results to go their way to earn a semi-final spot.
“Yes, you do feel bad but you cannot change that,” Naseem Shah said. “You have to move on. The boys have gelled together and the morale of the team is alright. We are trying to focus on the next games and win those because you cannot do anything about the past games.”
*This story was updated with confirmation of Fakhar Zaman exiting the tournament and later with confirmation of the replacement
Tags: Fakhar Zaman, ICC Women's T20 World Cup, Pakistan, Pakistan vs South Africa