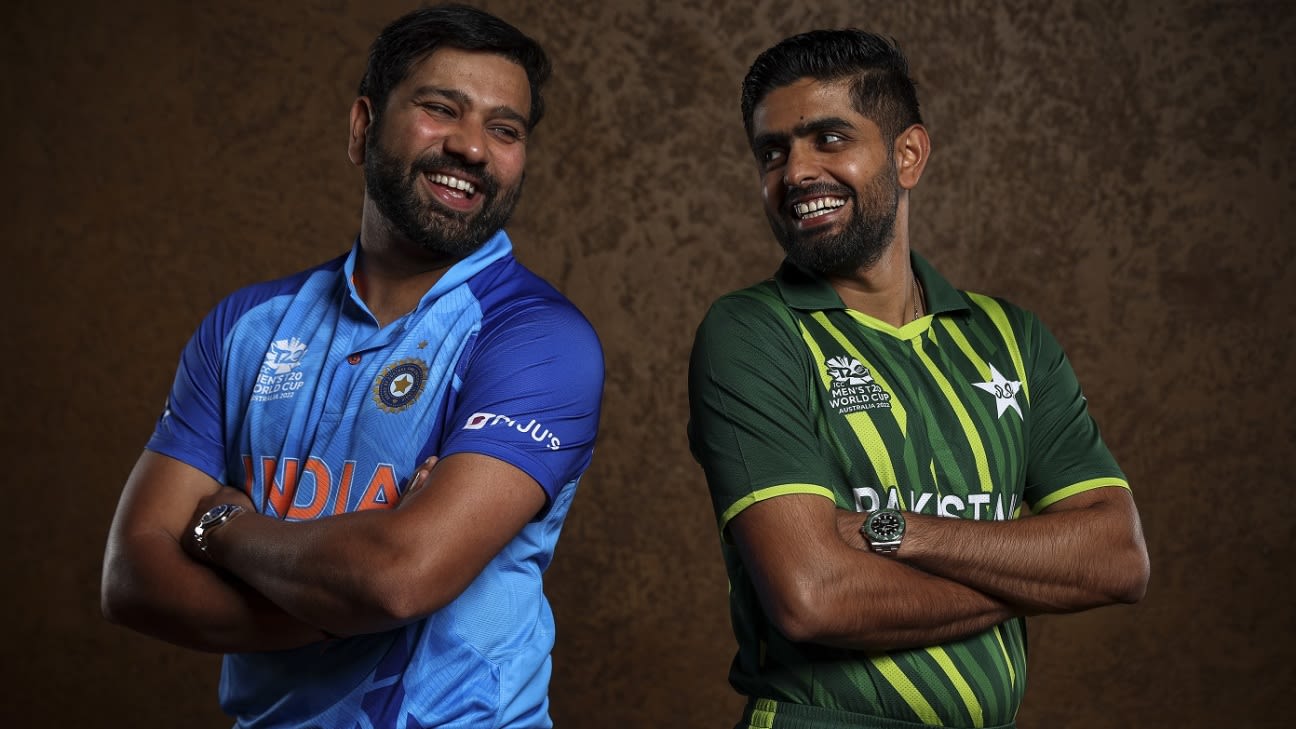 India-Pakistan matches are rare and usually only found in global tournaments, and this combination of scarcity and high stakes often brings out the worst in both sets of fans. And, over recent years, the pre-match hysteria has often given way to one-sided anticlimaxes on the field. Lukewarm blowouts giving way to jingoistic gloating and poisonous finger-pointing – do we really need India-Pakistan cricket if this is what it is defined by?
Related
Over a pair of meetings at the Asia Cup just over a month ago, however, the two teams reminded everyone of the electricity their cricketing collisions can generate. Both games were seesawing tactical battles that went down to the wire, with India winning the first with two balls remaining and Pakistan the second with one ball to spare.
It was clear then that these were two excellent T20 sides with contrasting strengths that aligned broadly with national stereotypes which had not always been accurate previously. On one side was a formidable batting unit with holes all over its bowling thanks to the absence of one key superstar; on the other a conservative top order that set its sights on par totals, confident in the ability of its high-quality, high-pace attack to defend them.
A clash of cricketing giants, and a clash of cricketing philosophies. What more could you ask for? Well, a World Cup setting, perhaps. And maybe a neutral venue that puts these philosophies to their stiffest test.
2:37

Rohit Sharma: ‘We are in a better position than the last T20 World Cup’

We have lucked out then, because Sunday will contain all these ingredients. Where better than Australia for the paciest attack in the T20I world to come up against some of the best players of fast bowling? Where better than the MCG and its 100,000-plus capacity for this to happen?
Where better, indeed, but for one little hitch; let’s just hope the rain stays away.

He’s returning from a long injury layoff, but if you’ve watched a clip of the Rahmanullah Gurbaz ball, you’ll know Shaheen Shah Afridi is well and truly back. Afridi’s new-ball burst was the most influential performance in Pakistan’s victory over India at last year’s T20 World Cup, and how India perform could well hinge on how little damage they allow him to inflict during the powerplay.
18:37

Shaheen Shah Afridi: the rise of the falcon

Suryakumar Yadav is arguably the best T20 batter in the world at the moment, but he has not had much of a chance yet to show what he’s capable of in a World Cup game, having only batted three times – twice in the closing stages of small chases – at last year’s tournament. Getting him out early could be key to Pakistan doing well. He is comfortable against pace and spin, and he hits boundaries all around the ground, as capable of punching short-of-a-length balls with a vertical bat as he is of sweeping and slicing full-length balls along and behind square.

India will have to make two big calls regarding the composition of their bowling attack. One is picking three out of their four specialist pace options. Then there is the issue of spin. Five out of Pakistan’s notional top-six are likely to be right-hand batters, but they often use Mohammad Nawaz as a floater to break that pattern. Should India pick their offspinner R Ashwin, then, or go with their preferred spin pair against right-hand-heavy teams?
India (probable): 1 Rohit Sharma (capt), 2 KL Rahul, 3 Virat Kohli, 4 Suryakumar Yadav, 5 Hardik Pandya, 6 Dinesh Karthik (wk), 7 Axar Patel, 8 Harshal Patel/Mohammed Shami, 9 Yuzvendra Chahal/R Ashwin, 10 Bhuvneshwar Kumar, 11 Arshdeep Singh
Pakistan have five terrific fast-bowling options, but they can probably pick only three of them. Afridi and Haris Rauf are certainties, with Naseem Shah and Mohammad Wasim most likely contesting for the one other slot. Shan Masood, meanwhile, has been declared fit to play, a day after suffering a blow to his head during a training session. Fakhar Zaman, however, is unavailable, with Pakistan keeping a close eye on his recovery from a knee injury.
Pakistan (probable): 1 Mohammad Rizwan (wk), 2 Babar Azam (capt), 3 Shan Masood, 4 Haider Ali, 5 Iftikhar Ahmed, 6 Asif Ali, 7 Mohammad Nawaz, 8 Shadab Khan, 9 Naseem Shah, 10 Shaheen Shah Afridi, 11 Haris Rauf
1:13

India sweat it out ahead of T20 World Cup opener

First, the bad news. It may rain on Sunday, though there’s a bit of encouraging news on that front.
Now for the good news. The last three India-Pakistan T20Is have all been played in Dubai, a venue where the toss influences results disproportionately, and have all been won by the chasing side. Chasing teams have won each of the last five completed T20Is at the MCG as well, but that could simply be a quirk of probability, because, as our superlative guide to the venues at this World Cup tells us, chasing teams have a 50% win record in all T20 games at this ground since the start of 2020.
This suggests the toss may not be quite so crucial, though you would probably still expect the team winning it to chase. Also expect a lot of hard-length bowling, with bowlers encouraging batters to hit towards the long square boundaries and keeping them away from the relatively short straight boundaries.
1:20

What do Rohit and Babar talk about when they meet?

India, Pakistan fans in Melbourne get ready for big game

“Speaking of the game against Australia, the warm-up game, that was always the plan. We know he’s very good with the new ball, so we just wanted to give him a bit of a challenge to come and bowl at the death, and see what he can do. And most importantly his body was something we had to look at, because he’s just recovered from Covid, and we wanted to give him enough time. We wanted to play him in the next warm-up game, full 20 overs, but unfortunately it got washed off, and we didn’t get a chance to play him there, but in terms of preparation, I think he’s very well prepared. He’s been training with the team for a while now. He came to Brisbane quite early, and had a few sessions with the entire team. In terms of his readiness I think he’s very much ready. It’s just about going out and executing what Shami is known for.”
India captain Rohit Sharma on Mohammed Shami’s late introduction in the warm-up game against Australia, and his readiness to play the World Cup as Jasprit Bumrah’s replacement
“Off the field whenever we meet, we meet each other respectfully. That is sportsman spirit. Not just with India, but we bond well with all other teams. Whatever the situation on the field, everyone gives 100% for their country, we do the same. But off the field, we meet each other respectfully.”
Pakistan captain Babar Azam
Tags: ICC Men's T20 World Cup, India, Pakistan, Pakistan vs India