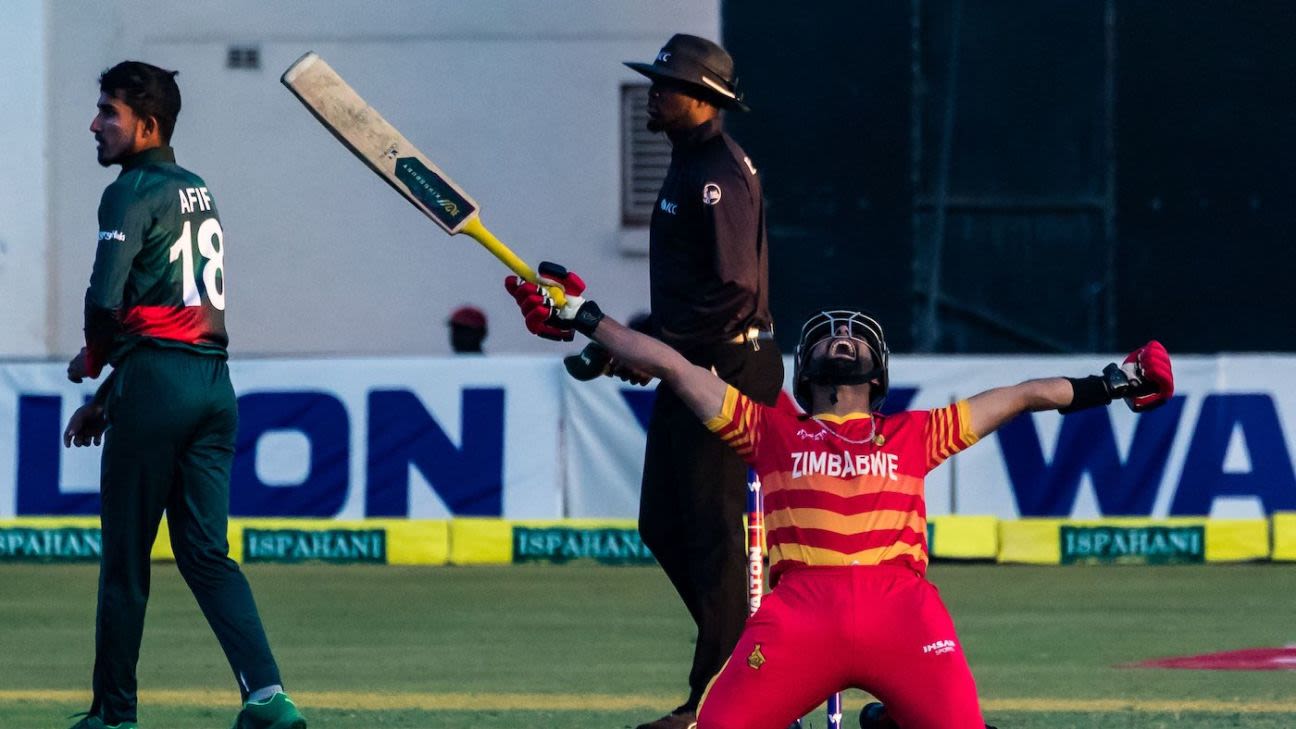 The joke among Bangladesh fans, particularly in the past eight years, is that their team schedules a series against Zimbabwe whenever they are out of form. But that overlooks the fact that it is the cricket boards – and not the teams themselves – that schedule series against each other. And in that respect, the BCB and ZC have been close friends for a very long time.
Zimbabwe have grown to be a fighting side in the last few years, culminating in their ODI and T20I series wins over Bangladesh in July 2022. The wins came around the same time they qualified for the T20 World Cup, where they are now one of the most talked-about teams, having just defeated pre-tournament favourites Pakistan by one run.
It has been quite the campaign for Zimbabwe – three wins in four completed matches – especially given how they have been missing World Cups since 2016. It’s almost like they’re making up for lost time.

The win over Pakistan brought back memories of their upset of Australia in the inaugural T20 World Cup, and other great moments from further back. Zimbabwe’s golden generation wowed the world in 1999 when they beat India and South Africa and made it to the Super Six. Now, watching Craig Ervine’s captaincy, Sikandar Raza’s heroism and a fast-bowling unit going above and beyond, it seems like the old days are back.
Zimbabwe’s form is as good as their fighting spirit, and the way they defended the 130 against Pakistan was proof. Sure, they had a bit of luck go their way, but all good teams and individuals will tell you that luck comes with hard work, and the right intention.
Bangladesh, meanwhile, are back in trouble in T20Is. After they beat Netherlands in their first game, there was hope that the fast-bowling unit could keep them afloat if the batting can come in support. But neither clicked against South Africa.
And so, two old rivals meet for the first time in a T20 World Cup with the tables turned. Bangladesh are the chasing side now, feeling the heat from everywhere, especially from their fans. And Zimbabwe are the ones eyeing an unlikely tilt at a semi-final spot.
Shakib Al Hasan’s bowling form is a concern•AFP/Getty Images

There’s little doubt that this has been Raza’s year in Zimbabwe colours, but Luke Jongwe has been the perfect foil. A fast-bowling allrounder, Jongwe bowls at a decent clip in the middle overs, but it is his big-hitting (strike rate 148) that has been important for his side. Jongwe has made three match-winning contributions in T20Is this year, including an unbeaten 10-ball 20 against Ireland in the first round. Jongwe will be handy in Brisbane where he will be expected to play a holding role with the other three tall quicks attacking Bangladesh.
Related
Shakib Al Hasan is in great nick with the bat, having scored three half-centuries this year. But he hasn’t had worse bowling average and strike-rate, currently at 37.25 and 28.5 respectively, since 2012 (minimum eight matches played). Interestingly Shakib’s 7.84 economy rate is his highest in a calendar year, although he has said he feels in good bowling form. His curved run-up in the tri-series in New Zealand earlier this month looked like a sign of desperation to fix his bowling form.

Teams batting first have won four out of the six T20Is in Brisbane, with 168 being the average first-innings score. No problems on the weather front on match day.

“I don’t think I need to tell you but we definitely have a plan. I think we respect Zimbabwe, they had an amazing performance against Pakistan. I watched every ball of it. The way they pulled it off against Pakistan was unbelievable. Full credit to them, full respect.”
Bangladesh technical consultant Sridharan Sriram, when asked how his side will stop Zimbabwe
Tags: Bangladesh, Bangladesh vs Zimbabwe, ICC Men's T20 World Cup, Zimbabwe