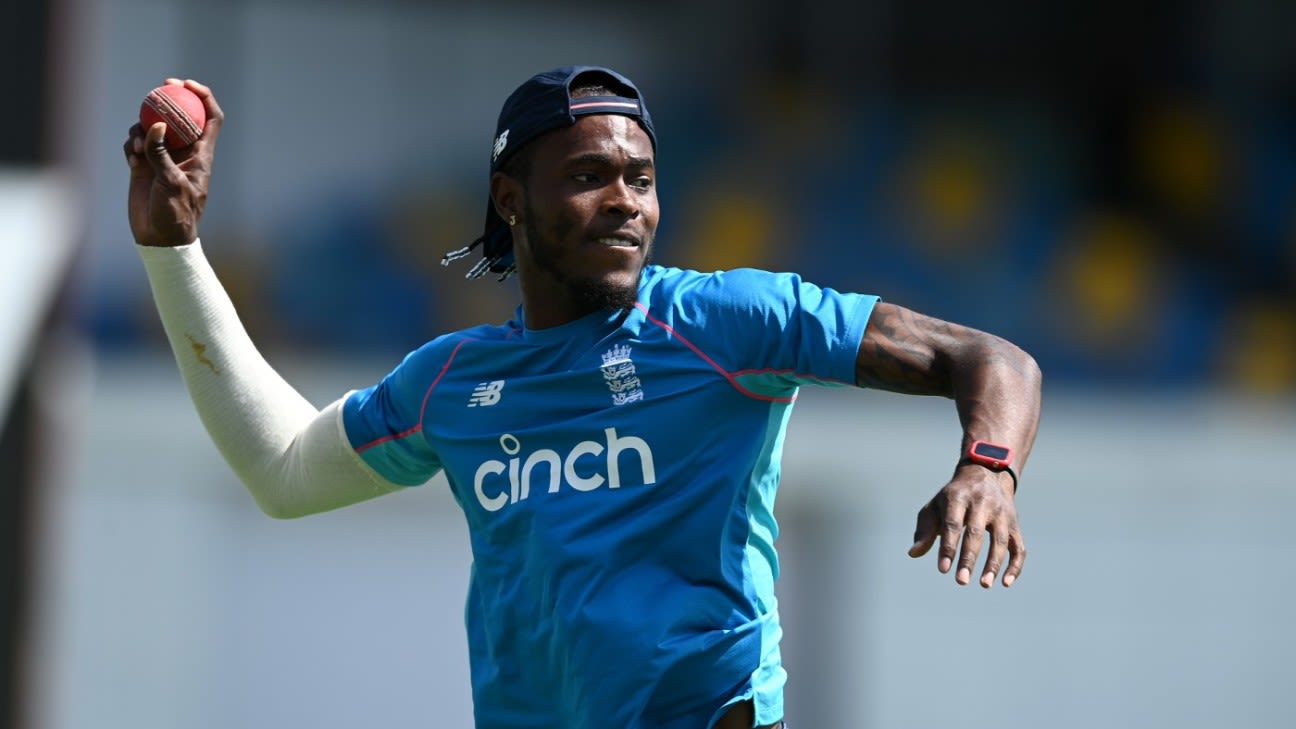 Jofra Archer will join England Lions’ training camp in the UAE next month as he continues his rehabilitation from a back stress fracture which ruled him out of the 2022 summer, and could play a role in their practice match against England.
Archer has not played for England since March 2021 and has not played any competitive cricket since July 2021. He spent last year struggling with a long-standing elbow issue which required multiple bouts of surgery and then suffered his back stress fracture while preparing to make his comeback earlier this year.
He has been building up his bowling over the last few months and retained his central contract for 2022-23, with England believed to be optimistic about the prospect of him returning to full fitness in time for one of their tours in early 2023.

Jofra Archer is getting back up to speed

Archer is one of three fast bowlers, along with Saqib Mahmood and Brydon Carse, who will travel to Dubai and Abu Dhabi to continue their rehab, shadowing a 15-man Lions training group which includes Matthew Fisher, who also missed most of the 2022 season through injury. The camp takes place from November 6-27.
Mo Bobat, the ECB’s performance director, said that Archer would play “a meaningful part” in the Lions training camp and suggested he could play “some sort of part” in the three-day practice match against England’s Test team, which starts on November 23 ahead of their tour to Pakistan in December.
“I rang Jofra to talk to him about this training camp,” Bobat said, “and he said to me, ‘this is the first positive selection call I’ve had in a long time.’ We had a bit of a giggle about the fact that all he’s had is difficult injury news recently and he’s missed having someone tell him he’s been picked for something.
“He’s in a good place mentally and is really excited about getting back involved. He’s been bowling at reasonable volumes and intensity. One of the dangers is rushing people back too quickly so what we’re trying to do with Jofra is build that really strong base of bowling over a period of time.”
Rehan Ahmed starred at the Under-19 World Cup earlier this year•ICC via Getty
Rehan Ahmed, the 18-year-old legspinning allrounder, is the standout name in the Lions squad. He has only played three first-class matches but is highly rated by the ECB and could travel to Pakistan with the Test squad as a net bowler. He is one of three spinners in the touring party, along with Nottinghamshire allrounder Liam Patterson-White and Sussex’s Jack Carson.
Dom Bess and Matt Parkinson were both considered for selection but are not involved in the tour. Bess will instead play grade cricket in Sydney, while Parkinson is due to work closely alongside the spin-bowling coach Carl Crowe – Lancashire’s assistant – after a disappointing season in red-ball cricket.
Haseeb Hameed and Dan Lawrence, who both played Test cricket last winter but have not been involved since Brendon McCullum took over as head coach in May, are both named in the Lions squad, while Matthew Potts – a surprise omission from the Pakistan tour after 20 wickets in five Tests this summer – is also due to travel.
Craig Overton has been given the opportunity to rest at home and manage an issue with a disc in his back while Dom Sibley suggested he would benefit from time working on his game at Surrey after re-signing from Warwickshire.
The Lions are also due to tour Sri Lanka in early 2023 to play competitive red-ball and 50-over games, and Bobat said that the selection process for the Abu Dhabi training camp had been “as individualised as possible”.
“Selection for the camp was conducted in close collaboration with both players and counties,” Bobat said, “and there are a number of players that have been encouraged and supported to take up other opportunities at home and overseas.
Related
“It’s great to be able to recommence Lions developmental experiences and the camp in Dubai and Abu Dhabi represents a fantastic opportunity for a high-potential group of players. The camp also supports the England Men’s team in their preparation for Pakistan, allowing England and Lions players to work closely together in overseas conditions.”
James Anderson and Jamie Overton will both join the camp from November 6 to start their preparation for the Pakistan Test tour, with Ollie Robinson, Jack Leach and Will Jacks due to join five days later. The rest of the squad will travel on November 18, with Ben Stokes, Harry Brook, Liam Livingstone and Mark Wood arriving straight from the T20 World Cup in Australia.
England Lions training squad: Tom Abell, Rehan Ahmed, Josh Bohannon, Jack Carson, Sam Conners, Sam Cook, Matthew Fisher, Haseeb Hameed, Tom Haines, Jack Haynes, Lyndon James, Dan Lawrence, Liam Patterson-White, Matthew Potts, Jamie Smith
Fast bowler rehab: Jofra Archer, Saqib Mahmood, Brydon Carse (November 11-27)
Test Player preparation: James Anderson. Jamie Overton (both November 6-19), Ollie Robinson, Jack Leach, Will Jacks (all November 11-19)
Tags: Dan Lawrence, England, England Lions (England A), England Lions in United Arab Emirates, Haseeb Hameed, James Anderson, Jofra Archer, Matthew Fisher, Rehan Ahmed