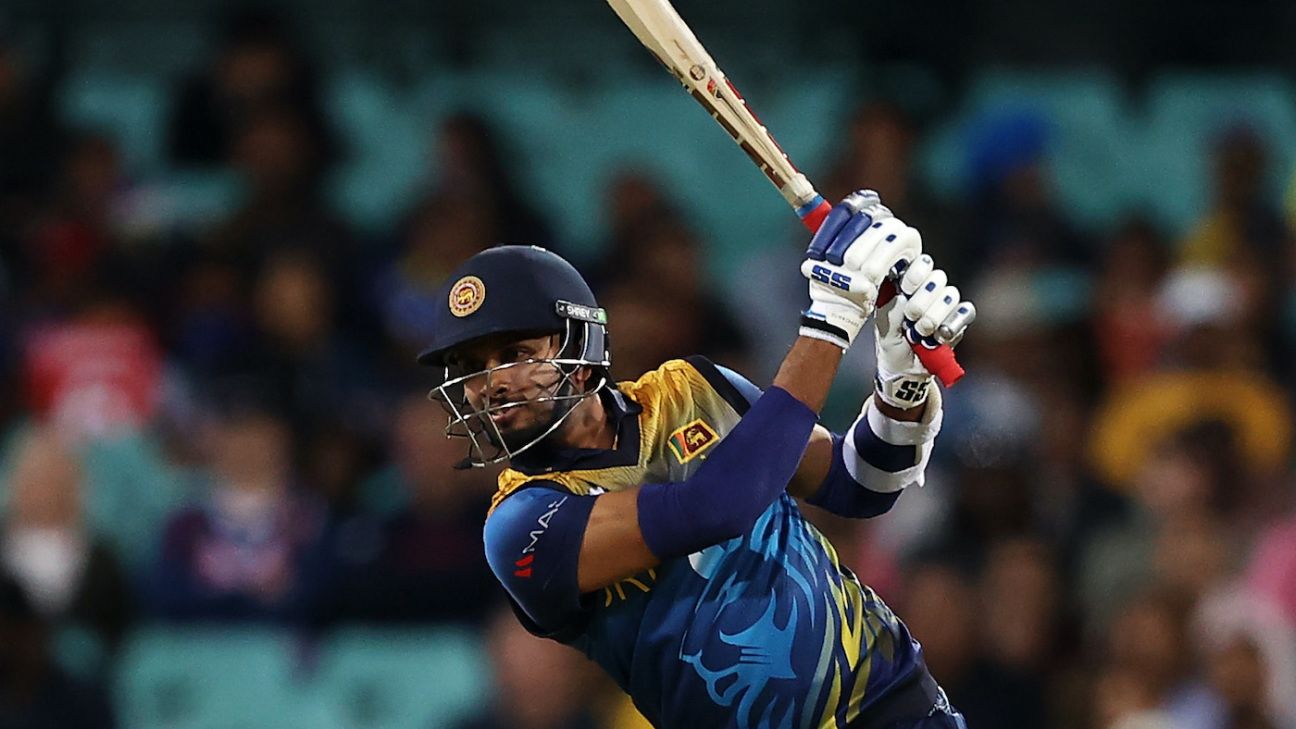 Sri Lanka captain Dasun Shanaka has backed his young team to again show their fighting qualities and push for a semi-final place at the T20 World Cup despite the heavy defeat against New Zealand at the SCG.
Shanaka admitted that their fielding effort had been a deciding factor – Glenn Phillips was dropped twice, including once by the captain himself – although added that the top order had not adjusted to the moving ball against Tim Southee and Trent Boult as they crashed to 8 for 4.
Related
With matches against Afghanistan and England to come, it is not impossible for them to progress although they may need help from other results.
“The dropped catches, I think that’s a game changer,” Shanaka said. “I think we could have kept them to a score like 130, 140 if we got that wicket. Yet again, we didn’t bat well upfront. We know that on these wickets, it’s tough. The first two overs are going to be the toughest two overs.
“We were three down after two. So it’s never going to help us when we’re chasing 160. It was always about playing straight against a moving ball. We were not good in this game. I think it was the worst we’ve played with the bat. So what is important is to regroup as a batting unit and win the next two games.”
Poor fielding was costly against Australia too in their previous game and also in the last year’s T20 World Cup, where they put down eight chances.
“In the Asia Cup our fielding was top class, but here we dropped some sitters,” Maheesh Theekshana said. “It can happen, you can drop a catch, but I don’t think we had [the] luck because Pathum [Nissanka] is our best fielder down the ground, it can happen to anyone.”
Shanaka knew there would not be time for Sri Lanka to dwell on their misfortunes before a must-win game against Afghanistan in Brisbane on Tuesday when there is also the threat of more rain.
“No one wants to drop catches when we play international cricket,” Shanaka said. “So we don’t need to point out anyone, and we don’t want to blame anyone. What we need to do is to regroup in the next game. We have bounced back in the past, especially this young team. They have gone through a lot of hard times. So I think we still can bounce back from this situation and manage to get to the semis.”
A lengthy injury list has compounded Sri Lanka’s problems in this tournament with the knock-on effect seen in this game where Theekshana, who had been a major threat early on, then held back for the death overs rather than being able to attack during the middle period.
“First we have to check and see the reason behind the players getting injured,” Shanaka said. “I don’t have the control [over that], the only controllable thing is when the players come to the field so I can get the maximum out of them.”
Tags: Dasun Shanaka, ICC Men's T20 World Cup, New Zealand vs Sri Lanka, Sri Lanka