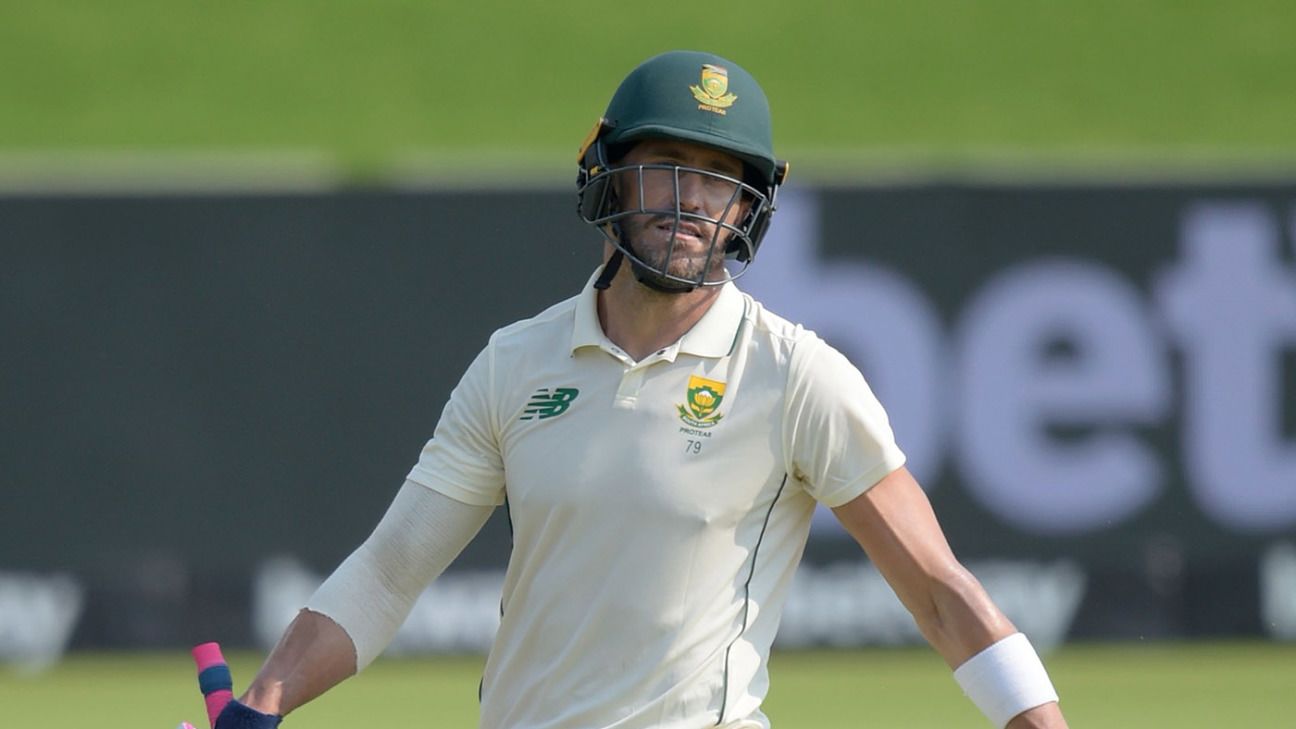 Faf du Plessis has said that a breakdown in his relationship with outgoing national men’s head coach Mark Boucher led to his retirement from Test cricket. In his autobiography Faf: Through Fire, du Plessis claimed that Boucher, Graeme Smith, CSA’s former director of cricket, and convener of selectors Victor Mpitsang ghosted him when he made himself available for the T20 team following his Test retirement in February 2021.
In the book, du Plessis reflects on a difficult childhood, a career that started in shadow of his best friend AB de Villiers, South Africa’s 2015 and 2019 World Cup heartaches, his elevation to national captain, and his eventual exit from the role, driven by what he terms a lack of soft skills from Cricket South Africa (CSA), particularly in the latter stages of his career.
In a chapter titled, “The Ghosts of Insecurity”, du Plessis begins to document his final phases with the national side, which started when Boucher took over for a series against England in December 2019. Du Plessis writes that the series “felt different” to previous ones because he did not feel backed by Boucher when he faced a media barrage.
Before the second Test, du Plessis, who was out of form at the time, was asked why Temba Bavuma – that team’s only black African batter – had been dropped and, in his response about Bavuma’s lean run, he remarked that the national side did not see colour. The comment caught fire and du Plessis was severely criticised for not understanding the nuances of South Africa’s segregated past, even as he struggled to score runs. He wrote that he did not feel Smith or Boucher provided him with the support he needed then, which set the tone for the rest of their relationship.
“I needed someone to back me up in the media, and Graeme and Mark were best positioned to clear the air and show public support for their national captain who was dealing with head- and tailwinds simultaneously. When Mark attended a press conference while this storm was raging, he didn’t do that,” du Plessis writes.
Related
Later in the series, Boucher asked du Plessis about his future with the national team and du Plessis committed to all three formats. However, he opted for a break in ODIs and, with the 2023 World Cup more than three years away, to stand-down as ODI captain. Boucher also asked du Plessis if he would give up the T20 captaincy but du Plessis writes he was “not convinced that relinquishing the T20 captaincy was the right decision”. Du Plessis went on to assume Boucher’s idea that he step down as T20 captain was only a “suggestion.” Du Plessis spent the rest of the series “concerned that Mark and I weren’t connecting on a deeper level as a captain and coach”, and felt their relationship was “somewhat cold and distant” and that he “increasingly noticed how close he was with Dean (Elgar) and Quinny (de Kock)”.
Later, du Plessis discovered that Smith and Boucher “felt strongly about appointing Quinny (as captain) in both white-ball formats”, which is what subsequently transpired. He finished the England series with a sense that he was “losing that connection with my purpose as a leader in the team”.
After the series, du Plessis took the decision that since “Mark and I didn’t click” it would be “better for the team to have a new captain than someone who couldn’t connect with the coach”. He resigned from the Test captaincy on February 17, 2020, but opted to stay on as a player and thought of himself as “leading without a title”.
That is the header of his next chapter, where du Plessis looks at the year between stepping down as captain and retiring from Test cricket, which was sandwiched between the worst of the Covid-19 pandemic. Du Plessis writes that in that time, when South Africa played Test series against Sri Lanka at home and away in Pakistan, his relationship with Boucher had become “purely transactional” and that he benefited from Boucher’s technical expertise. He went on to a career-best 199 against Sri Lanka but struggled in Pakistan, where he discovered “my desire and joy to play Tests for South Africa weren’t what they used to be”.
Du Plessis highlights an incident that he said took place during the first Test and underlined his decision to retire. It was on the third day, with South Africa having built up a slim lead in the second innings after having conceded a 158-run first-innings deficit. The day’s play was drawing to a close and Keshav Maharaj was padded up as nightwatch. The South African team had an unsaid rule, du Plessis writes, that they would send a nightwatch in if a wicket fell within 30 minutes or seven overs of play left in the day. But Boucher, he writes, told Maharaj he would not be needed because a nightwatch only goes out 15 minutes ahead of the close. Du Plessis, who says he told Boucher about the 30 minute precedent, had to get ready to bat and go out when Rassie van der Dussen was dismissed 25 minutes before the end of the day. Du Plessis lasted 20 minutes and was dismissed with five minutes left to play.

“Dealing with CSA during this time was like being in a relationship with someone who doesn’t value you as much as you value them. That complicated matters, and I had to work much harder than should have been necessary to get them to communicate efficiently.”
Faf du Plessis in his book

“I was furious when I left the field. We had just lost a main batter because of an avoidable tactical error. I said to myself that I was too emotional to address this with Mark immediately and that I should go to bed, sleep on it, and discuss it with him the following morning,” he writes.
South Africa went on to lose the game the next day, having set Pakistan a target of 88. “At our post-match review session, I said I did not agree with the way we had handled the situation. For the past ten years, the batter had had the option of a nightwatchman, and I wanted us to discuss this. I said that I wanted to share my opinion but I was happy to be challenged on my stance. I felt that the nightwatchman was a trump card to be used tactically when required but, if the team felt differently, I’d go with what they wanted,” du Plessis writes. “The vast majority of our batting unit said they preferred having the option of a nightwatchman. Mark tried to push back, saying that in his day the norm was fifteen minutes prior to the end of play, but that’s not how I remember it. I had also played with Graeme, [Jacques] Kallis and AB, and they used to love the option of not having to bat in the dark.”
This went on to leave a sour taste in both du Plessis and Boucher’s mouths. “Mark brought this conversation up again a few months later while we were still discussing my involvement in the [2021] T20 World Cup, and he said that he didn’t like the way I had challenged him on the nightwatchman. Personally, I always appreciated it when someone challenged me on something I did or believed in, especially if it came from someone who wasn’t necessarily a friend. But that’s just me,” du Plessis writes.
Du Plessis informed Smith of his decision to retire from Test cricket on his return home from that series and sent Boucher a message asking if they could meet to discuss an important matter. “He never responded to my message, nor did he contact me after the announcement had been made… His silence confirmed to me that I had made the right decision to retire from Tests.”
At the time, du Plessis was also negotiating a continuing role in the T20 side, with the 2021 and 2022 T20 World Cups in mind. Du Plessis wanted to continue playing T20s for the national side, on a contract deal, and be allowed to compete in T20 leagues outside of his national commitments. In essence, du Plessis was asking CSA to go somewhere it had not gone before: issue a T20I-only contract. Smith assured du Plessis he would look into the possibility. CSA’s board eventually decided it would not award T20I-only contracts but was still exploring the possibility of using du Plessis at the 2021 T20 World Cup, if he played in 65% of the national fixtures.
Du Plessis, wary of clashes between leagues and international fixtures, and with an IPL contract that “wasn’t enough to cover all my financial commitments” wanted a “formal offer that would enable me to play in fewer leagues”. He claims Smith never got back to him on this, which led to him accepting more league opportunities. But, du Plessis says, he did not leave it there and on May 11, 2021, “sent Graeme, Mark and Victor Mpitsang an email asking for better two-way communication. I said a breakdown in communication had led to AB not playing in the 2019 World Cup, which became a media mess. I wanted us to prevent a repetition of that. So what did they expect of a player who was not contracted but was in contention for the World Cup?” Du Plessis said he did not get a reply from any of them and that Mpitsang “had not had a single conversation with me since he’d been appointed to replace Linda Zondi in October 2020”.
He writes that “dealing with CSA during this time was like being in a relationship with someone who doesn’t value you as much as you value them. That complicated matters, and I had to work much harder than should have been necessary to get them to communicate efficiently. Their actions made it easier for me to accept that going to the World Cup was not meant to be.” Du Plessis did not go to the 2021 or 2022 T20 World Cups but remains in form in league cricket around the world.
CSA has yet to see a copy of du Plessis’ book and told ESPNcricinfo it will reserve comment until it has been through it.
Tags: Faf du Plessis, Graeme Smith, Mark Boucher, South Africa, Victor Mpitsang