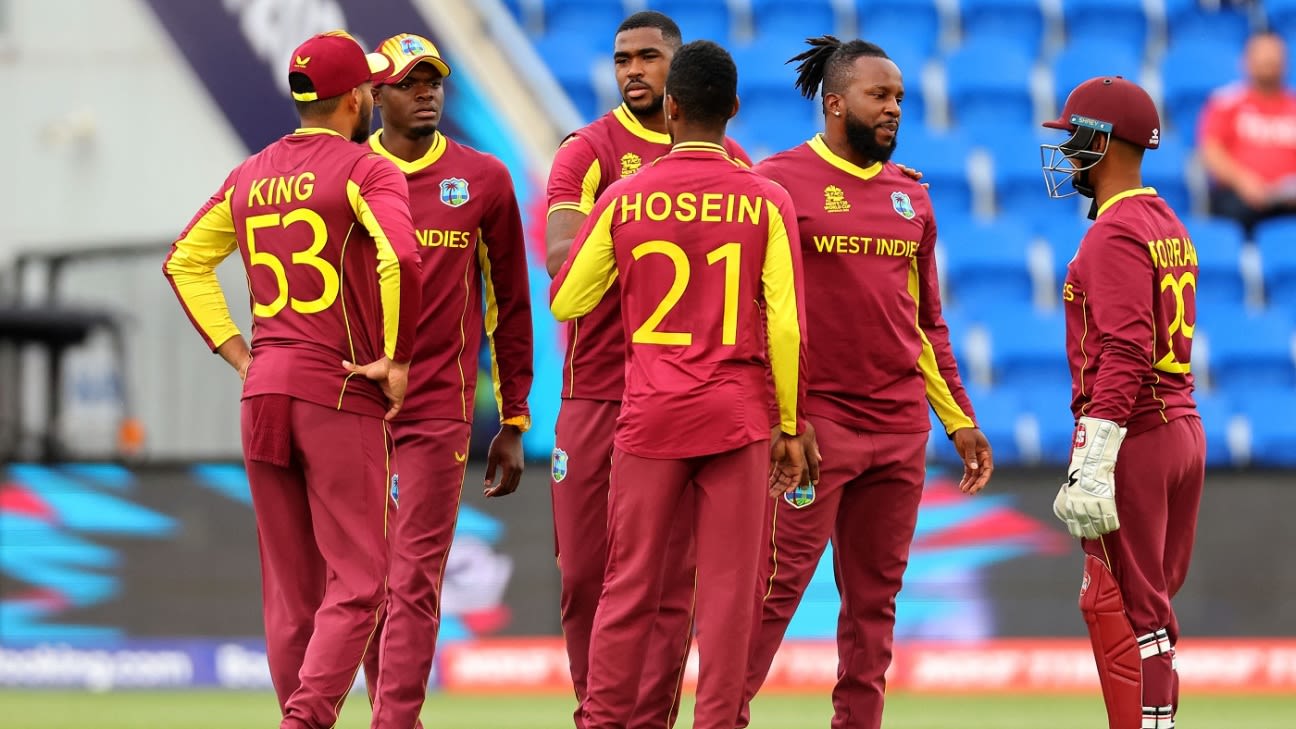 Ricky Ponting has called West Indies’ early exit from the T20 World Cup a “disgrace” after their heavy defeat to Ireland meant the two-time champions lasted just three matches in this tournament.
After an opening loss against Scotland in Hobart, West Indies gave themselves a chance with victory over Zimbabwe which left their final group game as a winner-takes-all contest. In the end, they could only muster 146 for 5 which Ireland hunted down for the loss of just one wicket.
Related
The reaction was swift with CWI president Ricky Skerritt blaming the batters and promising that a “thorough post mortem” would be carried out.
The build-up to the tournament had included the much-debated omission of Andre Russell from the squad then the axing of Shimron Hetmyer after he missed his flight to Australia.
“It’s a disgrace,” Ponting said at the SCG ahead of the opening Super 12s match between Australia and New Zealand. “It’s so bad for their cricket. They’ve got too much talent in that team and in West Indies cricket not to be able to make it through to the next stage of a World Cup.
“And even one of their main players not making it to the flight to get over here for a World Cup… To me this sort of sums up probably how little these events mean to the West Indies players and if you look at the way that they played you’d say the same thing. [Nicholas] Pooran and these guys, they’re much better players than what we’ve seen over the last couple of weeks so no doubt there’ll be some soul-searching done when they get back.

“They’re much better players than what we’ve seen over the last couple of weeks so no doubt there’ll be some soul-searching done when they get back.”
Ponting on West Indies’ early exit from the World Cup

“They’ll be as disappointed as anyone, it’s easy for me to stand here and say that it’s a disgrace that they haven’t made it, but they’ll be hurting as much as anybody. They would have had big thoughts and dreams coming here and they haven’t played anywhere near well enough to even progress. So they have got some work to do.”
West Indies return to Australia next month for a two-Test series with what will be a very different-looking side. Ponting was already concerned about how competitive those matches in Perth and Adelaide may be although he did note West Indies have been more competitive at home. But in Australia, where they last played a Test series in 2015-16, they have not won in the format since 1997.
“I didn’t need to see that to make me more worried about the first couple of Test matches,” Ponting said. “But what’s interesting with that, they’ve actually found a way, mainly at home I guess, in the last few years to be reasonably competitive on the Test front with Brathwaite… and Holder, he’s done a really good job in Test cricket for them.
“But they’re going to have to find a few lengths if they’re going to compete against the Aussies with the current group that the Australians have got. If you just line them up on paper, there’s no way you think that they could compete. Cricket’s a funny game, but they’re going to have to play out of their skins I think to make the first two Tests entertaining.”
Tags: ICC Men's T20 World Cup, Ricky Ponting, West Indies