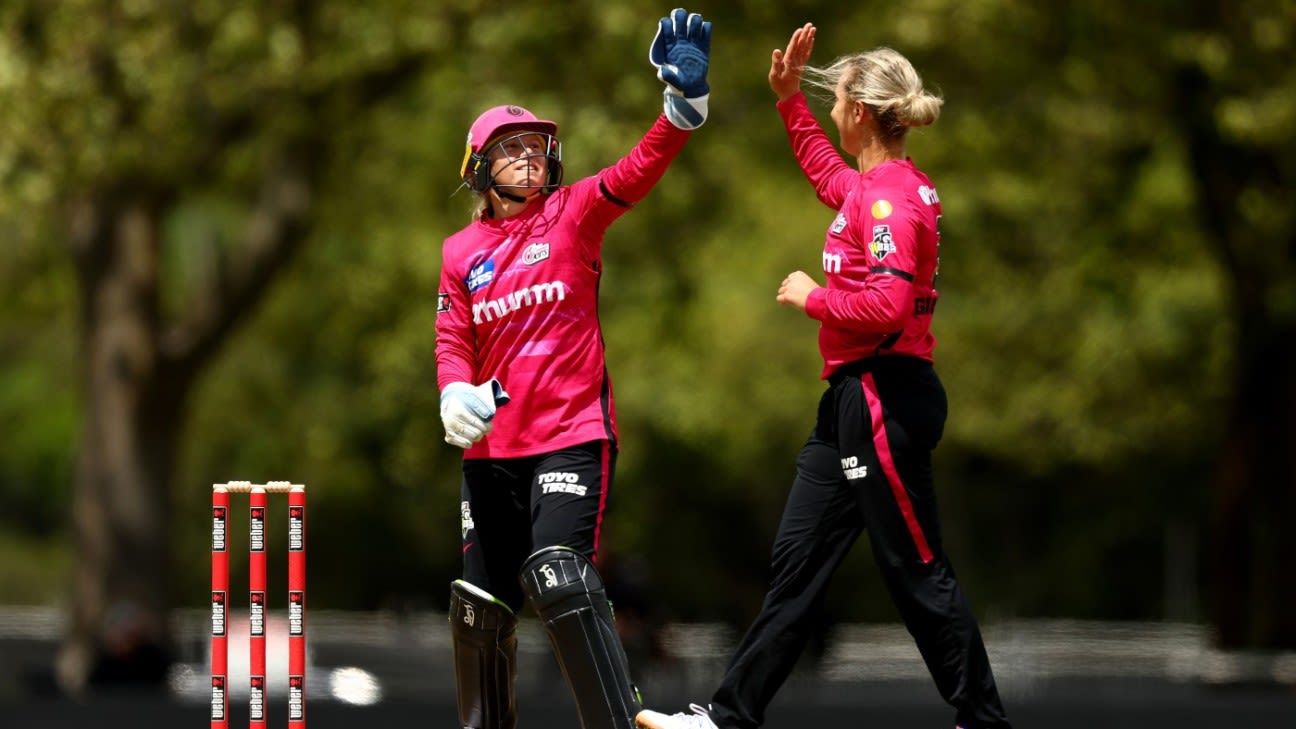 Sydney Sixers 96 for 2 (Gardner 43) beat Hobart Hurricanes95 for 8 (du Preez 26, Gardner 4-23) by 8 wickets under DLS
Ashleigh Gardner starred with bat and ball to help the Sydney Sixers to an eight-wicket win over Hobart Hurricanes.
In a weather-affected match in Ballarat reduced to 12-overs-a-side on Saturday, Gardner returned her best T20 bowling figures of 4 for 23 as the Hurricanes made 95 for 8.
The hard-hitting right-hander then spearheaded the Sixers’ chase, smashing a game-high 43 off 22 balls, with her side reaching the target with seven deliveries to spare to claim the Sixers’ fourth win in five games this season.
Gardner blasted three leg-side sixes and three fours before she was deceived and bowled by a well-flighted delivery from legspinner Maisy Gibson. New Zealander Suzie Bates and in-form Erin Burns completed the successful chase with ease.
Gardner came to the crease at No.3 after Alyssa Healy hit a full toss from spinner Molly Strano to cover, giving her just 53 runs from her first five innings, 43 of them in one dig.
Earlier, spinners Gardner and Sophie Ecclestone pulled the Hurricanes back after they made a hot start against the Sixers pacers.
They bowled the full complement of three overs after the game was reduced as it started an hour late due to a wet outfield.
The Hurricanes lost 6 for 22 after being well-placed at 71 for 2 in the eighth over. Hurricanes captain Elyse Villani’s lean start to the WBBL season continued as she chipped a Lauren Cheatle delivery to mid-on. South African batters Lizelle Lee and Mignon du Preez gave Hobart good early momentum. Lee smashed two fours and a six before being trapped lbw by Gardner.
Heather Graham hoisted successive sixes over midwicket off Gardner, but going for a third in a row she fell to a good running diving catch at long-on from Bates.
Graham’s dismissal triggered the late innings collapse with Gardner catching du Preez at deep midwicket off Ecclestone in the next over.
Tags: Ashleigh Gardner, Hobart Hurricanes, Hurricanes W vs Sixers Wmn, Sydney Sixers, WBBL