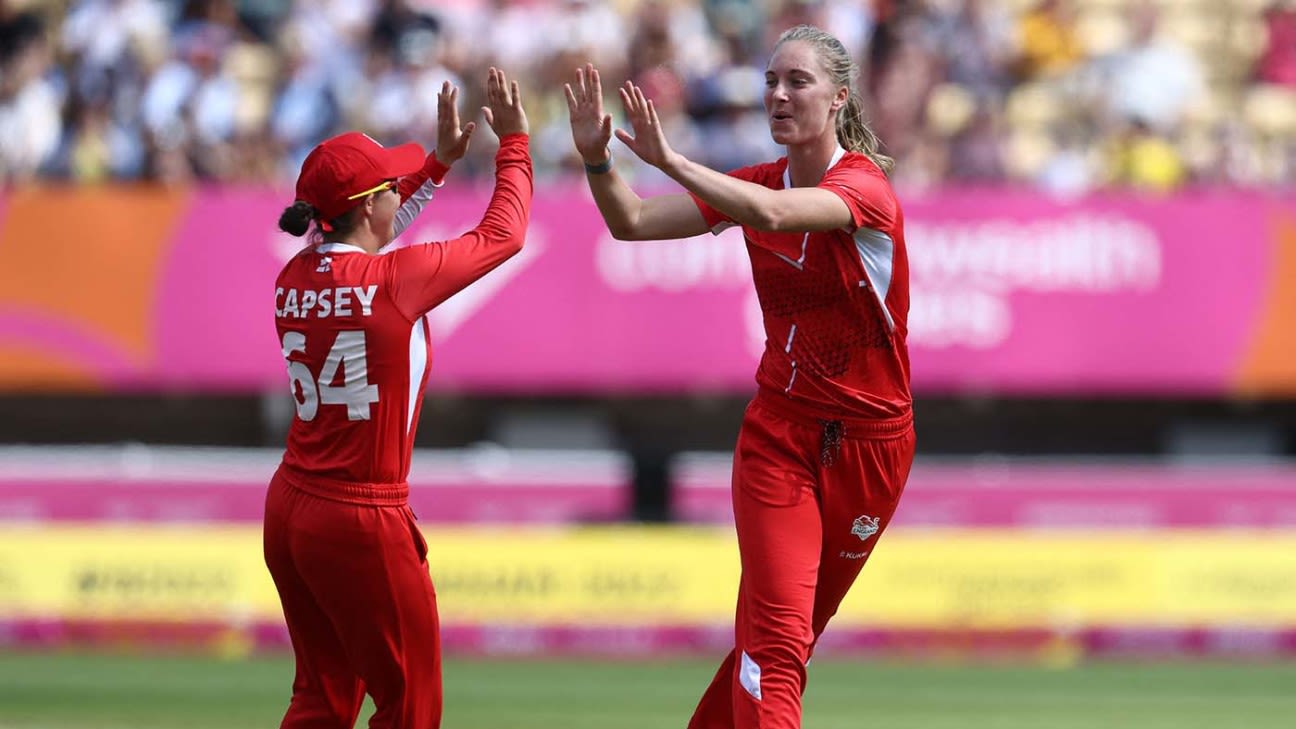 A clutch of England newcomers who made the most of their opportunities at international level in 2022 have been rewarded with central contracts for the coming year.
Alice Capsey, Freya Kemp, Lauren Bell and Issy Wong all made international debuts during the recently ended English summer and join Charlie Dean and Emma Lamb, who first played for their country late last year, as the six new faces on the ECB’s centrally-contracted player list for 2022-23.
Left off the 18-strong list, up from 17 in 2021-22, were opening batter Lauren Winfield-Hill, off-spinner Mady Villiers, allrounders Georgia Elwiss and Katie George and the retired Anya Shrubsole and Fran Wilson.
Allrounder Capsey, who turned 18 in August, established herself at the top level, having been on England’s radar following a successful season in the inaugural Hundred competition in 2021. She earned her opportunity during South Africa’s tour of England immediately before this year’s Commonwealth Games, where she was the host nation’s leading run-scorer and seventh overall, behind a star-studded top-six.
The 17-year-old Kemp, named both the Cricket Writers’ Club’s Emerging Cricketer of the Year and the PCA Women’s Young Player of the Year, became the second-youngest woman to score a half-century for England with an unbeaten 51 off 37 balls against India in September after originally being picked as a left-arm seamer.
Right-arm quicks Wong and Bell earned their maiden England caps in the Test against South Africa in Taunton in June. Opening batter Lamb, who made her international debut in the only T20I appearance of her career, against New Zealand in September 2021, also played in the June Test before scoring 102, 67 and 65 as England swept the ODI leg of South Africa’s tour.
Dean, who impressed during the home series against New Zealand just over a year ago, enjoyed a strong showing at the 50-over World Cup at the start of 2022 and has now played 22 matches across all formats for England. She took eight wickets, including a best of 4 for 53, in the summer ODI series with South Africa as well as three wickets and 108 runs, the second-highest among England’s players, in three ODIs against India in September.
ESPNcricinfo Ltd
Jonathan Finch, Director of England Women’s Cricket, said the introduction of six new players “provides a new look and feel to the group”.
“We have a really exciting 12 months of cricket ahead and we feel this group of players will form the foundations of our side that will take us through various bilateral series, the Women’s Ashes and the ICC Women’s T20 World Cup,” Finch said.
Katherine Brunt, England’s seam bowling stalwart, has been awarded another central contract, suggesting that she intends to play on at the age of 37. Left-arm seamer Tash Farrant, who has been out of action since May with a back stress fracture, also retains the central contract she earned back for the 2022 season, having lost her deal in 2019.
For the first time, England Women’s central contracts will run from November 1, to align with professional contracts in the women’s regional game, which were boosted by a £3.5 million funding increase last month.
England are recruiting for a new Women’s Head Coach ahead of the T20 World Cup in South Africa early next year, after Australian Lisa Keightley opted against extending her contract.
Tags: Alice Capsey, Charlie Dean, Emma Lamb, England Women, Freya Kemp, Issy Wong, Lauren Bell